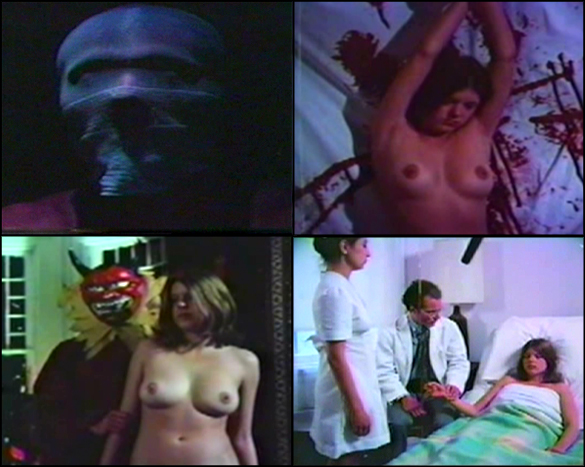 Now, don't get all upset when you see reviews for hardcore pornography amongst these pages. My main criteria for inclusion of this type of cinema are that they're either made by auteur directors like Radley Metzger, or have other aspects of creative interest involved like the sci-fi based Cafe Flesh, the nihilistic The Defiance of Good or this little Satanic horror-based oddity. Of course, the seventies was when pornography hit its creative heights, before videotape sunk the whole area into cookie-cutter banality. So you won't see much outside the 'golden period' on this here website. Satanism and sex always seems to be a good mix, and director Michael Hugo makes the most of it between the requisite sex scenes. There's actually quite a creative imagination at work beyond the orgies. We get artistic or just plain weird scenes that may have had the raincoat crowd way back then, scratching their heads and wondering what the Hell they were sitting - or whatever it was they were doing - in front of. 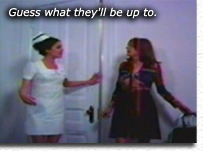 Young, pretty Maria (Dianne Galke) is driven to Fox Hollows asylum by her middle-aged male guardian. Inside we hear that he's signed her over to the presiding doctor, Doctor George (John Seeman, yes really). Maria's apparently a nymphomaniac with masochistic tendencies, but the doctor assures the man dropping Maria off that there's a high success rate with these types of cases. Later, the nurse checking Maria in to her room leans over showing her panties and suspenders, triggering a nymphomaniac attack from Maria who removes her clothes, and cue the required lesbian scene. Later they have a sponge bath together and take their passion a bit further, before Maria retires to her room and pleasures herself with a dildo. That night, she has a strange dream where she seems the same nurse with a slit throat, and naked, flees in terror down a dark corridor. Someone drags her into a shadowy room. Satanic images flash before her eyes, and Maria ends up lying on an altar orally pleasuring two strange, hooded men, their penises jutting through holes in their leotards. A knife appears out of nowhere, and slashes off one of the men's members. Maria wakes up in shock. 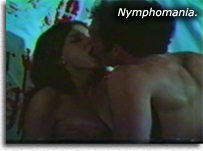 When she wakes again, Maria finds that she's bound 'for her own good' by the doctor, who denies any of the horrors the girl tells him. Soon after she overhears the doctor and one of his associates toasting to her 'exquisite death', and the resultant pleasures, the next night. She tries to run but makes enough of a noise that they hear and catch her, throwing her into 'the room'. This room is one of pure horror, with all the dead, bloodied victims of the coven hanging or lying on tables. The doctor grabs the panicked Maria and forces a kiss on her, to which she can't help but respond with her 'condition'. As they begin to do their business, the other man has necrophiliac sex with one of the naked corpses lying on a table. Maria imagines for a while they are having nice, normal sex in a white room as romantic seventies music plays over the scene. Hugo's camera rotates around them in quite an artistic effect. Soon enough, this is over and they're back in the room of horror. The doctor give us the money shot, ties Maria up and leaves. Maria spends the night in a living nightmare, with visions of the corpses coming to life calling her name, bleeding skulls, writhing penis creatures and more bizarre of all, three floating, disembodied penis-dildo things with sparks coming out of them. Not only that, but these little critters spray the poor girl all over with satanic semen. Apart from that, she has a great evening! 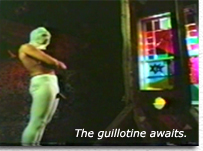 Not all's lost for Maria though. She pretends to go along with the coven's wishes, having oiled-up sex with one of the female members and accepting some sort of potion that will make the ceremony even better. She has other plans, though, and unseen, tips it into a toilet. She goes into the ceremony, which quickly become another naked revelry. Coven members lie everywhere in a mindless, orgiastic, satanic delerium. One man seems to be having sex with a mattress, feathers flying upward in a cloud. Maria pleasures the masked man with her hands, and we get the fulfillment of our Satanic friend, as of course we'd expect in a film such as this. Soon after, the devil-masked man, of course the doctor, motions for Maria to enter the guillotine, it's razor-sharp blade beckoning. Suddenly, Maria picks up the hokiest-looking halloween axe I've ever seen in a cinematic work, and attacks! Mister Feathers gets it in the back, and expires. The doctor gets axed, and that's it for him. Coven members scream, as their intended sacrifice goes berserk among them. One the men grabs Maria and picks up a blunt object to attack her. Can she fend him off and escape the horror of the Devil's asylum, or will she joined their sacrificed dead?

Is Hardgore worth your effort to track down? I'll let you decide once you've read the review. As far as the pornography goes, most of the stuff is pretty run of the mill. Dianne Galke spends most of her sex scenes with other women, and if that's your thing, well, so much the better. She's got a cute face though, and a lovely, voluptuous body, with nary a trace of the hated silicone. So, at least our Maria is nice to look at. The orgies seem a bit lacklustre, but maybe that's just the way it was filmed - they may have been an enthusiastic bunch in the shadows! The big sex scene with the doctor wasn't bad, and the music going along with it capped it off as a seventies sextravaganza. Anything to do with acting is unnecessary in a film like this, and it's just as well, as wooden is the order of the day. No problem there. The music's actually quite good and atmospheric, as well as the sound quality and effects. An actual effort was made to match up the music to the action, and some of the coven's droning is quite creepy. 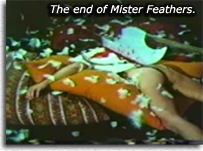