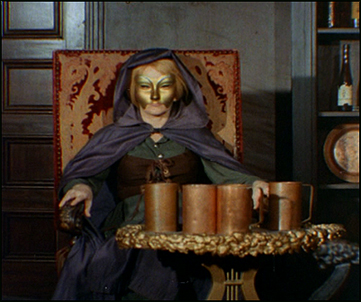 Also known as: The Head Lady

Director Byron Mabe's filmic output needs further examination by cult film enthusiasts. With contributions to the cinematic arts like Space-thing, The Adult Version of Jeckyll and Hide and A Smell of Honey, a Swallow of Brine, anyone who enjoys the art of sleaze will doubtless find something to enjoy. We're certainly looking at a type of film-making that will never again see the light of day. Thank you again, producer David Friedman, for playing a hand in films such as this. Pure soft-core to the core, as it were, there's not a great deal of plot to be had with The Head Mistress. The first image we see is of the titular Head Mistress in the masked version shown above. I have no idea why she's dressed like this, as she's never seen like this again throughout the film! I guess it's a reasonably striking way to a start a film, though.

It's some kind of medieval European setting, and we meet a bearded old (obviously a made-up young) man who narrates the film. He introduces us to a school for well-off young girls and their old gardener, whom I think is called "Newto". Newto is also a youngish man made up with an obviously fake beard! Anyway, our narrator tells us that Newto is getting too old for the job and that the girls are constantly making fun of him - which we never see happening. As they share a picnic in the grounds, they all spontaneously take off their tops and show us their physiques. As happens every day, of course.

A guy and a woman have soft-core sex, the man in undies which is de rigueur for this era of sex film. Then the woman has a bath, dries off and resumes her job in the tavern where Newto's drinking with friends. Newto explains how the girls harrass him, and that he's retiring from the school. He hatches a plan with the young stud, Mario (Victor Brandt) to replace him as gardener and have his revenge vicariously as Mario inevitably seduces all the girls. To get 'round the stern Head Mistress, Mario will pretend he's mute and a bit of a half-wit. Newto presents Mario to the aggressive but beautiful Head Mistress (blonde and voluptuous Marsha Jordan, billed as 'Vanessa Van Dyke') who accepts him, as long as he performs his duties and doesn't cavort with the girls.

Of course, Mario's plan is to do exactly the opposite, and soon enough, as he's pretending to sweep up and work, various girls seduce him. These couplings take up most of the film's one hour and ten minutes, and much as I like watching 'the beast with two backs' having fun, it can get a little tiresome. One of the girls, Philomena (Samantha Scott) is revealed to be pregnant and hangs herself in despair. One of Mario's conquests - a reasonably erotic scene in a bath - is spotted by the Head Mistress. Furious, she calls the girl in for a 'talk' and offers her a drugged glass of wine. She then commences whipping the dazed girl after stringing her up. This is one of those anaemic red-paint-on-the-whip scenes, a direct copy of which is in Space-Thing. It must be a Mabe trademark! Then, in a sadomasochistic sapphic frenzy, The Mistress and the 'whippee' have sex. Later, the calmed-down Mistress tells her protege why she hates men.

In flashback, we get to know the Mistress a little better. She ran her father's boarding house after he died. Meeting the man of her dreams, Mistress falls in love. Two of the male boarders who are possessive of her are furious, and behead the new love with an axe! Burying the head and the body, they then rape the Mistress. In despair and loneliness, she digs up her lover's head and places it in a pot next to her bed. A straggly vine then grows out of it and caresses her sleeping form! When the murderers return and take the head-in-the-pot back to the graveyard, the straggly, tiny vine somehow manages to kill them both. I guess it had supernatural strength. The Mistress explains to her student how she realized at that point that man had exacted his revenge against men. She wanted nothing more to do with the male species after that.

A young man enters the school and demands to know why Philomena killed herself. The Mistress tells him Mario got her pregnant. He goes and attacks the "Gardener", but after some fisticuffs Mario gets the upper hand and the guy confesses that he got Philomena pregnant then abandoned her. I'm not sure why he stormed into the school then. The Head Mistress confronts the bloodied Mario and abuses him. When Mario moves towards her, she brings out her trusty whip, but Mario stops her and proceeds to seduce her, turning her back to world of men. He starts talking again and still tricks her by saying love brought back his voice. They make love again. Time passes, and Mario and the Mistress have a happy life at the school. At least ten girls walk out of the school doors pregnant, so Mario is clearly still up to his old tricks. We see that our narrator all along was Mario, as the old version of the Mistress finally calls him inside.

At about seventy minutes, there isn't much time to be bored, but most of the plot - the back-story of the Mistress and her turning against all men - happens in the last fifteen minutes. Most of the film is the soft-core sex-scenes, which, sorry folks, can get a bit dull at times. None of the participants seem overly enthusiastic, which kind of takes away from the enjoyment for me, and they just go on and on... There's no dialogue throughout much of the film, due to the shoestring recording, or lack of recording, I guess. The music is strictly library material, bombastic at times, pseudo-syrupy at others. I'm probably sounding more negative about this film than I intend, because it is kind of enjoyable, just not an all-out favorite. As a double with Something Weird's DVD release of The Notorious Daughter of Fanny Hill, it's worthwhile picking up to have a few examples of late sixties sleaze.

To keep all perspectives maintained, films such as these had one purpose only and that was to cram rubes into whatever theatre they could play in, to see the nudie-bits and some mild but frequent sex. On that level, The Head Mistress delivers. I'm glad it exists but I don't know if a repeat view is on the horizon.