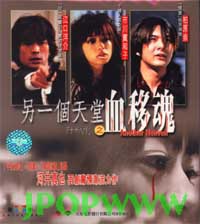 The Japanese are really cranking out some excellent horror at the moment, while Americans (I don't even bother mentioning Australians) were for a while getting mired in post-Scream boring irony. Only recently are we getting some decent horrors from Hollywood. But, I digress. I caught this one recently on cable, and I'm not sure how available it is in a general sense, but it's well worth a view.

It's sort of like a Japanese "The Hidden" or "The Borrower". An evil force is taking over people's brains in Tokyo and making them commit hideous murders. The first crime scene we see has an empty-skulled cadaver and a brain cooking in a pot. All the investigating police flee in revulsion, stifling the inevitable instinct to chuck. Quite a funny scene in the actual viewing.

There's a buddy picture element to this one, with the young and cool Manabu trying to solve the mystery with his gruff older partner, whose name escapes me writing this. Manabu's also trailed by an ex-street girl, Asako, who annoys the hell out of him, but he can't seem to get rid of. She's very persistent, being totally in love with him after he saved her from some thugs.

We gradually work out that the killer is a girl named Chiz. But what sort of girl is this? When she attacks a group of three men, one of them ends up wormfood in seconds, his head twisted around like a broken doll. Another man flees the scene with his jaw smashed by a super-strong kick, the force of which breaks Chiz's ankle. But when the cops arrive, Chiz is lying dead with her skull empty. The survivor is trembling in a corner, soon to take on the mantle of super-killer. What's going on?

It's a battle of wills between Manabu and the next (male) host of evil. We see some quasi-homosexual implications as the will infecting the hapless humans is attracted to Manabu, as he himself has admitted he is attracted to crime itself, not for the love of the police force or helping people. Therefore the thing identifies with the cop, and never kills him when it gets the chance. As the film progresses, we find out it is an essence of evil from the future, seemingly derived from humanity somehow, which lives in a paradise with no crime. Therefore, the thing wants to find a world, "another Heaven", where it can be itself.

After a few more possessions, the creature, dubbed "whatizit", by the police, infects Asako, but her will for goodness is strong. There's a final knock-down, drag-out fight with evil in the end but, 'cause not that many people have seen this film, I won't give the game away. See it for yourself and enjoy.

Director, Jôji Iida, has fashioned an effective thriller with a smattering of gore, a flicker of nudity and some humour in with the violence. Sometimes, perhaps due to the dubbing, I lost track of the story and plot, but hey, it was a fun ride nonetheless, and better than most of Hollywood's recent post-Scream output. The Chiz possession, I found particularly creepy. the film's not an absolute fave like "Wild Zero", but still makes me want to see more of this Japanese wave of superior horror. I really must catch the "Ring" films everyone's raving about.

Give this one a go, by all means, it may well hook you like it did me. Have fun.