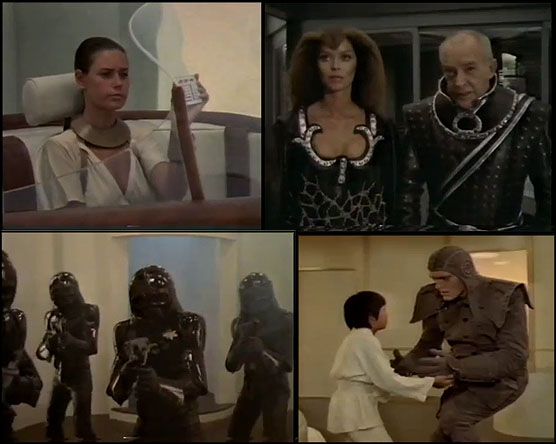 Sometimes it’s nice to just let your brain go numb, and enjoy a simple little Star Wars rip-off from the seventies. Italy of that era did knock-offs so well, and Aldo Lado’s The Humanoid is no exception. It’s actually got a lot going for it, being an enjoyable little popcorn romp on a number of levels. It reminds me of a blend of the wonderful Star Crash and Yor, the Hunter from the Future, two personal favorites. Both Yor and The Humanoid feature Corinne Clery and you can see some of the bad guys’ black armour duplicated between films … all fine by me. It’s also Richard ‘Jaws’ Kiel’s only top-billed role. You may know him as the hulking villain from the James Bond franchise. Kiel doesn’t do too badly, and gets to emote a little in a couple of scenes which are quite touching.

We’re in a future galaxy where Earth is now called ‘Metropolis’ - which we learn through a Star Wars-type opening crawl. Kiel plays the tall, bearded Golob, an affable space pilot who travels with his robot dog companion Kip, an obvious attempt at a canine R2D2. Golob quickly falls afoul of the two villains Lord Graal, a Darth Vader lookalike played by Ivan Rassimov, and mad scientist Doctor Kraspin (Arthur Kennedy). They trap his ship in some sort of tractor beam, and drag him down to the wastlelands of ‘Metropolis’. Viewed as the perfect subject for their experiments, they fire a mutating missile at him and transform him into the mindless, raging humanoid of the title. Graal’s plan is to use Kraspin’s evil science to create an army of powerful, indestructible humanoid slaves and take over Metropolis from it’s ruler (and his brother), “The Great Brother” played by Massimo Serato. In the meantime, Kraspin’s nemesis, Barbara Gibson (Clery) his former assistant who initially sent him to prison for his unethical experiments, is in hiding with the young Tom Tom (Marco Yeh), a sort of juvenile Obi Wan Kenobi figure.

Another villain lurking in the background is Lady Agatha (Barbara Bach) who is in love with Graal, and remains youthful due to taking a serum derived from the blood of young women. This process affords the film it’s single nude scene, as a naked woman on a rack is pierced with multiple needles, to extract the required blood. It’s a strange little diversion in an otherwise light-hearted and virtually family-friendly film. Captured by Graal and Kraspin after an initial ‘Hulk-style’ rampage, the now mindless Golob is given an implant in his forehead which is meant to control him, and sent to track down the hated Barbara. Initially savage and relentless, Golob is calmed by Tom Tom’s mystic powers. The boy manages to remove the forehead implant, and bring back some of Golob’s memories. It’s not a bad little scene as Kiel gets to discard the monster act, and become a smiling human again. Out in the desert, Barbara is saved from Graal’s black stormtrooper-like minions by a pair of mysterious, Jedi-style archers who seem to have a connection to Tom Tom.

With the partially-restored Golob reunited with the robot Kip, he, Barbara and Tom Tom take the battle to Graal’s fortress for the requisite laser battle. Barbara is kidnapped and taken to Lady Agatha’s chamber for the blood extraction process. Golob, Tom Tom and a new hero of the piece, Nick (Leonard Mann), must rescue Barbara and stop Graal and Kraspin’s plan to launch a huge missile full of the mutating compound and transform most of the population into servile humanoids. Barbara is soon saved by Golob as Nick does battle with the fiendish hand-laser powers of Graal. Will the power of good win over the power of evil in this strange world of Metropolis?

I guess I was in the mood for The Humanoid the night I watched it, as I enjoyed it immensely. Everyone in it seems to be giving it their all except, unfortunately for Corinne Clery who seems a bit grumpy and disengaged in this film. Compare her Barbara Gibson to her level of enthusiasm as Kalaa in Yor, and you’ll see what I mean. Other than that, we get the required scenery-chewing from everyone else. Graal is a laid-back, quiet villain and probably fails as a terror-inducing fiend like Darth Vader’s initial appearance. Arthur Kennedy as the vengeful Kraspin however, relishes his character and effectively takes over from Graal. Richard Kiel has quite a lot of dialogue in his early scenes as Golob, before he becomes our growling ‘Humanoid’. He doesn’t do too badly with his lines, and effectively conveys an innocent, simple soul before the mutation missile hits. I was somewhat relieved when he regained his humanity - and a bit more dialogue - two-thirds of the way into the film. I even enjoyed the juvenile stand-in for Obi Wan Kenobi, the mysterious Tom Tom, who has a positive influence on everyone around him. I particularly like the scene where he asks the zombie-like Golob to allow “your essence to return to your body “… and Kiel’s face softens, and becomes expressive once more.

The music of The Humanoid by the rightfully well-known Ennio Morricone is fairly non-descript, but doesn’t do any lasting damage. Still, it’s a long way from the Sergio Leone Dollars trilogy. The special effects are pretty much what you’d expect from a film of this era and type, but are not as bad as you might think. The explosions aren’t great but some of the ‘giant ship flying overhead’ scenes are quite nicely done. A lot of the budget was probably spent on costumes as the various storm-troopers, baddies and robots all look pretty good. The dog-robot Kip is, admittedly, a failed attempt at a cheap version of R2D2, and probably generates most of the derision this film would get from viewers, but I didn’t mind him. Space opera is riddled with such failed, oddball creations. Still, the technicians should have given him a better sound effect that what he comes out with. It’s pretty grating! Nonetheless, Jar Jar Binks still sits a few rungs higher than Kip for the annoying factor.

So if you’re in the right mood for a space opera from a bygone era that wears it’s Star Wars influences proudly and unashamedly, you could do a lot worse than a view of The Humanoid. Aldo Lado (billed here as George B. Lewis) has put some effort into the final product, and it should be considered up there with vintage gems like Battle Beyond the Stars and the aforementioned Star Crash. It’s a fun night in with some popcorn, and a forgiving state of mind.