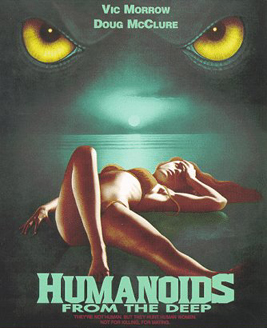 I'm a sucker for a good B-movie, any of my slavering underlings will tell you that. Don't listen to the one with the lazy eye and the hump, he's a treacherous one, but generally it's all true. So casting one's watery eyes over "Humanoids from the Deep" elicited much enjoyment, as it has just about every schlocky quality you could need from the B-zone. The eighties were a good vintage, don't believe what anyone tells you.

This one has a particularly fine aroma. So what's the lowdown? A fishing village in the land of the Yankees is experiencing some strange phenomena. One boat explodes for no real reason, but we, the viewers, know what the culprit is, some sort of monster, of which we only see the scaly hand working mischief. The village already has it's own problems, though. A salmon cannery wants to take over the fishing business, and has strongman Vic Morrow (in mean mode) and his redneck friends pushing their weight around, particularly with an Indian resident. Just so we know he's bad, he picks on the poor Indigenous folk. The team of thug's dogs are killed by something mysterious, and they blame the Indian guy, killing his mutt as well.

At a local dance, fighting breaks out amongst these combatants. I love cheap fight scenes. You can't feel a single blow landing, but hey, there's lots of whacks and walloping sounds. Soon we get the traditional horny teens out in the ocean scene, along with POV shots of the aforementioned teens, as they get swept away and the guy gets gorily mauled by a humanoid from the deep - a large, fishy looking monster with a big-brain head and long clawed arms. It's actually a pretty good monster costume. Okay, so the guy gets his face ripped off? What happens to the girl? Well folks, this is the one of the few instances in schlock cinema where the monster actually rapes the female victim, instead of just carrying them off. We actually see tops being ripped off, and the thing sort of humping the screaming victims. Look, in 1980 it was probably controversial, but it actually all seems pretty mild these days. Jaded, aren't we? It's a very quick, non-graphic rape, but you certainly get the idea of what's going on.

Anyway, the nominal hero, the Indian guy and a scientist lady working for some company try to work out what's going on. They track the creatures back to their spawning ground - the beach - and find comatose women wrapped in seaweed - probably impregnated. They also find lots more of the "humanoids". They can be shot dead with enough bullets, but the numbers of creatures are high. With the women in hospital, The scientist works out what the monsters are. Mutated fish who have eaten biologically enhanced salmon she created, along with her cohorts. These mad scientists are always trouble!!

Soon, there's some sort of big Salmon festival near the pier. Of course, it's the perfect place for the monsters to attack en-mass. Oh, it's bliss. Lots of top-ripping, gore spraying action takes place. Lots of screams - actually the same scream over and over. I guess the extras budget was a bit low that day. Well, it seems like the monsters have all been burned, bashed and shot to death, and order and peace restored. But is it, really?

Cut to the hospital. One of the monster's victims is giving birth, but she looks strange. There's sort of slime on her face. Suddenly, a nasty little "humanoid" creature bursts from her belly, and chaos reigns! Didn't see that coming, did you?

Director, Barbara Peters - yes, a women directing a "monster-rape" film - has fashioned a classic in the oeuvre of the B. There's really nothing technically wrong with it - the filming, music, costumes, acting and so forth are all quite competent. Even the men-in-rubber-suit monsters, created by future makeup maestro Rob Bottin, are quite impressive and creepy in some shots. It's just the central premise, which seems sorta fifties or something, dragged into the graphic eighties, that's something to be savoured. And we've gotta have that jolting ending. Where would an eighties horror be, without it? I also love the schlockiness of the gratuitous non-rape nudity and the gratuitous gore as the villagers are attacked during their festival. I think ol' Barbara was having some fun here! If that was really her/his name... you have to wonder if it's a guy behind this.

To sum up, watch it in the right spirit and have a trashy old good time. Just don't invite any radical feminists and you'll survive, nay, enjoy the experience.