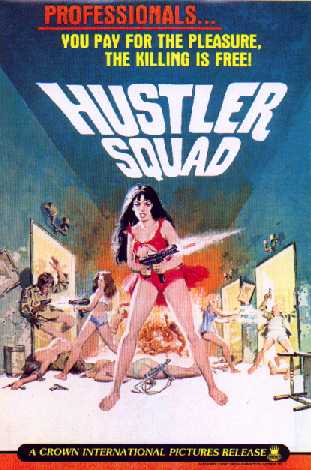 What an odd little film. I couldn't resist buying this little number for one dollar at a video store near my place ... after seeing the poster in a movie poster book. I knew nothing about the film, other than the title and the poster you see before you. And what a title it is, you'd have to admit. What's it all about? What's the genre? Here's a stab at it, folks. It's sort of a ... light war movie with a touch of humor and sleaze. I do mean touch, because with a name like Hustler Squad, wouldn't you expect wall-to-wall sex? Sorry, bzzzt. There's only a couple of nudie bits but I guess this is the essence of the exploitation experience - tease them along and in most cases give them very little! The film's still quite entertaining in it's own way, though. Let's see what director Cesar Gallardo has put together for us.

It seems to be World War Two. In the Phillipines, a group of important Japanese officers are gathering for a celebration at a well-known brothel. For some reason I can't remember, the American Officer in charge of the operation to assassinate them, Major Stony Stonewall (John Ericson) can't make it in with regular troops. So he devises a unique plan. To gather four women from different background to pose as prostitutes in the brothel, who, at the critical moment, will kill these men and disable the Japanese cause in the Phillipines.

For some reason, Stony gathers together his Hustler Squad in Australia, where we're subjected to some of the worst fake Australian accents this Aussie has ever heard. And th most badly choreographed pub-fights. He recruits a jailed, murdering nymphomaniac with nothing to lose, a prostitute on the run from the mob, a dying army nurse (who is the sweet one of the group) and a vengeful Phillipino woman who lost her family to the "Japs." Putting these soft bodies through some rigorous, comical training and some bizarre big-band music to accompany the proceedings, Stonewall soon comes up with some capable soldiers. Well, sort of.

After the project is nearly called off by some disgruntled generals, the Hustler Squad soon truss them all up in the middle of the night, and show them how tough they are. With the plan green-lit once more, they are all off to the Phillipines. At first there is some proper military-style fighting. Then they're dropped off to the Brothel and the battle is on for all their lives, once they begin to seduce and destroy.

If you need full-on sex and violence, please give this one a miss. There's not that much blood or naked frolicking, maybe a few scenes at the end but not enough to justify a hire. It's more of an action film, with endless scenes of Philipino extras posing as Japanese, getting mown down by machine-gun fire. Still, with a basic premise like this, it's worth a view to trash afficionadoes. The action scenes have an odd, frenetic quality which is quite unique. Sort of sped-up, but not. John Ericson is having fun with his sleazing army major, and he women have a good deal of charisma in their roles, seemingly enjoying themselves thoroughly. You've got to see the part where the nymphomaniac jailbird Rose Carson (Nory Wright) winks at the Army General. It's a hell of a wink - wink at me and I go to water - and worth every cent of the one dollar I paid for the film.