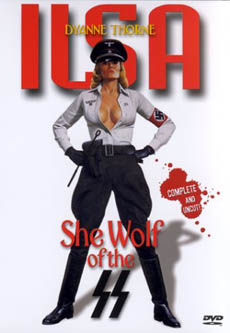 I have to admit, I was a bit scared to watch this film. I've read it described in various ways, somewhere expressed as unbearably intense and graphic, a veritable maelstrom of sickness, violence and perversion. Nonetheless, in the spirit of testing oneself, I bought this film from Polyster Books in Melbourne, Australia, and plonked myself on the sofa for some fine family viewing. What was the outcome?

Well, let's look at the plot outline, what there is of a plot, anyway. It's World War II, and in a concentration camp, Commandant Ilsa and her evil, blonde female cohorts are experimenting sadistically on various Jewish women and men. Mainly naked women, by the way. The men are tested sexually by the large-breasted Ilsa (Dianne Thorne) and as they all fail to please her, are then castrated and sent back to the camp. The women are tested viciously by Ilsa, who is trying to prove her theory that women can withstand more punishment and pain than men. And boy, does she put these poor unfortunates through their paces. Fortunately, none of these scenes are particularly well-filmed or convincing, otherwise they'd be unwatchable. The first castration scene borders on this, as the actor involved conveys real pain as he's mutilated without anasthetic.

Okay, so this is primarily a film about torturing naked women, so what happens to them? Ilsa and her cronies whip women (and men) to death, insert electified dildoes into them, explode them in decompression chambers, boil them alive, have them gang-raped, hung as they stand on blocks of ice, give them disfiguring diseases and have live maggots breed on open wounds. One particularly strong woman who stands up to Ilsa is tortured over the course of the film until she becomes a bloody, mangled, but still living, mess. We never find out exactly what's being done to her, but she gets worse every scene.

In the end, an American prisoner who finally, sexually pleases Ilsa leaves her vulnerable, and starts a chain reaction which leads to revolt and the tables are finally turned. Her own countrymen finally do her in though - she has become a risk even to the Third Reich. I won't give away every detail of this, as you need to see exactly what happens and who survives.

Filmed using the sets from "Hogan's Heroes" - yes, really - there's virtually no narrative to this unbelievable film. It's just torture and sex, through and through. Some of it's laughable, given the right perspective, and even feels like a bad Hogan's heroes episode. Some of it is cringe-worthy in the nastiest way, like the castration scene. Maybe it's because I'm a male. All of the acting is pretty much camped up, the male Colonel or General or whatever he is, who turns up towards the end, urging Ilsa to one unusual sexual act, is completely over the top. Music, cinematography, direction is all nondescript. It's really a film that travels on reputation alone. Some of the reputation is partially deserved, but most of it is done through makeup and static camerawork. I certainly didn't have nightmares that night.

Not entirely recommended, unless you are a completist of sleaze or exploitation cinema. Otherwise, you may be better off casting your net somewhat wider for filmic gems.