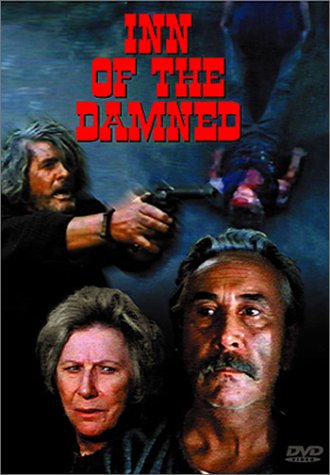 Well Folks, I finally caught up with Inn of the Damned. Found it on Amazon in DVD format, to my amazement. Was it worth all the years of waiting? In a word ... Bleeechh!

Generally, my approach on this website, when reviewing movies, is to enjoy them and write about them in a positive way. After all, I have no experience in making a movie so really, who am I to badmouth and criticize? In addition, hailing from Australia, I feel duty-bound to dig up weird Australian movies, and bring them into the light again for all to see. Unfortunately, this one was a vast disappointment in all respects.

Director Terry Bourke has tried to create a sort of gothic, Australian-set historical horror-thriller, but dilutes the film with so many weakly-mounted threads that the whole piece falls apart in the end. I'll run through the plot so at least you'll know what's going on. It's the late 1880's in rural Victoria, Australia. A Merchant and his hooker girlfriend are taken in their travels by a slimy coachman, to a remote Inn in a dark forest. Well, given the camerawork, most of the movie seems dark, I must say.

Soon enough, after being greeted by the elderly German Innkeepers, Caroline and Lazar Straulle (Judith Anderson and Joseph Furst, respectively) the "couple" are murdered and robbed of their belongings. We find out later that the main weapon of this lethal pair is a giant weight which is lowered on people in their beds, but it's so ineptly filmed it just looks like a curtain coming down on them. The "coachman" is actually their accomplice, Biscayne (Robert Quilter) a convict on the run from the police and bounty hunters.

As Biscayne is now attracting police, the deadly old couple must murder a Constable (Tony Bonner) who stays with them overnight. He's done in by the frightening method of poisoning him offscreen. Mmmm, Scary. We find out what caused their madness in one of those cliched "shimmery" flashbacks. An insane convict abducted and murdered their two children, a boy and a girl. This sent them over the edge, and now they murder anyone who enters the premises. An American Bounty Hunter Kincaid (Alex Cord) - obviously inserted to attact the American audience, is part of the team pursuing Biscayne. After we're treated to him eating fruit off a naked hooker's stomach, he finally shoots the convict dead after a ludicrously protacted and histrionic scene. Most of this whole convict-pursuit plotline, featuring a drunken character played by seminal Australian actor John Meillon, is clearly intended to pad the movie out to a full running length.

A woman and her young step-daughter, with whom she has nude-baths and some sort of exploitative lesbian relationship, turn up with her driver and are despatched with that wonderful poison again. Finally we're treated to the set-piece murder, where the driver is stabbed twice and finally killed with an axe to the head. In the end, the husband/father of the two women turns up, and events begin to transpire against our lethal oldies. The Police reappear, looking for their lost team-member, and try to break into the Inn. Armed with shotguns and axes, the Straulles try to kill or repel them. And so our film reaches it end.

I guess Inn of the Damned sounds like it has a bit of everything for trash fans, but really, a smidgeon of blood and nudity does not make up for appalling silent-cinema style acting, lightless cinematography, completly inane dialogue, an atrocious score, completely overt padding and the cynical placement of an American character to sell the wretched thing overseas. The only thing that vaguely touched me were the closing credits, showing the father playing with his children, before they were taken from him. Bourke seems to put more effort here than in the whole film.

Definitely give this one a miss, my little lovelies, unless you're a completist for Australian cult, trash or exploitation cinema. Sorry about all the uncharacteristic knocking of a given film, but this one really annoyed me, and I could barely sit through it. This DVD is probably bound for Ebay, somehow!