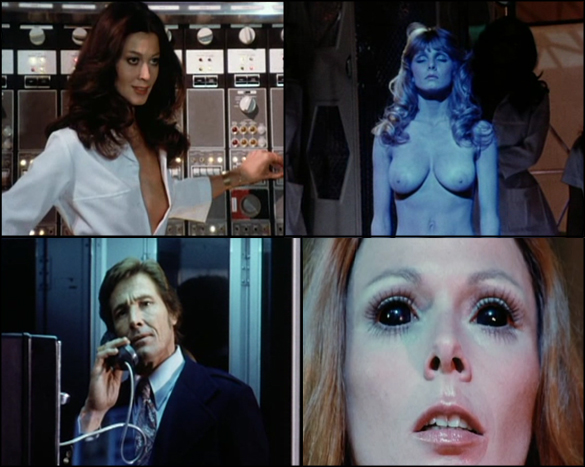 A team-up between big bad William Smith from many a classic biker film, and the pneumatic Victoria Vetri, the bikini-clad cave-girl from When Dinosaurs ruled the Earth, would seem to be required viewing for fans of cult cinema. Invasion of the Bee Girls does end up being an enjoyable view, although with sound production values perhaps ensuring it doesn't go too far with it's exploitation elements. We're kind of talking the Stepford Wives with a touch of sexploitation, this time with the women actually loving their partners to death. 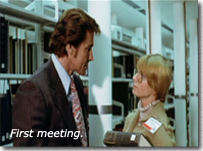 Something's wrong in Peckham, California. It's men are dropping dead of congestive heart failure, seemingly brought on by sexual exhaustion. One of the deceased was John Grubowsky, a bacteriologist working at the government-sponsored Brandt Research Institute. This calls the attention of Neil Agar, (Smith) a security agent with the State Department, who's sent to investigate. During the course of snooping around he meets the laboratory’s sassy head librarian, Julie Zorn, (the buxom Vetri). They have a obvious rapport from the beginning and she decides to help solve the mystery. He also begins interviewing the firm’s leading scientists, who seem to be a bunch of middle-aged lotharios from all accounts. 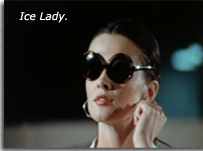 The local sheriff, Captain Peters (Cliff Osmond) calls a town meeting as the "deaths by sex" begin to accumulate. The Laboratory’s leading sex researcher, Henry Murger, (Wright King) urges the townsfolk to practice sexual abstinence – a concept greeted by howls of derision by the locals. Later, Neil and Julie arrange a meeting with Murger afterwards to discuss his theories as to what's causing the deaths, only to look on horrified as he's run over and killed by an unseen driver. Further snooping around by Julie ends up with a rape attempt by a gang of toughs, but Neil intervenes and punches them all out. The sole purpose of this scene appears to be to show us Vetri's ample breasts, and Smith show us his tough-guy credentials. Once Neil and Julie have recovered from this, further investigation of Murger’s life reveals a secret room in his house, concealing sexual paraphernalia and Murger’s gay lover, Joe. After some tough-guying from Neil, Joe admits he saw Murger driving off with an unknown woman sometime before his death. 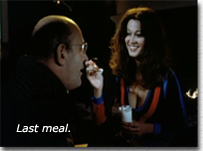 As the death-count grows, the military impose a complete quarantine of the town and a curfew. Still, the lothario-scientists continue their lecherous ways. One of them, the married Herb Kline, (Ben Hammer) is approached by Susan Harris, (Anitra Ford) an entomologist working on a project involving bees. The scientists describe her as an “iceberg,” yet still she flirts with Kline and invites him over for dinner. Susan appears seductive but seems to place an odd emphasis on feeding him a sweet, sugary desert. They begin to have sex but soon he sees her pitch-black, shining eyes - we see the insect-like compound vision from her point of view - and Kline soon dies of the same heart attack that claims the others. 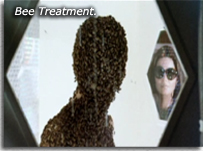 Putting the clues together, Neil begins studying the sexual patterns of insects. Seeking information about the mating habits of bees, he confronts Susan at her lab, but she successfuly fobs him off. She then continues her bizarre project, having tricked Klein's wife Nora - still ignorant of her husband's death - into her clutches. Holed up in her lab, she places Nora into a mysterious trance, then Susan and other mutated "Bee Girls" cover her in some kind of white glop. Once completely covered, they place her in a chamber and watch as irradiated bees swarm all over her. Once the bees depart, she's peeled out of the white cocoon and emerges as a naked Bee Girl, with black compound eyes and a drive to fatally mate with males just like the others. When Klein's dead body is discovered the next morning, Captain Peters goes to inform her Nora, only to have her unsuccessfully attempt to seduce him, wearing the sunglasses that need to disguise the black eyes of a Bee Girl. 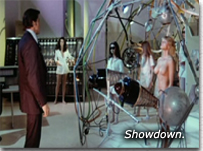 His fine detective mind having solved much of what's taking place, Neil summons the scientists together to present his theory. The head of the diagnostics department, Aldo Ferrara,(Andre Philippe) is the most willing to listen. Later, at a funeral for one of the many victims, Neil and Julie bring a radiation detector, which picks up the gamma radiation coming from the small group of sunglassed Bee Girls who happen to be there. Moving to kill anyone who suspects what they're up to, Ferrara dies during a visit by Susan, who then lures Julie to her lab to be transformed. When Neil discovers Ferrara’s body, he realizes what's going on. Racing to the lab, he interrupts the women as they begin the process of turning the naked Julie into one of their number. Susan threatens to kill the hypnotized Julie, unless he leaves. At the last second, Neil pulls out a gun and shoots at the banks of flashing machinery. He manages to carry the naked Julie away, but will they both escape the crazed Bee Girls as the Lab begins to explode, or is it all over for our man-devouring insect ladies?

Director Denis Sanders has fashioned a pleasant little night's diversion, but compared to some of the films covered in these pages, it's a pretty lightweight effort. William Smith is a presence but playing a thoughtful good guy - albeit with small outbreaks of toughness - probably doesn't utilise he strengths. Of all the actors, Victoria Vetri seems to be enjoying herself the most, playing the Librarian with sass and attitude. Being a Librarian myself, it's nice to see the profession played a bit differently to the standard cliche. It's a pity her stunning body isn't shown off more - her main nude scene is under blueish flickering lights and very brief. Anitra Ford is an interesting presence with a slender body, a sly smile and heavy-lidded eyes. She's not a typical Hollywood beauty, having a more quirky look that suits her villain role here. Her sex scene with the balding Ben Hammer is odd, really just her teasing and rubbing up against him. I guess if you're a mutant insect-woman that's how you do things before you kill your man. The whole converting women to Bee Girls project is never really explained. Susan never gives a single reason as to why she explored the whole experiment in the first place. Still, I guess we wouldn't have a film if she hadn't.

I suspect that under a different director we could have had a more extreme example of exploitation cinema here with Invasion of the Bee Girls.Under director Sanders it's well-made, clearly with a decent budget used on competent actors, decent sets for the laboratory and some nice cinematography. Because of that though, they couldn't go too far with softcore sex scenes or graphic gore - although Susan's ultimate fate is a little jolting and unexpected. As a result some scenes feel cut short, or diluted to some degree. This quibble aside, Invasion is still a lot of fun. It's nice to see the chemistry between Smith and Vetri, and we can lament Anitra Ford's short career as she's a fun evil vixen in this one.

Definitely worth at least one look, but you may not want to visit the Bee Girls again, unless you're a diehard William Smith fan.