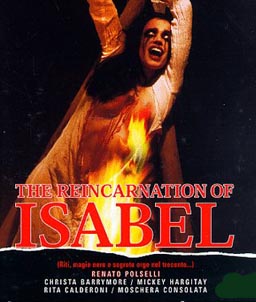 The Reincarnation of Isabel (1973)

This is one of the most incoherent, insane pieces of Italian exploitation cinema I've ever had the pleasure to come across. It's like a film Ed Wood Junior would have made if he lived in Italy in the Seventies, and had the urge to make a sex-vampire-witch-horror extravaganza. However, he didn't make this gem, it was made by a certain Renato Polselli, who's contributed a classic to weirdo cinema if ever there was one.

Is there a plot, then? Well, sort of. I believe myself to be a reasonably intelligent, rational person, but this one had me baffled by its backflips and unintentional twists. In a backwater in Italy somewhere, a girl has been kidnapped by Satanists in tight red leotards. Mmmm. In a castle basement somewhere, and to the accompaniment of endless wolf-howling, they sacrifice her drugged, naked form in honour of a strung-up, glassy-eyed female corpse referred to as ... Isabel. Another girl dies that night - lots more wolf-howling - her heart gorily ripped out by a strange man. Jayne Mansfield's husband, Micky Hargitay, has moved his entourage into the castle. It seems his soon-to-be-married step-daughter, Lauren - the pulchitrudinous Rita Calderoni from "Nude for Satan" - is the reincarnation of a witch called Isabel who was staked and burned alive by a village mob 400 years ago. Hargitay is a reincarnation of her former lover, Count Dracula. Dracula prayed to Satan to bring Isabel back to life, and so he became the first vampire. Which is strange because one of the characters calls Isabel a witch and vampire, so who came first? In fact, all of the modern-day participants seem to have their 400 year-ago equivalent, sort of a mass-reincarnation effect.

After some odd incidents like a lesbian being bitten by a "vampire" - none of these vampires have fangs - and trying to seduce her lover into the fold, who is killed by the Satanist-vampire-witches, the evil ones attack the village girls en-masse to make enough sacrifices to bring the very-alive looking, centuries-old corpse of Isabel back to life. They all come in wind-blown open windows to attack the clothed girls, who suddenly become nude, and cart most of them off to the sacrifice-dungeon. Micky Hargitay tries to convince Lauren to take on Isabel's soul or something, by staring into some sort of globe, but I had totally lost the plot by now. In the meantime, two of the girls attacked by the vampires are accused by a group of ravening villagers of being possessed and witches, and proceed to scratch them with sticks and force them to pass through a burning 'altar' into the netherworld of the Satanists. Why? You tell me! Maybe so they can show the nude girls being tormented. And while all this is happening, we have a comic-relief threesome happening in the castle somewhere, with appropriately absurd piano music. In the big conclusion, yet! Finally there's a showdown between some maybe-good reincarnated villagers and Micky and his vampire friends. Will good win out and Lauren be saved, along with the kidnapped girls?

In all honesty, I can't really tell you, even if I had wanted to! This film must be witnessed to be believed. Without spoiling the end, the chained-up, naked kidnapped girls are totally forgotten. Then, we hardly even know who's supposed to be "good" or "bad". The scenes of Isabel being staked and burned near the beginning - she's a tough one ... after being staked she's alive and moaning for what seems like forever - portray her and Mickey as wronged victims and good guys. Then she's described as an evil witch and we glean that her and her accomplices are bad. One particular pop-eyed character who holds the book, the key to events, seems evil - he's in love with Isabel/Lauren - then tries to fix things at the end. I won't even get into the deformed hunchback type character, I've no idea what his character is there for. All I know is that he falls into the "snake pit" - there's all of two snakes in it - and all Hell is meant to break loose, which basically means the camera spins and shakes to achieve this effect, and there's all manner of whooshing noises.

In summarising the plot for you, I've barely touched on the visual, technical and aural delights of the movie. The soundtrack is a joy to the ears, being all seventies base-grooves, women groaning and wailing, and dogs howling. I know that sounds hard to imagine but you'll see - or hear - for yourself. Polselli's horror-effects are often just flashing multiple-coloured lights on people's staring faces. It looks pretty, but frightening? I'm not so sure. Another effect is turning the image sideways, shaking it around or even just placing it upside down. It's a hallucinatory film, I tells ya! There's even some wonderful day-for night shots where the crucifix bursts into flame - one moment the "possessed" vampire-victims are in broad daylight, next pitch darkness. Speaking of flames, watch for the fire that's meant to be consuming Isabel in the witch-burning scene. That's all I'll say! On an acting level it's very ... i>Italian. Much gesticulating, yelling and eye-popping. If it weren't for the yelling, we'd be in silent-movie mode. I hope I don't sound too much like I'm mocking "The reincarnation of Isabel", because I do love this film. After reading Phil Hardy's encyclopedia of horror, I just had to see and own it, and it was worth every cent.

If your taste leans towards Italian horror-sexploitation, cast your watery gaze over this one. One gets the impression Polselli went all-out in every way on this film, though I've yet to see any other of his works. Even if it were technically capable, it would still be a masterpiece of cinematic delirium. And I love it when I can use those terms!