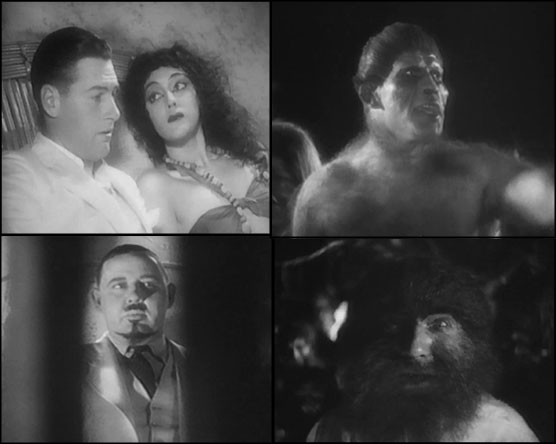 This atmospheric piece of golden era horror would have to be prolific director Erle C. Kenton’s finest hour. Later he’d give us Universal’s Ghost of Frankenstein, House of Frankenstein and House of Dracula, all enjoyable efforts. In this case, paired with actor Charles Laughton and cinematographer Karl Struss, a masterpiece is delivered. An adaptation of H. G. Wells’ The Island of Dr. Moreau that would offend many at the time with it’s implied violence, torture and from one point of view, bestiality, Island was banned until 1958 when cuts were made and finally approved. We’re lucky it finally saw the light of day in any form, and it still holds up well and delivers a lingering feeling of unease in many moments.

Shipwrecked Edward Parker (a servicable Richard Arlen) is taken on board a ship headed for Dr. Moreau’s (Laughton) secret island. Offending the drunken captain, he’s thrown overboard and stranded with Moreau, his associate, Montgomery (Arthur Hohl), a doctor with a shady past, and the bestial looking natives. Accepting Moreau’s hospitality until a boat can arrive, he’s introduced to Lota (Kathleen Burke) a beautiful but strangely simple island girl. After finding Moreau and Montgomery seemingly operating on a man without anaesthetic, Parker attempts to flee. Running into the jungle, he’s surrounded by the beast-men until Moreau appears, cracking a whip and enforcing his law – not to go on all fours and not to spill blood. “Are we not men?” says the “Sayer of The Law”, a hair-covered Bela Lugosi who echoes Moreau’s decrees. Rescued, eventually Parker receives the truth from the strange doctor. For years, Moreau has been experimenting on animals and through surgery, blood transfusions, hormone injections and ray baths, has sped up their evolution to the point where they are all talking humanoids. Unfortunately the process is extremely painful and takes place in what has become known as ‘The House of Pain’. He says that Lota is the sole woman on the island, but hides the fact that she is derived from a panther. Moreau is excited about the possibility of mating Lota with Parker and producing offspring, indeed proving she is a complete woman. Moreau destroys the one boat that could have taken Parker away but blames his beast-men.

Parker does start to fall in love with Lota but is wracked with guilt, having a fiancée desperately looking for him, Ruth Thomas (Leila Hyams). Kissing Lota, he’s horrified to feel Lota’s nails piercing his back – three-inch long claws that reveal her animal nature. Pressing Moreau for the truth, the doctor finally reveals all – that Lota is his most perfect creation. Parker demands to be allowed to leave or he’ll tell the world of Moreau’s illegal experiments. Moreau notices Lota crying and realises she is more human than he dreamed – he will take her to the House of Pain and ‘burn’ the rest of the animal out of her. Montgomery secretly objects to more torture, and wants to leave the island.

Meanwhile, Ruth turns up on the island with Captain Donahue (Paul Hurst). Moreau now has more subjects for his experiments, but one of his beast men, Ouran, has taken a shine to Ruth and tries to break into her room. She’s rescued by Parker in the nick of time and Donahue leaves to get his crew and sort Moreau and his evil scheme out. Moreau sends Ouran to strangle him, which he does successfully. However, this turns the tables on the crazed Doctor. Ouran reports back to the Sayer of the Law about his mission, which reveals Moreau as a hypocrite. They realise that he is not a god but a man who can be hurt or killed. That his laws are meaningless unless they are for everyone. Moreau appears and attempts to quell the unrest but they turn on him and in a horrifying scene for the time, drag him to the House of Pain and tear him apart with his own surgical implements. Parker, Ruth and Montgomery flee the rebellion , Lota dying while defending them from Ouran, who also expires in their fight. Finally they make it off the burning island in a small boat.

Filled with a tantalising shadowy, cinematic atmosphere, Island of Lost Souls is a must-see for any fan of horror cinema. Laughton’s quiet, sinister performance, decked out in a white suit and cracking a whip to subdue his creations, is a joy to behold. There’s no melodrama here, Moreau is not a cackling super-villain, just quietly hell-bent on scientific success. Kathleen Burke as Lota is also sensuous in her innocence, her makeup and movements genuinely giving the impression of a cat who became a woman. I love it when she stretches back in Parker’s arms, instinctively attracted to him. The makeups for the beast- men are all effective for the time and quite creepy in the dim light. Bela Lugosi’s small role as the Sayer of the Law still has impact due to his rich voice and fierce eyes, other than that he’s completely obscured by hair. The final rebellion by Moreau’s creations is the standout scene as they approach in a frenzy, his whip cracking about their necks but doing nothing to slow their approach. His screams as they tear into him with the surgical instruments – off-screen, of course – send a jolt through jaded audiences even now.

It’s a great shame Island of Lost Souls was so hard to find, for so long. I guess the more inhibited, prudish audiences of 1932 could see Parker and Lota’s budding relationship as bestiality but I can’t see it that way as she was basically a human being other than the claws! Fortunately for us, this classic from the golden age of horror been revived with a decent Blu Ray release, and fans who have never seen it should really do themselves a favour. It’s not often a horror film from umpteen decades ago can make you think and give you a shiver, but I think this one can still do it.