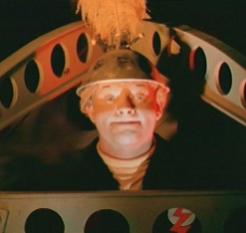 Really, this film has to be seen to be believed. Harry H. Kovac has a long career in the production of sexploitation cinema and this early little effort is a must-see. A classic nudie-cutie, the whole endeavour is so ridiculous, that any misogyny running through it is hard to take seriously. It's got Universal-style monsters, semi-naked (and naked) women, ludicrous dialogue and sixties go-go/surf music. What more could you want? A plot? Oh, come on now.

Well, there is a sort-of plot, which I'll do my level best to explain. Hailing from the Planet Droopiter of the Buttless Galaxy, the alien Sterilox, (a Stan Laurel impersonator in a feathered helmet which constantly fall forward on his face) lands on the planer Earth looking for women to take back as servants. You can tell the level of humour here from the names just described. But hey, I enjoyed it. Anway, Sterilox is only after servants beacuse the Buttless aliens are asexual. They breed by splitting themselves in two.

So Sterilox lands in the Laboratory of Dr. Breedlove, an actor doing a Bela Lugosi impersonation but made up (badly) to look like a perverted Dr. Strangelove, because that film was doing the rounds at the time. We have already been introduced to "Kissme Quick", a buxom woman in lingeree lying on Breedlove's operating table as Frankenstein-like electrical gadgets buzz and hum, and a skull imitating Peter Lorre makes silly asides. Well, of course, given this is a nudie-cutie, the women strips down to just panties under the influence of "the sex machine", as Breedlove calls it. I'm not exactly sure what this device is meant to do other than inspire people to strip off and look ecstatic.

Sterilox and Breedlove seem to make friends as soon as the alien pops into his dimension, and explains his mission. He introduces Sterilox to his "Sex Bombs", three topless dancing girls who groove to the best, sleaziest go-go music I've heard in a while. I had in on my mind for days after listening to it. It's a great number, but then the film slows down for a while as we get a guided tour of Breedlove's dungeons and labs, meeting all the women who will strip for us to sixties lounge music. Insane, isn't it, that naked women can get boring after a while, but it does happen! Fortunately, Frankenstein's monster, Dracula and the Mummy appear at intervals, of course to be the butt of Breedlove's jokes. Still that's what you expect from a film like this, and though the humour is weak, it's still such a unique film you have to keep watching.

Finally, after inspecting all the women, Sterilox falls for an all-purpose vending machine and wants to take it back to to Droopiter. However, the maintainer of the machine is Kissme Quick! She returns with the alien, who gives a knowing smile. Breedlove inspects the new batch of nude women, still looking for his "perfect specimen".

At about sixty minutes, that's about all the plot this little number can fit in. It's probably just as well, too. There's much to enjoy in this film - apart from the refreshingly non-anorexic women - the character impersonations are fun, the monsters, sets and aesthetic of the film are all worth a look. The "Sex Bombs" go-go number is the highlight of this film for me - it all comes together for a few minutes and made the DVD worth every cent. The DVD I viewed also has the Lee Frost nudie-cutie House on Bare mountain, which I might review one day and was quite a lot of fun as well, and in addition there were heaps of shorts of varying quality, one even featuring those gyrating Sex Bombs again.

Not a great film for the feminists in your house, but compared to the rougher style of exploitation cinema - and a lot of modern mainstream film - it's all pretty innocent. Treat it as an item from a time long gone, and you'll have a fun viewing experience.