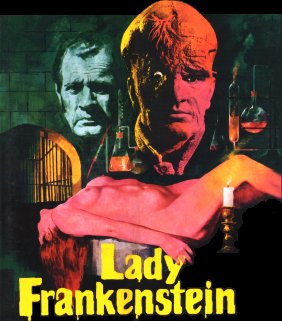 Let's face it. Any film that features extraneous nudity, a bit of blood and thunder and tries to be a Frankenstein story has got to be worth viewing. This Spanish/Italian co-production has all that, but I really believe it's a wonderful little film! Director Mel Welles (the main protagonist Seymour in Corman's Little Shop of Horrors) has fashioned an exploitation film, to be sure, but there's a little bit of emotion and poetry here and there that made this reviewer stop and think, all perspectives maintained, about the human condition.

Baron Frankenstein (Joseph Cotton), along with his assistant Charles (Paul Muller) has created a composite corpse from bits of other cadavers. Frankenstein's daughter Tania (played by the pulchitrudinous Rosalba Neri) is also a respected surgeon, but Frankenstein doesn't want to show her what's he's up to. Just protective in a fatherly way, I guess. As often happens in a Frankenstein film, the damaged brain of a hanged man is used, so when the creature is brought to life by lightning, not only is he thinking-impaired but the lightning hits the creature in the face, leaving a flaming, scarred mess where once was a reasonably normal countenance. I thought this was a good idea - to explain the hideousness of the monster by the force that brought him back to life.

After Frankenstein has sent Charles to fetch Tania to view the culmination of their genius, he faces his monster. It had obeyed some simple orders and seemed placid, but when he moves in to examine it, it crushes him to death in a bear hug! It's creator dead, the monster, as they say in the classics, has left the building. Tania and Charles find their father and mentor dead. After a few seconds of grief, Tania vows to vindicate her father's work and also avenge him in the process. She, with Charles' help, will build another creature to kill the first.

In the meantime, the monster is stumbling around the countryside, happening upon a naked woman and her clothed lover. After chasing away the man he tosses her in a stream. For some reason she seems to be dead, even though he doesn't really do that much other than pick her up. The attacks get more ferocious, and soon Inspector Harris (Mickey Hargitay, a veteran of countless films that your old Uncle Boris loves), is working out that the monster is killing those that had anything to do with making him.

Charles reveals his love for Tania, and though reluctant, goes along with her plan. To allow him to make love to her, he must have his brain transplanted into the simpleton servant of the Frankenstein's, who happens to be (apparently) good looking. He will then gain super-strength from the lightning and kill the monster and win the girl! Lucky guy!

After Tania seduces the poor servant while Charles kills him with a pillow - wherein we're treated to a double-nude-sex-murder-scene - all goes to plan, with Charles recovering in his new body and testing his new-found strength. When the monster shows up, hunting his remaining creators, we soon learn that Tania's love for Charles may not be all it's meant to be. Who will survive the consequences of betrayal? Not the monster, who ends up minus an arm, a knife in the back and an axe in the head. Nice and gory, my little friends! And, we get another sex scene, as flames consume the Frankenstein castle.

This film, from this description, obviously has a bit of everything, but I couldn't help but feel sorry for poor old Charles, goaded into murder by his love for a seemingly heartless woman. All the actors seem to be trying hard to elevate the script, and I feel they succeed. The performances are top notch. Of course, judge for yourself. I also viewed the camerawork and sets as particularly effective. It's all pretty much in the vein of Frankenstein's Castle of Freaks but really, a far superior filmic experience.

Write in and let me know what you think!