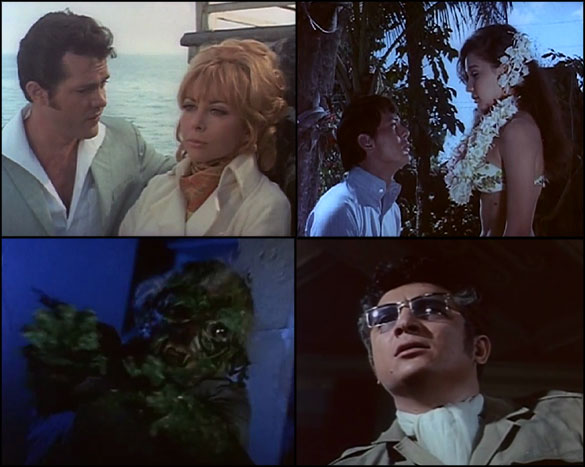 I've always enjoyed a good Filipino horror / science fiction / action film. Mad Doctor of Blood Island fits the bill in almost every respect. You've got smatterings of gore, nudity, violence and action for your viewing pleasure, and the directors make sure they leave it all on the table. Co-director with Gerardo de Leon, Eddie Romero has a respectable body of work in all manner of genres, and he's also appeared in these pages before. Brides of Blood is a personal favorite of mine, and he's also produced titles such as Black Mama, White Mama and Beast of the Yellow Night. All worthy viewing experiences for lovers of oddball films. Mad Doctor is actually a sequel of sorts to Brides of Blood, taking place on the same island (I think) and is followed by a direct sequel which I haven't seen yet, Beast of Blood. You start to get the impression that ‘Blood' and ‘Beast' are words that Romero likes to use in his titles!

We open our film in classic sleazy-horror fashion. A naked Filipino woman is chased through the forest by a gnarled, green mutant monster. He eventually catches her, and slashes her into a bloody mess. After this, the plot unravels in quite a compelling and gradual way, which I appreciated. Not until the last section of the film, could I predict exactly what was going to happen. Pathologist Bill Foster (John Asher from the Brides of Blood) travels to Blood Island with Sheila Willard (Star Trek's Angelique Pettyjohn) and Carlos Lopez (Ronaldo Valdez). Bill's exploring stories of green-blooded people roaming the island, Sheila's looking for her estranged father (Tony Edmunds) who's become a self-pitying drunk in exile. Carlos is seeking his widowed mother (Tita Munoz) who is still on the supposedly ‘cursed' island, wanting to take her to a better life on the mainland. Arriving in the tropical land, all three are taken to meet the leaders of the local community and the gruff, disinterested Dr. Lorca (Ronald Remy) who walks with a cane. Willard shows up, but is too full of self-pity to welcome his daughter in any real way. Also appearing is Marla (Alicia Alonzo) a childhood friend of Carlos who seems attracted to him, but distracted. Mrs. Lopez also seems distant and reluctant to leave the island for some reason.

Carlos tries to convince his mother to leave, but she hedges around the subject. After rebuffing Sheila's offers of making breakfast, Willard leaves and goes on to spy on Marla skinny-dipping in a stream. Meanwhile, gruesome murders are taking place on the island. Meeting in secret, a native couple are torn to pieces by the enraged creature. Bill, Sheila and Carlos try to ease into their stay by having dinner with Mrs. Lopez, Marla and Dr. Lorca. They are later invited to a fertility ceremony in the jungl,e where various native couples cavort passionately to drive away the evil they believe is infecting their land. Unfortunately, this scene ends suddenly with the real killing of some pigs and goats as a sacrifice, which I did not enjoy and took me out of the film. More on this aspect later. Marla seduces Carlos that night, but after the young man offers a relationship with her, she rejects him and leaves. Some time later, a strange, partially mutated green-skinned man appears out of the jungle, moaning and confused. Bill wants to run tests but Lorca sedates the green man, whom he says has “chlorophyll poisoning”. Bill doesn't seem convinced, and with Carlo's permission, orders his father's body exhumed. Marla protests, to no avail, and the coffin is revealed as empty. Lorca's mute assistant sneaks into where the green man is being kept and beheads him with a machete. Charming!

Gradually the screw of the plot turns tighter, and we begin to see exactly what's been going on. Years ago, Carlos's father showed signs of leukemia. Desperate to live, he and his wife turned to the young Dr. Lorca, who could not resist trying his new chlorophyll treatment, something he discovered using extracts from a native plant. At first the man recovered, and even became younger and filled with vitality. He fell in love with a native maiden, Marla, and they had a secret affair. Soon however, the change to monster began and he lost his mind, quickly becoming a murderous chlorophyll creature ravaging the countryside. Back in the present, the creature enters what was once his house and viciously kills his wife. This is quite a gruesome scene, with splatter and entrails aplenty. On spotting a picture of Carlos as a youngster, the thing spares his adult son who was trying to stop him, and shambles away. Lorca shows up and explains his father's mutated condition, then kidnaps the dazed man. Marla catches up to the monster in the jungle and confronts him. The rasping, befuddled thing finds he cannot kill his former lover and at her bidding, follows her back to Lorca's hidden laboratory.

Bill manages to track Carlos back to the hidden den of scientific evil and finds him imprisoned there, along with other villagers, victims of Lorca's insane experiments. Lorca and his assistant arrive and after a pitched fight, Bill appears to be on the verge of defeat. The monster and Marla show up and seeking revenge, attack Lorca. Marla sets fire to the place and the flames quickly spread. Bill and Carlos, along with the imprisoned villagers, flee the inferno, The laboratory explodes, presumably destroying the creature and killing Lorca, his assistant and Marla. Bill, Sheila, her father and Carlos leave the island by boat, little knowing a hand, bleeding green blood has emerged from under a canvas.

Clearly, I've described a very B-grade plot to you. The execution, however, of Mad Doctor of Blood Island is something of a surprise, and quite different. It's a literate script written by Reuben Canoy, something you'd not expect in a low budget Filipino horror film. Characters describe each other as ghosts and constantly consider the emptiness of their lives. The way the story unfolds has the effect of a steadily tightening trap, which the Lopez family and Marla cannot escape. I certainly wasn't expecting anything highbrow when I pressed play on this little film, and yet came away feeling I'd experienced a real story, reasonably well told. The camerawork by Justo Paulino is serviceable, but one visual effect understandably divides viewers - whenever the monster is on-screen, the camera ‘throbs' and zooms in and out quickly, over and over. It's a very odd approach, and I kind of ‘get' the effect of trying to show the palpitating fear caused when the monster's around. I can also see how it becomes very annoying to some people, and quite headache-inducing!

Performance-wise, nobody is a complete standout from the other. Perhaps this is one of my two issues with the film. With little emotion on display, the cast mainly go through the motions, with no-one chewing the scenery in any particular way. I wished Ronald Remy as Lorca had been more of a moustache-twirling, cackling villain, but he's almost reasonable in his insanity. Some of the dialogue from Alicia Alonzo as Marla was a little hard to follow due to her thick accent, but it's not a major quibble. Makeup effects are fine, with ‘The Chlorophyll Man' being quite a detailed, encrusted creation of dripping green horror, complete with a single, blinking human eye. There's also a lot of scattered entrails and dismembered limbs, for those gore enthusiasts out there. Moments of nudity lurk here and there, to keep the voyeur factor alive. Angelique Pettyjohn has a brief campfire sex scene with John Asher, but it doesn't get too frenzied. So the exploitation elements are all in there, alive and kicking. Something that's not alive are the poor pigs and goats that are slaughtered during the ‘tribal' ritual. I'm aware it's cinema of a bygone era, and made in the Philippines to boot. Animal life was probably worth less than nothing, in that context. Still, it took me out of the film and out of the enjoyment. Couldn't they have just shown the natives rushing up to them with knives, and the spectators reacting in horror?

I hope Beast of Blood doesn't bother with the animal cruelty, as Brides of Blood certainly didn't, and is a much more enjoyable piece of trash cinema because of it. To finish up, if you can get past the robotic acting and real animal deaths, you may find quite a few things to enjoy about Mad Doctor of Blood Island. I enjoyed it as nifty little mashup of horror, gore, Frankenstein-like science-fiction, a hint of erotica and jungle action, Filipino-style. Plus, it's the only film where you can see a man mutated by that deadliest of substances, chlorophyll, into a marauding monster. One could almost develop a fear of plants from watching this film. Almost.