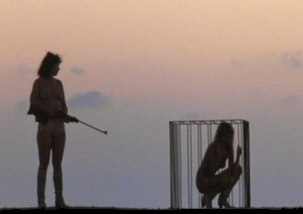 Any film made by Spanish cinematic legend Jesus Franco is worth viewing by horror-sleaze enthusiasts. This bizarre film is no exception. You'd better be sitting down for this one when you watch, because there's the odd moment where you won't believe your eyes. I'm hoping to review more titles soon like "Vampiros Lesbos" and "She killed in ecstacy", but this one's a suitable start.

We see a just-married couple drive past a sign in the desert, "something-or-other, detention centre for women, keep out" or the equivalent of. It looks like Spain or somewhere similar. No sooner do they disregard the sign, than they are caught by topless female prison guards and dragged back to the warden, the black transexual Ajita Wilson, a Franco regular on a few films. There's also an impotent Governor and his wife. The Governor is played by one of the most wimp-like actors I've ever seen. His fake moustache would embarrass the pool cleaner, in a grade-z porn flick. The more female prisoners we see, the more we realise that they're ALL topless. And that's just the start.

The woman is thrown in jail for trespassing and the man is exiled from the prison, spending most of the rest of the film trying to get back in. From there on, we're treated to scenes of naked women in cages, naked women trying to escape from plastic crocodiles and being eaten, naked women being raped by a German Shepherd (don't worry, animal lovers - it's a very fake scene), naked women fighting each other with knives and spears, after being let out of cages, naked women being whipped by the sadistic warden, naked women hanging in chains being generally molested, and naked women dying from mysterious viruses in disease-ridden whorehouses. Do you get the impression there's a lot naked women in this film? This is one of a tiny number of cinematic works that, though fun, manages to make nudity a bit dull after a while. Sounds impossible, right? You might see what I mean.

After a while, one of the feisty prisoners (the one who got forcibly friendly with the German Shepherd) joins up with the kidnapped woman, who has been reunited with her husband. As with most "Women in Prison" movies, there's a riot at the end which may end some lives, and upset the order of the infernal Hellhole. Who will survive, and who will have to duke it out with the plastic crocodile?

I've only seen an umpteenth generation dub of this opus, but you can tell that even in a pristine version, we're talking no-budget here. I guess it doesn't matter when you've got massive levels of nudity and sleaze. The costume budget was nil here, I can tell you! Jesus Franco puts in his customary appearance as a effeminate, gay pimp having horizontal fun with a black man. Franco often portrays himself as a deviant in his films, or at the very least a fool or a victim to whatever mayhem's going on. Chalk it up to being a good sport.

Do I recommend "Sadomania" to the masses? Only if you've got a taste for Jess Franco's cheap style and Women-in-prison movies. This one follows the WIP formula pretty much to a tee. The absence of any production values forces Franco to up the nudity factor, which in the end becomes almost surreal. If you're easily offended - and I might have been if the "dog-rape" scene was for real, which it so obviously wasn't - give it a miss. If not, sit back and marvel at film making at it's cheapest and, meant in the nicest possible way, nastiest.