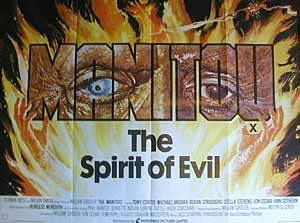 This little Exorcist rip-off is a small gem. I'm always a sucker for these sub-genre of films, and this one was directed by William Girdler of Abby fame (yet another Exorcist knock-off - but a blaxploitation one!), the variation is that this time the evil forces of American Indian magic rear their black-feathered heads. Let's get to that later, though. Veteran actor Tony Curtis is the main protagonist is this one, quite a surprise as I don't usually associate him with genre vehicles.

Plotwise, it's odd but simple. In 1977 San Francisco, Karen Tandy (Susan Strasberg) has developed a large, rapidly growing tumor on the back of her neck. Boyfriend Harry Erskine (Curtis), who is a phony mystic, is concerned but hopeful that the medical profession will sort it all out. No such luck. It turns out that the tumor contains a foetus, whose force of will does not allow any operation of removal to take place - it drives any surgeon to cutting himself with the scalpel.

As Karen becomes more and more possessed, speaking in weird languages, Harry and his other mystic friends - one of them Stella Stevens - hold a seance, and identify that an evil Indian spirit is involved. A cameo by Burgess Meredith as an Anthropologist, confirms that an Indian Manitou or spirit of an ancient Witch-Doctor, desiring to be reincarnated and reborn, is the culprit. Desperate, Harry contacts a modern-day Indian Witch Doctor, John Singing Rock, played by Michael Ansara. Finally and reluctantly, John agrees to help.

It is too late to stop the fairly fake-looking "birth", and Misquamacas, evidently the most powerful of all Witch-Doctors is born again. Played by two dwarves, Misquamacas is born twisted and deformed, due to being bombarded by X-rays when Karen was originally being diagnosed. John tries to use a magic circle to contain him - all to no avail. Hospital staff die gruesomely, and are even reanimated zombie-style at one point. Misquamacas, in his desire for destruction and revenge, calls up Indian demons (actors in lizard-suits) and even freezes the hospital in ice.

Finally, John and Harry decide that, because everything has a Manitou, even non-living objects like rocks and chairs, they can call on the manitous of the hospital's computers and direct their energies against Misquamacas. In a strange, star-speckled astral plane they do battle, but it all seems hopeless. It's white man's magic and seems to have no effect on the demonic creature. That is, until Karen revives from her hospital bed and topless for some reason, focuses the energies at Misquamacas. Will the forces of western civilization prevail?

Yes, it all seems a bit racist, but there's no denying The Manitou is enormous fun. The acting from all concerned borders on parody but it seems to suit the already rip-off material. You have to laugh as the "evil" Indian Magicks are defeated by the always-good Whitey. Whoops, just gave away the ending! No matter, I'm sure you'll enjoy the film nonetheless. It doesn't have the levels of blood and vomit that most possession movies have, but it does have a certain naive charm. Tony Curtis lends something to the movie, maybe just his general affability. I kind of like the scene when he turns off his "spooky" mystic music and relaxes with some seventies blaxploitation-style tunes. The man has taste!

Sit back, relax, throw on your kaftan and get possessed by the Manitou. You'll have fun and learn everything you need to know about Indian culture! Sorry, my computer's Manitou is forcing me to type this...