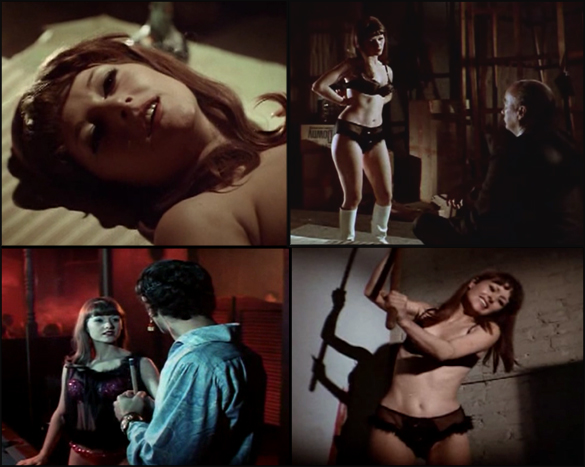 With titles to his name such as Street of a Thousand Pleasures and The Agony of Love, you'd probably expect any output from director William Rostler to have a fairly high sleaze quotient. Well, Mantis in Lace doesn't dissapoint in that area, but it's also a surprisingly well-made little film that actually has a few memorable moments while adhering to it's sleazeball aesthetic. The presence of Stuart Lancaster from such classics as Russ Meyer's Good Morning and Goodbye adds class to the proceedings, making the adventures of killer-stripper Lila quite an enjoyable view. 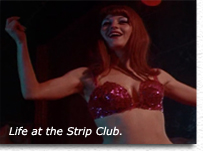 After the catchy, Nancy-Sinatra-sounding opening 'Lila' theme song runs through the credits, We meet pretty redhead stripper Lila (Susan Stewart) dancing in some smoky joint. After a skuzzball hippy-type makes a pass at her, she seems to like him and he buys her a drink. After some small talk over a game of pool, the two decide to take their 'connection' elsewhere. The guy's surprised when Lila wants to take her car and not his, to a deserted warehouse. Still, he goes along with it. They end up in the dusty, dark old place where Lila lights some candles and gets the drinks ready. She insists on doing one of her strip-dances for him, but strangely we only see her nude in silhouette. He agrees to this and eventually they get to the clinch. Lila puts a record on, and it's that Lila theme song again. After a sex scene - what seems an eternity of watching hands clutching bare backs - the guy offers Lila some LSD. After a few minutes she begins to moan 'oh wow', but soon enough has a very bad trip. Lights and evil faces swirl around and Lila hallucinates she's being squashed with bananas and cantaloupes! She'd already told the punk how much she hates bananas, as they LSD slowly took effect. Of course, the reason for our film is sex and mayhem, and now we're up to the mayhem part. Freaking out at the psychodelic onslaught, Lila grabs a screwdriver and attacks her lover. Mortally injuring him, she picks up a meatcleaver from a handy chunk of a wood, and hacks him to bits. 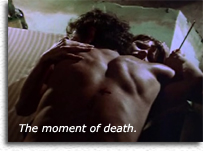 Lila then picks up another man at the club, older psychiatrist Frank (Stuart Lancaster). Frank seems to be aware there's something not quire right with Lila, but goes off with her anyway. Back at the murderess's warehouse - where she always goes because there she can be 'free' - Lila puts her record on again and does a slow strip, as thunder begins to surge in the background. It's quite an atmospheric scene. This time, Lila offers the LSD but Frank says no. After enduring a psychotically bad trip that propelled her to hack someone to pieces earlier, Lila takes that evil drug again, strangely enough. Soon, the bad hallucinations start again and poor old Frank is fairly quickly dispatched by screwdriver and meat-cleaver. Lila, in her drug haze, laughs hysterically and says how 'funny' the dismembered man looks.

The crazed woman has taken to disposing of the corpse-pieces by shoving them in a cardboard box, and leaving them for all the world to see. Of course, this sets the police on her trail and two bumbling cops trying to solve the crime. In the meantime, Lila takes a new guy, or is that victim, to her 'pad'. It's a more aggressive fellow this time around, and when Lila wants to start her games, the guy gets drunk and nasty. Still, in her LSD-induced state Lila gets the better of him with a garden hoe this time! Another box of body parts is found. The tide is beginning to turn, though. A real-estate agent takes a prospective buyer to the warehouse, and finds the cleaver and blood all over the floor. Promptly calling the fuzz, they decide to stake out the place. Soon enough, Lila turns up with another potential victim, who produces a handgun himself. Apparently he runs a liquor store and needs it for protection. As the two cops lie in wait, Lila begins to go through her strip-take-drugs-and-kill routine. As they realise what's going to happen, they spring into action. But the man, having been deprived of some Lila action, pulls his gun on them! A shootout ensues and one of our cast members will end up dead. Is Lila, our Mantis in Lace, about to meet her own end? 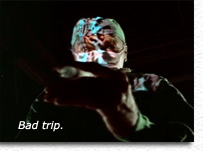 Mantis in Lace probably isn't really enough of anything to become a beloved exploitation gem to devotees of this type of film. There's a little blood and some nudity throughout, with a few strip-acts from other voluptous women for good measure. Still, nothing to rival the nakedness quotient of Street of a Thousand Pleasures. Having said that, this film is far superior in virtually every respect. I'm not sure what happened to Rostler's directorial skills over the years but what artistry is shown here, is all but lost in Pleasures. Mantis seems to enjoy exploring the seedy, smoke-filled underworld of strip clubs of the sixties. Strangely enough, while we often see the slender Lila dancing topless in the club, we never see her naked at all in the warehouse sex scenes. What gives? One question I had was about Lila's killing spree itself. When she first attacks the hippy-punk after the initial LSD trip, she grabs a handy meatcleaver just waiting to finish the job. Was she planning to kill any potential lover all along, even before the acid trip? Perhaps, I read in too much. 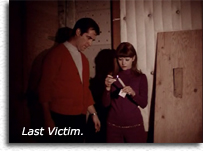 Technically Mantis in Lace is perfectly adequate and reasonably well-made. The 'Lila' theme may lock itself inside your brain for days, as it did mine. Leslie Kovacks' photography is quite nice, especially in the warehouse murder scenes. Lila's fruit-vegetable-twisted-faces LSD trips are depicted quite effectively, and may even approximate real drug experiences, I wouldn't know! I also loved the ominous, thunder-punctuated lead-up to Frank's death. Stuart Lancaster's presence is a plus for any film and he's no exception here, bringing an intelligence to the film that's sadly cut short. I would have liked his character to have an ongoing role, but that's a bit much to expect from this type of flick. Susan Stewart as Lila is perfectly pleasant-looking but she's got an odd way of delivering lines, almost a thick European accent at times. I guess it sort of adds to her 'otherwordliness'. Not a huge complaint, more of an observation.

So, if you're looking for a nice, humble sleaze-film that relishes it's vintage strip-club environs, go no further than Mantis in Lace. It doesn't drench the screen with gore or even that much sex, but there's something quite effective about the whole demented little endeavour.