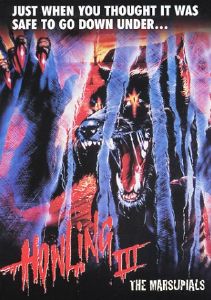 What a delicious little trash confection this lycanthropic spoof is. Director Phillipe Mora, who also helmed schlock-horror classics like Howling II : Stirba, the Werewolf Bitch and The Beast Within, amongst others, has come home to his Australian roots to direct this third sequel in the howling series. It truly is a film like no other, one of the most bizarre horror sequels ever, and you probably need to be an Australian to fully grasp the silliness of it all. This is often due to the self-conscious cameos that permeate the film.

Professor Harry Beckenmeyer, (Aussie actor Barry Otto, well known to us Antipodeans) reknowned sociologist and werewolf expert, believes there's a race of Marsupial - hence the title - werewolves living in Australia. The president (Expatriate actor Michael Pate) gives him an assignment to go down under and track down these monsters. In the meantime, young marsupial werewolf Jerboa (the ludicrously beautiful Imogen Annesley) leaves her tribe of Mad-Max rejects in the Aussie outback to come to the city - Sydney. This is because her bald-headed stepfather, the leader of the tribe, had tried to rape her.

Before long, the naive Jerboa is working on a film-set - "The thing from Uranus" or something - and falling in love with the makeup artist, Donny. Film Icon Frank Thring is the director, hamming it up as usual. We glimpse the film in progess with one of the worst "bladder" transformations in history, but at least it's intentionally bad here. You know what I mean when I say bladder - when a character's head distorts and stretches under the swelling of the balloons of the fake head as he/she transforms into a werewolf, alien, etc. Anyway, soon enough three of Jerboa's tribe, dressed as nuns, are in pursuit and force the pregnant Jerboa and Donny to flee.

Jerboa is captured by Professor Harry, and examined, but escapes into the outback and eventually gives birth to a joey in a "touching" scene - yes, a little half-human werewolf-kangaroo baby. We can't be talking a serious movie here. Donny and Jerboa are reunited and Professor Harry falls in love with a Russian werewolf ballerina - a non-marsupial "true" werewolf who, initially drawn to the brutish leader of Jerboa's tribe - eventually falls in love with him in return. In the meantime, the army is in pursuit of the marsupials and wants to wipe them out. The killings by Jerboa's nun-like pursuers have returned to haunt them. However, to save the remnants of his tribe, the leader, Thylo (Max Fairchild) communes with the werewolf spirit of the outback to become "The big one", a giant werewolf head we only briefly see before he's blown up. Still, the army is off the trail and Jerboa and Donny are able to raise their son, in conjunction with Harry and the ballerina-werewolf Olga, who raise a daughter of their own in the now-peaceful outback.

Soon, though, the bright city lights beckon our heroes. Will the city force them to reveal their lycanthropic selves again, and with what consequences? Only Dame Edna Everage will know...

If this all sounds convoluted and ridiculous, it is. It's a send-up, pure and simple. Some of the cast are taking it seriously, but the cameos, like campy Australian film-critic Bill Collins as a surgeon, famous man-dressed-as-woman act Dame Edna Everage as an Oscar presenter right at the end, and Frank Thring in all his black-clad glory as the film-director ensure an atmosphere of the absurd. The makeup, transformations and werewolves are little more than adequate - the film-within-a-film transformation aside - and there's so little blood that most gorehounds will be bitterly let down. I can't imagine how this film was received by the international audience - surely it bombed? The bizarre plot-line has to be seen to be believed - in my plot summary I could barely cover all the little diversions and minor characters that pop up to entertain (or not, depending on your taste...). If you're in the mood for full-on gore, hairy antics and writhing werewolf sexuality, give this one a miss - it's all lightweight stuff compared to Mora's previous entry Stirba, Werewolf Bitch, which is great fun in its own right. The Marsupials, though, can only be considered a quirky, light horror-comedy.

The best way to watch this one is to be Australian, I'm afraid. Or maybe to read this review first and be warned! If you're in the right mood, matey, you'll have a howling good time, down under. Well, it beats Kangaroo Jack any day.