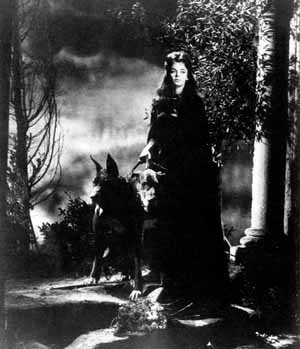 I know this must have been said dozens of times before, but this would have to be one of the most gorgeous looking horror movies, or any film for that matter, ever made. I'm going to come back to this statement, in full, a bit later on. This and "Blood and Black lace" would have to be my favorite Mario Bava films, just for sheer beauty. Let's tell you something about the film.

In medieval Russia, the evil witch Asa (horror icon Barbara Steel) and her accomplice-lover Prince Javutich are put to death hideously, by black-robed monks and the Grand Inquisitor (Asa's brother), for their Satanic transgressions. A gargoyle-like mask is nailed to their faces, which kills them. This scene is amazingly brutal for 1960, with blood spraying from the nailed head of Asa, after she had already been branded with the mark of Satan. Of course, before this happens, she issues a curse to live again through the bodies of the descendants of her brother. And to revenge herself for her death, for that matter. The monks attempt to burn the witches but a strange rain comes down and extinguishes the fire. Javutitch is buried in an unmarked grave and Asa in the family crypt, instead, a cross placed on her coffin which is visible through a window in the lid, forcing her to stay dead.

Centuries later, two doctors come across the grave and accidentally revive Asa. How does this happen? The older Doctor defends himself against a huge, attacking bat, cutting himself and breaking the crucifix. After removing the "mask of Satan" from Asa's face, he drips blood into her empty eye-sockets - which had previously spewed forth spiders and scorpions. Pretty icky for 1960, really. As Asa reforms herself in the coffin, The two Doctors meet Princess Katia, descendant of Asa and a dead ringer, too. Only this one's "good". Her entrance is the picture at the top of this review - sheer gothic beauty.

Katia, her brother and father are descendants of Asa's brother. Her father is having nightmarish visions of the return of Asa to destroy them all. In the meantime, the older doctor is compelled to return to Asa's tomb where he finds the semi-alive corpse. Soon Asa has sucked the life out of him and left him a sort of zombie-vampire. In the meantime, Asa has called back Prince Javutich from the grave in a fantastic dead-returning-to-life sequence. He then proceeds to kill Katia's father.

The younger doctor teams up with a priest to get to the bottom of things, revealing a Maelstrom of horror returning to the surface. Katia begs for help as her brother is killed by Javutich, and they manage to dispatch the older doctor - with a stake in the eye! - and Javutitch as well. As Katia is now in the thrall of her evil ancestor Asa, one will have to die so that the other can live.

As mentioned earlier, this would have to be one of the most gorgeous horror movies ever. It's gothic heaven, no doubt about it. The beautiful deep-focus photography reveals details in every inch of the screen, and the use of fog and sets enhances it. Some of the scenes are amazingly gruesome and violent for 1960, such as the nailing of the mask onto Asa's face, the branding, various gore-filled wounds, Asa's hole-filled dead-alive face, with empty eye-sockets filling with unclassified goo. We also see her rotting-skeleton body underneath the robes, and her final fate as the hate-filled villagers attack will probably hurt in the morning!

The acting is reasonable for this type of production, with Barbara Steel particularly holding her own with two roles - and they do seem like different people. I would definitely recommend this work of art to those interested in a classic in the history of horror. It's "old", doesn't have nudity or people being chainsawed in half, but try not to be compelled by the sheer gothic misery and atmosphere. Mario Bava was working at his peak, here and the results are completely memorable.