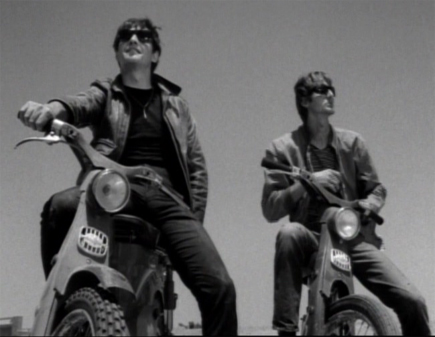 Another wonderful little epic from Russ Meyer, this one hails from the era of Faster Pussycat! Kill! Kill! Actually it was made the exact same year, and again showcases the worthy presence of Haji, who not only looks raven-haired stunning but brings a fiery European quality to any film I've witnessed her in. And again like Faster, we have some gorgeous black-and-white photography, desert settings and both good and bad characters that in their various vehicles constantly move, Daddy-o. Are you hip?

We first meet the voluptuous - what else in a Meyer flick - young wife of middle-aged Frank (Steve Masters). She (Arshalouis Aivazian) is lounging around in a bikini trying to distract the harrassed Frank from his fishing. Suddenly three bike-punks show up and make trouble with her while Frank is off somewhere else. The bikers, leader Brahmin (Steve Oliver), the radio-stuck-to-his-head Slick (Thomas Scott) and obsequious Rufus (F. Rufus Owens) would perhaps better be called "mopedders" because that's all they ride, but let's leave that aside for now. The punks torment the woman some more and Frank shows up, incensed. After holding his own for a few minutes, the punks soon get the better of him, and leave him unconscious. They then have their way with the sobbing woman.

Later on, they circle 'round on their, ahem, bikes, Gail Maddox (buxom Holle K. Winters), the wife of local Veterinarian Cory Maddox (Alex Rocco). Cory turns up in his jeep and punches some of the bikers out. They then take off on their bikes and Cory and Gail return home. Cory's a dedicated vet and frustrates Gail with his constant attention to animals and particularly the horses of buxotic blonde Jessica Fannin (Sharon Lee). The next day, Jessica tries to seduce Cory with her best Mae West impersonation but all she can muster is a kiss from the faithful husband. As the attempted seduction takes place though, we see that the hoodlums have tracked Cory and Gail to their home, and are in the process of tormenting, brutalizing and raping Gail.

Cory comes home to find the sheriff (Meyer in a cameo) and doctor loading Gail into an ambulance. The doctor, at least has compassion and is horrified at Gail's raped-caused injuries. The sheriff barely cares a whit and basically says what happened, a woman is 'built for'. Cory turns up and distraught, takes his beloved to hospital. He swears vengeance on the punks. Later we see the old curmudgeon Harry Bonner driving his Cajun wife Ruby (Haji) in their old truck, supposedly to Los Angeles. It's a combative relationship to say the least, with Ruby often spitting on the old bastard, who doesn't seem to respect her one bit. They have a flat tire and while Ruby storms off as Harry half-heartedly tries to fix it, and no sooner does he start than the three bikers show up. Harry offends Brahmin and they punch him up. The old coward offers them Ruby but one of the hoodlums finds his rifle. After a scuffle, Harry's shot dead and Ruby tries to flee. A crack shot, Brahmin takes aim and blows Ruby away. Now a double murder scene, Brahmin shoots all the bikes and the three punks take off in their victim's truck.

The vengeful Cory arrives at the scene. Harry's dead all right, but Ruby's still alive. The bullet only grazed her head and Cory offers her a ride out of the desert. She wants to go to L.A. but Cory only offers a lift to the nearest town - vengeance is paramount. In the meantime the gang is beginning to deteriorate. Slick wants to leave, and Brahmin says go ahead. Surprised, Slick turns to leave and is promptly shot in the back by the gradually-going-insane Vietnam Vet. He falls dead. Rufus promises to stay with him.

At their camp, Cory and the fiery Ruby make a sort of peace. Ruby tells him her sorry life story and Cory tells her to go easy on herself. Suddenly a rattlesnake bites Cory on the leg and he screams for Ruby to cut his leg, holds her head to it and yells her to "suck on it!" This scene, I have to admit, is pretty funny, folks. Over a night of fever, Ruby comforts Cory and at the same time, kills the conniving Rufus who was trying to steal their truck and kill Ruby to keep her silent. The next day, Cory has recovered and comforts the woman who had to kill to save them both. Driving further, they're ambushed by Brahmin, who shoots Ruby in the shoulder with his rifle and now completely believes he's back in Vietnam fighting "Commies'. Cory and the badly wounded Ruby fall into a ditch and take refuge from the deluded madman ... but how long can they survive the hail of bullets he unleashes?

If you need nudity and overt sex from your Meyer films, probably give this one a miss. There's the usual cantilevered vixens but thy're pretty much covered up all through. What you do have, though, is that Meyer sixties dialogue, for instance, "don't wig out man, I'm hip... " by one of the hapless hoodlums, stunning music which veers from lounge jazz to sixties guitar rock, violence and emotion aplenty, and great chiaroscuro photography from Meyer. The plotline is almost elemental as written by Meyer and his team of James Griffith, Hal Hopper and W.E. Sprague. We're talking pure rape and revenge, with even nature and the elements playing their part. The desert in Meyer's films often seems to be a character as well. The acting by Alex Rocco, Haji and the cycle-punks is all bombast and histrionics, practically making this little film a towering drama of lust, violence and revenge. Rocco is pretty one-note once Gail's been raped, just anger and desperation. Still, he's effective for what the film requires. Haji plays fiery Cajun vixen - with a heart - just perfectly. I wish she'd made more films! The cyclists have very little redeeming qualities, except for maybe Slick, who rings his mum long-distance on the Maddox's phone to let her know he's okay while they torment Gail! Coleman Francis as the cowardly husband Harry is pure white trash, played to ignorant, sweaty perfection.

Motor Psycho, in a way, is a great companion film to Faster Pussycat! Kill! Kill! with Haji and the desert making some fine links. If you get a lot out of Faster, see if you can get your hands, and your eyes, on this one. While it doesn't quite have the presence of the awesome Tura Satana, it has a lot going for it in a stripped down, go-for-broke kind of way.