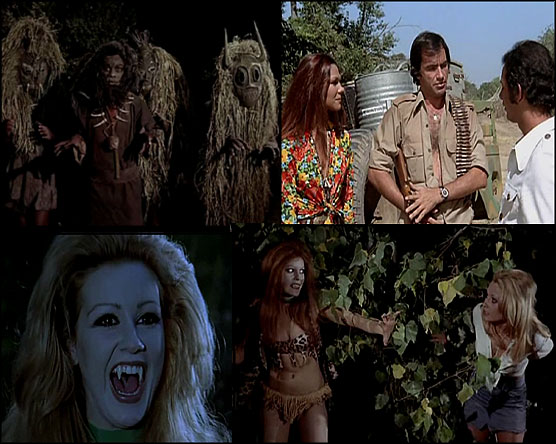 For fans of seventies exploitation cinema, it’s hard to beat the combination of leopard-skin bikinis, fangs, jungle drums, voodoo and blood that Spanish director Amando De Ossorio offers up in his 1974 effort, La Noche de los Brujos also known as The Night of the Sorcerers. It’s a lurid, colourful work that is perhaps not as well-known as the blind-zombie classic Tombs of the Blind Dead, but still worth tracking down and viewing. Made in the middle of production of the Blind Dead series, you can see some stylistic similarities with the vampire-women moving in slow-motion through the jungle, much like the undead Knights Templar are filmed riding their horses. De Ossorio also clearly has a thing for the walking dead as a number of shuffling African ghouls also make an appearance. Obviously made on a low budget, De Ossorio still gets production value out of his misty jungle sequences and it’s a surprisingly handsome-looking film.

During a pre-title credits scene, a voodoo ceremony in an African jungle is completed by a female missionary (played by Barbara King) having her clothes being whipped off by a native witch-doctor and decapitated by a native woman. Of course, this voodoo ceremony is preceded by much topless dancing and drums by the numerous participants. The voodoo-ists are attacked by a group of pith-helmeted white men who shoot them all dead, but somehow the woman’s decapitated head is still alive and now bears a pair of fangs, screaming at the invaders! Now, this is not a good start for an audience with today’s sensitivities … with a helpless woman being flogged into a state of blood-streaked nudity and decapitated. You’ve got stereotypical Africans preying on the helpless with their evil voodoo, only to be all shot dead by the heroic white colonists. Still, this was made in 1974, so I guess we can look back and extract a measure of entertainment without living out these values in our daily lives.

Now we jump to the present – of 1974 – and a Professor Jonathan Grant (played by Jack Taylor) has brought an expedition to Africa consisting of game hunter Rod Carter (Simon Andreau), his ‘mulatto’ lover Tunika (Kali Hansa), the funding partner’s lazy, snobbish blonde daughter Elisabeth (Maria Koster) who looks down on Tunika and Carol (Loli Tovar). The professor’s scientific study is to explore why elephants have disappeared from a certain river area in West Africa. Setting up camp, they’re greeted by a stranger named Tomunga (Joseph Thelman) who warns them about the area’s history, especially the evil voodoo cult that still haunts the area after dark, where evil leopard-spirits exist in the daytime as big cats, and at night as human, vampiric women. Tumika seems rattled by Tomunga’s warnings but the rest of the group want to stick around. Carol takes the opportunity to take some photos of the voodoo site that they’ve inadvertently set up camp near. She also takes some inappropriate shots of Rod and Tunika making love near the river – as of course this type of film needs a soft-core sex scene. As night falls, the spirits of the voodoo dead start to rise from their graves … rocks begin to fall from a burial-mound as a long-dead hand pushes through them, mist begins to form along the ground. Carol is transfixed by the gruesome scene and is captured by the masked zombies and the vampiric form of the reanimated missionary from a century ago, her head reattached to her body by a red neck-band, now sporting a leopard-skin bikini, a cape and fangs. It’s her turn to wield the magic whip and Carol is flogged as the missionary was, then beheaded.

After a while the campers begin to wonder where Carol’s gotten to. Searching for their missing colleague, they find only her camera. That night the two women, now two undead vampire-creatures, creep into the camp in atmospheric slow-motion. The missionary kills the professor who had been developing the pictures from the camera, drowning him in his own developing fluid! Carol enters Elisabeth’s tent and convinces a groggy Elisabeth, who had taken sleeping pills, to go back to the ceremonial voodoo site with her. Coming to her senses too late, she’s set upon by the missionary and Carol and converted to the fold, seemingly by being just bitten by the two women, and not beheaded this time.

Back at camp, Tunika discovers an undead professor gradually rising and leaving his tent – she traps him inside and destroys him by burning the tent to ashes. So how are these creatures made now – just by being killed by another one of them? It does get a bit confusing. She then fends off a frenzied Tomunga’s unwanted attentions, and kills him with a knife. Rod and Tunika then head into the sacrificial area just as night falls, and the creatures return. Rod opens fire on them, and Tunika is captured by the Leopard women. They tie her to the altar and scratch and bite her in preparation for the turning … just as Rod attacks anew. He rips the neck band from the missionary vampire, her wound bleeds profusely and she appears to finally die for good. In desperation, he throws his gun-belt into the fire and the bullets fly, taking many of the shambling undead including leopard-vampire-women Carol and Elisabeth. I guess plain old bullets kill these supernatural creatures. Rod retrieves Tunika from the altar and drives her away in a jeep, heading back to civilisation and medical attention. However, does she need and want help after her experiences with the vampire women?

Night of the Sorcerers has its narrative flaws but it’s an entertaining ride – or is that a hack-through-with-a-machete - through the drum-throbbing jungles, Spanish-horror style. The leopard-women are kind of iconic in their spotted bikinis and capes, with the missionary vampire as played by Barbara King particularly relishing her new-found villainy with wild eyes and an evil smile. In general, they’re fairly creepy with their slow-motion movements and whispering voices. The slender Kali Hansa as Tunika is also a standout with her sensuous scenes with Simon Andreau. Described as a “dirty brunette” that Elisabeth looks down on, she’s adept at playing determined, passionate and jealous throughout the film, and sticks out from the rather bland characters she plays against. She swiftly despatches her would-be rapist with a knife in the back, and threatens Elisabeth with death as a warning to not steal Rod away from her. She’s fiery! The rest of the cast are serviceable, but that’s about it.

One thing I’m not really sure about is how this leopard-spirit-vampirism is transmitted. Does decapitation cause it? A whipping until one’s clothes are torn off? Being drowned in developing fluid? Being bitten or scratched by another leopard-vampire? I’m guessing any sort of death will do, as long as the evil leopard spirits are around to possess you, and reanimate the corpse. The flogging into nudity or beheading are probably just embellishments for us leering viewers for a process that really just requires any sort of death. There we go, all explained. Is the film frightening at all? Not hugely, but the fake leopard heads peeking from behind bushes creeped me out for some reason. Still, films of this type and era are best watched for entertainment value rather than outright scares. I’ll have to watch Demon Witch Child as an example of De Ossorio taking on the possession genre, as I’ve heard it’s quite effective. If you’re looking for a simple little story with some jungle backdrops, voodoo, blood, skin, vampires and zombies, you could probably do a lot worse than The Night of the Sorcerers. Unfortunately, I may have developed a new phobia for plastic leopard heads on sticks, as a result of my experience!