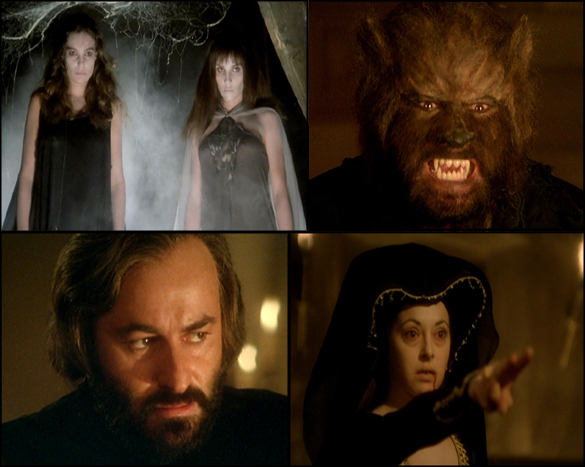 Also known as:
Retorno del Hombre-Lobo
Return of the Wolfman
The Craving

Spanish horror maestro Paul Naschy is someone this old author really admires. He seems to have a genuine love of the cinema of the macabre, having written, directed and acted in multitudes of classics. At the rate I review titles I'll probably only scratch the surface of his output, but if I can create a particle of extra interest in these gems, it's worth it. With Night of the Werewolf the great man actually directed, as well as acted and wrote the screenplay under his birth name, Jacinto Molina. And it's a fine, atmospheric job he did too. Let's take a look at all the lyncanthropic action. 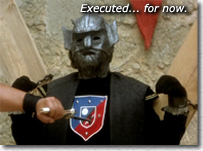 It's medieval Hungary in the sixteenth century. Evil Countess Elisabeth Bathory (Julia Saly), condemned vampire and witch, is being put to death along with various servants and relatives. In addition, nobleman and unfortunate werewolf Waldemar Daninsky is being executed. This is because, as Bathory's persecutors state, he is under her Satanic power and is her abject slave in evil pursuits. Nonetheless Daninsky welcomes death as an end to his suffering, and as a freedom for his spirit. Soon Bathory's acolytes are beheaded, with the Countess condemned to live in a cell until her death. Daninsky has a more gruesome fate, having an iron 'mask of shame' put on his face and a silver cross/dagger hammered into his heart. He dies, hoping it's for all eternity. A quick note on Naschy's Waldemar Daninsky series. While the werewolf generally looks the same, each Daninsky film is about a seperate character who just happens to be called Waldemar Daninsky, with different werewolf origins (even bite by Yeti in one film) and different eras. I'm not sure why this approach was taken, but they're all great werewolf films, rest assured. 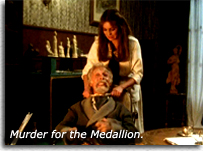 Back to the plot. It's Rome, the present day. Bikini-clad students Karen (Azucena Hernández) and Barbara (Pilar Alcón) are explaining to their poolside male friends about their expedition to a castle in Hungary. It's to track down the grave of the selfsame Countess Elisabeth Bathory. The boys laugh them off as the two girls take off to find Erika (Silvia Aguilar), the driving force behind the whole adventure. We find Erika meeting with her old mentor, the wheelchair-bound Professor (Narciso Ibáńez Menta) at his mansion. Erika concerns the Professor when she tells him how she communicates regularly with Elisabeth Bathory's undying spirit. Then, Erika tells the old man that she wants his golden amulet for the purposes of reanimating the dead Countess. He refuses and is outraged at such a premise, stating that they are scientists, not 'charlatans'. He calls for his maid, of whom Erika sinisterly says cannot hear him because she killed her earlier. She them promptly throttles the man and takes the magical amulet, revealing herself as entirely evil. Meanwhile, grave-robbers find Daninsky's crypt in Hungary and greedily remove the silver dagger. He suddenly revives and, now a werewolf under the metal mask, quickly strangles them both.

Later, all three girls have made the trip to Hungary. Buying a old car at an inn, they're warned by the inn-keeper of bandits and murderers on the road to the castle, as well as more supernatural menaces. They're watched by a group of rogues as they leave, and the inn-keeper's wife crosses her chest as they continue her travels. Sure enough, a tree falls across their path on the road, and bandits leap out to take their money and do worse, admiring the beauty of their prisoners. A strangely-dressed figure shoots arrows from a crossbow into their assailants and kills them where they stand. Frightened but pushed by Erika to continue, the group presses on. They find the castle and investigating, finally find the tomb of Elisabeth Bathory. Karen is startled by the appearance of a burn-scarred young woman called Mircalla (Beatriz Elorrieta), and also Daninsky again, thinking he is defending his castle from robbers. Karen falls into an open grave and is injured. We then move forward in time, perhaps a few days. As Karen recovers, Erika and Barbara have been guests of Daninsky - who goes under a different name - and Mircalla. Erika is positive that their host is a reanimated werewolf, given his strange medieval tunic and manner. Barbara thinks it's all crazy, but has nowhere to go until Karen recovers. When Karen recovers, she and Waldemar fall in love. Mircalla is convinced that Karen is the ultimate beloved, who will sacrifice herself to bring Waldemar's spirit eternal peace. We later find out that the mystic woman known as Mircalla was burned as a witch by the ignorant populace, but a rainstorm blew over as she was being executed, and saved her. Daninsky took her in from exile, and allows her to stay in the relative comfort of the castle. Now, Mircalla admits to Karen that she too loves Waldemar, but that Karen is the only one that he will ever love. 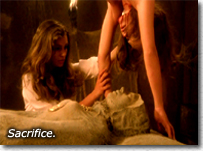 A full moon rises and the cursed man painfully transforms into his lupine self. The makeup for Naschy's werewolf is, I feel, the best ever for his Waldemar Daninsky films. With wolf-like ears on top of his head he looks even more effective that his usual smooth-craniumed, fur-faced self. Karen screams in horror as the growling monster moves to attack her. Mircalla intervenes with the silver cross/dagger, which repels the werewolf and makes him crash through a window outside. Daninsky then goes on to murder a man camping outside, and the inn-keeper's wife. As the carnage outside takes place, Erika has hypnotised Barbara with the medallion, and has hung her upside-down and naked over Bathory's sculpted coffin. She slashed the mesmerised girl's throat and blood streams into the mouth of Bathory's statue on the coffin. The Vampire Woman revives spectacularly, with the stone lid levitating off and one of her rotting, zombified acolytes smashing through his stone grave to join her. Elisabeth bites Erika, promising her eternal life and power at the ceremony of the next full moon, when they can contact Satan. She instructs her to attack and bring Mircalla back as one of them. Erika, now a vampire, enters Mircalla's bedroom but is scarred painfully on the forehead with a crucifix as Mircalla attempts to defend herself. It's no good though, Erika knocks the cross out of her hand and takes her away. Elisabeth, Erika and the now-vampirized Mircalla and Barbara begin a reign of terror in the area and the villagers are terrified of vampires and werewolves now. Karen is attacked by the now-vampirized Barbara but horrified, kills her with the silver dagger. Barbara returns to her normal self in death. Waldemar and Karen try to track down the vampires back at Elisabeth's tomb, but they have moved to another crypt, and they only find the zombie, who is quickly and all-too-easily despatched by Waldemar even in his human form. 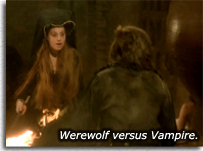 Later, Elisabeth sends Erika to bring Waldemar into the vampiric fold, but Karen repels her with a cross. Plan B is to vampirize Karen, which Elisabeth begins to do in night-time visits. As Elisabeth's influence grows, eventually Karen knocks Waldemar out with a silver cane. The hapless Daninsky is brought back to Elisabeth's lair for enslavement. Waking up in the rat-filled catacombs, he kills Mircalla with a stake and his friend can finally rest in peace. Again, the Daninsky curse takes hold, as he changes into a werewolf when the moon rises. The monster kills Erika by throwing her on to a stake. Elisabeth herself attacks, trying to force El Hombre Lobo to again come under her Satanic thrall. Somehow, the monster resists this time, and the Werewolf and the Vampire Woman begin a pitched battle. It's a nifty little fight, with the evil Countess hurling stuff at the werewolf telekinetically, but eventually he gets the better of her, and bites her throat out. He throws her dead form into a coffin. As the Countess dies, the marks on Karen's throat dissapear and she regains her normal senses. Clutching the silver dagger, she moves closer to the Wolfman as he growls ferociously. Will true love win out as the girl and the werewolf approach each other?

Sharing quite a lot of plot and action with Naschy's Werewolf Shadow, Night of the Werewolf is fine gothic fare. It's beautifully photographed, with the vampire sequences particular well-lit and fog-shrouded. Naschy certainly has an eye for this sort of thing. The score is simple but effective. Acting chops are all quite good, with Silvia Aguilar as the evil Erika conveying obsessed, evil and driven well. Azucena Hernandez's Karen is willowy and sad - and beautiful of course, as Naschy's women always are - but was the best choice in the cast to play Waldemar's noble love interest. Naschy himself is probably the best in the ensemble, playing noble, haunted, agonised and romantic with equal skill. Julia Saly as Countess Elisabeth Bathory is probably the weakest link in the film, unable to convey the timeless evil of the vampire or her fierce intelligence. Her face is actually quite bland, but it doesn't really damage the film. The werewolf scenes are enjoyable, with Naschy losing himself completely to the snarling, mindless monster, the excellent makeup helping immensely. The film swings along nicely, with not a dull moment to be found. Do I have any quibbles about Night of the Werewolf? Perhaps the Countess's zombie henchman could have put up a better fight, but Waldemar does say he was left there only to 'scare' them off. As mentioned before, the film really shines in the vampire scenes and Silvia Aguilar's Erika makes a particularly frightening and fierce vampire. When repulsed by the cross she becomes a hissing, shrieking horror that even made this grizzled reviewer flinch a bit.

So, I think you can tell I'm going to recommend this one. It scores well as a werewolf, and as a vampire picture. Perhaps I'm a bit biased being a full-on Paul Naschy fan, but I think any fan of gothic horror could enjoy this one. It's well-made, and has a fair amount of Hammer-level blood and nudity. There's no dangling entrails or softcore sex scenes, but the abundance of atmosphere and Naschy's iconic Hombre Lobo more than makes up for it.