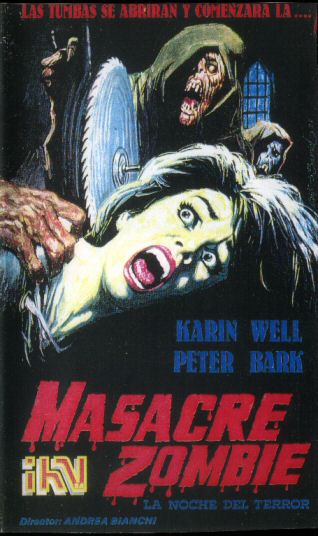 This is one of my favorite films, bar none. It's one of the kings of the zombie movie - I won't say it topples the Romero trilogy, or Fulci's Zombie, but it's way up there in the enjoyment stakes. It has one of the most rip-roaring, downbeat endings to any horror movie I've seen, plus, as an added treat, you get to see a twenty-four year old midget named Peter Bark play a ten-year old boy named Michael - one of the creepiest "kids" I've ever seen, bite his own mother's nipple off. Director Andrea Bianchi has crafted a classic of full-on zombie-gore-sexploitation, and let's face it, we wouldn't have it any other way, would we? I'll let you in on the socko ending at the end of this review - if you don't want to know it, turn away now.

We start with an ageing professor (Raimondo Barbieri) exploring some Etruscan ruins. He seems to have hit upon a revelation of some sort, but as soon as he enters a tomb, he's beset by mouldering zombies. These aren't the George Romero type of zombie - blue face paint, a smattering of blood here and there. These are proper rotting corpses like in Fulci's oeuvre - maggots falling off decayed faces, the works. Although, some of them seem to have pretty polished-looking, new eyeballs hanging down on stalks! Anyway, the slow-moving creatures attack as he screams, "No, I'm your friend!" This soon-to-be-ex-professor needs a healthier social life. The zombies make it clear they are cannibals, with the traditional "intestinal pull".

Italian celebrity Karen Well, plays Janet, the Mother of the weird ten-year-old, Michael. She's with her lover and son, and a group of several friends, at Professor Ayre's mansion near the ruins. They were to meet him there for a gathering but of course, the good Professor has had his intestines pulled out so he's a bit indisposed. There are some sexual shenanigans amongst the couples, as you'd expect. Soon though, the zombie mayhem begins as the ghouls have now been released from their prison. An amorous couple are attacked by a particularly maggot-dripping, decaying specimen, but escape back to the mansion. One of the women fleeing the horrors gets her foot caught in a rabbit-trap, but is dragged off just in time. The hordes follow.

Entering the mansion, they attack Karen, Michael and her lover. They make short work of the lover, even though he shoots them, they just bleed green ooze and keep on coming. Intestines fly again. Karen sets one on fire, and that seems to stop him in his tracks. They all barricade themselves in the mansion, along with the servants. We soon find out though, that rotting though these creatures are, they still know how to use axes, scythes and battering rams, and begin breaking down the besieged group's defences. One of the maids has her head lopped off by a scythe-wielding ghoul, after her hand had been nailed by a particularly well-aimed bolt. These zombies are mean and smart! Another member of the group has her face pulled through a broken window in an obvious homage to Fulci's Zombie.

More attacks follow and we realize that the zombies can be killed by smashing open their skulls and spilling out their gooey green brains. We also realize that Michael has a thing for his Mother when he tries to fondle her breast and feel her up, to which of course he receives a slap. After this scene we understand why they cast a midget... The woman who was dragged through glass, now zombified, kills Michael after he runs away in shame. Karen, after despatching the female zombie by smashing her head into a pink, brain-spewing mess over a bath, is grief-stricken and the actress actually pulls grief off pretty well. She doesn't just shrug her "son's" death off in two seconds.

The dead are moving through the mansion now, along with the zombie Professor who kills and eats the butler. That's gratitude for you. What's left of the group escape, running through the countryside until they find an old monastery. Thinking there will be shelter, they instead find a horde of undead monks! This film has it all, I tell you! Losing another member, they escape this deathtrap and find shelter in a basement toolshed. More zombies! Including the zombie-Michael, who after being soothed towards sucking at his mother's breast - Karen is completely deluded by now - he proceeds to bite most of it off, and eat it. Wholesale carnage ensues as the surviving guy is dragged towards a newly-activated circular saw by zombie-monks, and dozens of rotting hands get closer and closer towards the surviving, screaming heroine...

As I said earlier, quite an ending! Believe me, telling you that everyone dies won't spoil it for you. Just watch the whole piece and enjoy. I love Italian horror movies, and this one has it all. Great atmosphere, sex, even a bit of kinkiness, gallons of gore, acting histrionics, great music, pretty good zombies - not quite as good as Fulci's but I love the use of tools! - and a relentless attitude from start to finish. If horror and zombies are your thing, take a view of this one any way you can. You won't regret shelling out some sheckels. It's a wonderful addition to any zombie-lover's collection.