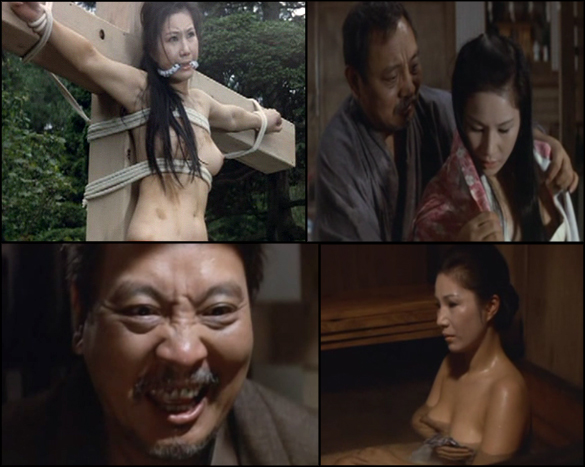 Obsession. These pages wouldn't exist without it. To some degree I'm obsessed with cult cinema as a whole, but particular subsets of cinema set me to lying awake at night, my mind spinning on ways to obtain complete collections, on writing that next review, viewing that glorious image once more. I'm obsessed with the works of director Jesus Franco. Russ Meyer. Jean Rollin. With the Blaxploitation genre. Films with Charlton Heston in them. With cinematic muses such as Soledad Miranda and Lina Romay. This paragraph could go on ad infinitum. My latest obsession, something that has been gnawing at my subconscious for some years,and has now boiled to the surface, are the Japanese Nikkatsu S & M films that star Naomi Tani.

That's not to say I want to see every single Nikkatsu film, or every Naomi Tani film. If I had three lifetimes, then maybe yes. I've yet to see a Nikkatsu film that I didn't enjoy though, such as Secret Chronicle, Prostitution Market. It's just that Nikkatsu and Naomi are such a potent combination in my mind, a perfect storm of aesthetics, I just can't turn away. That opening Nikkatsu logo, such a thing of beauty. Then there's Ms Tani herself, a vision in every film. Interestingly enough, and perhaps 'too much information' for you, the S & M scenes don't actually turn me on. It's just the visual artistry woven in with these bizarre plotlines that, I could only imagine, would turn any slightly feminist-minded person away. Always lushly photographed, produced and scored, the films invariably have a sweaty, sick-minded man, spirit Naomi's character away to some secluded place and subject her to various S & M practices, usually involving her being suspended in traditional Japanses rope poses. Eventually she converts to the man's practices and can't return to her old life, sometimes even proving herself the man's superior in perversion.

I can't honestly tell you what's captivated me about these films. I can only defend them on the sensuous beauty that's being captured on film, the poetry of the landscapes and music. Each one has a different setting. Sometimes ancient Japan, sometimes contemporary, sometimes during the world wars. I don't know a whole lot about Japanese culture per se, so I'm not about to launch into a criticism of their cinema or their predilections. I guess it's just some sort of instinctive thing - I don't know much about art but I know what I like, if you get my drift. So if women being subjected to stylised torture in a film is inherently offensive to you, I suggest you don't continue reading this review. Now, to tonight's film, which is actually quite nasty and it's protagonists have very little redeeming features. It's certainly a perverse outcome at the end and one that would alienate most decent-thinking folks, especially women! Be warned, I'm going to give away the ending, as it's so integral to an understanding of the film.

As the subtitles told me, we're in the early Showa era, 1928. It's lovely hilly countryside in Japan where we meet Namiji (Tani), wife of a rich farmer. Namiji is his wife because her father risked the family's money, and lost it all. Her father sold her to this course, abusive man who gloats at this 'noble lady's fate. The first time we see them together he is tying up the passive Namiji and having rough sex with her. We also realise one of the young farm helpers, Shinkichi, is in love with her but dare not reveal his feelings. The farmer's younger sister shows up for a holiday, chauffered in a Rolls-Royce so we know for sure this is a rich family. They way these two behave together there's obviously an incestuous history between them. The farmer basically molests Namiji in front of everyone, to which his sister only laughs. After more rough sex with the farmer and Namiji, Shinkichi is seen running a letter to the city for her. He delivers it to a young doctor in the city and returns. Later the farmer's sister tries to seduce Shinkichi but the simple, virginal man is inept and runs away. Unfortunately for Namiji, she also spots Shinkichi delivering a package to Namiji, and what is behind it all.

The next scene is Namiji, basically hog-tied, being beaten by the farmer and his henchmen with a bamboo pole. The farmer interrogates Namiji about her 'boyfriend' and confronts her with a lock of hair found in the parcel. Later, The farmer's sister visits the tied-up Namiji and Shinkichi, cutting the rest of her clothes away and forcing her to urinate in front of them. The sister laughs and skips around with glee. She's the equal of the farmer in the sadism stakes. Her husband shows up but is mainly ignored by his disdainful wife. They drag him to Namiji and Shinkichi's cage - yes, they're now in a cage - to view the spectacle. Namiji is now in a set of stocks and the farmer torments his wife with the prospect of either burning the lock of her boyfriend's hair or having sex with Shinkichi. Reluctantly, Namiji agrees to have sex with Shinkichi on the condition she orgasms in ten minutes. Shinkichi tries to pleasure the hapless woman but fails, so the farmer has one of his indentured helpers penetrate her with a dildo.

More torture awaits. The drunken farmer parades Namiji and Shinkichi naked on a horse, saying they're lucky they're doing this in private and not in public, as would have been done to adulterers in the Edo period. Next, Namiji and Shinkichi are crucified - without the nails - in the farmer's garden as the tormentors take tea. Surpisingly, Namiji's bespectacled boyfriend turns up to rescue her. The farmer is shocked but excited at causing suffering to him too. The farmer has one of his lackey's cut off Namiji's underwear which causes great hilarity for the farmer and his sister, for some reason. They laugh that Namiji has a 'monkey's vagina' but the boyfriend says he loves her and would be 'an animal' for her. The farmer then shrieks that they'll have a 'monkey's wedding' in celebration.

After a mock wedding, to which the farmer's invited dozens of drunken local men, the men watch througha gap in the door as the boyfriend tries to make love to Namiji. He finds to his horror that her 'vase' has been tightly bound with rope and he can't do a thing about it. The farmer and his lackeys then drag Namiji outside in the pouring rain, tie her to a pole and start to ravish her. The weak boyfriend gives up under the onslaught of the crowd. The farmer's sister, aroused by the spectacle, sneaks into Shinkichi's cage and demands sex for his release, but her equally aroused husband follows her there slaps her around, demanding respect and has forceful sex with her. The perverse woman is finally fulfilled. Shinkichi sneaks out into the rain, cutting Namiji's bonds and injuring the farmer in the process. The farmer's sister is disappointed in her brother's hysterical, grieving reaction to his wife leaving. Shinkichi and Namiji escape into the countryside and make love in a barn. After a tender moment of afterglow, Shinkichi is horrified when Namiji spots some rope asks him to tie her up. After pleading with her to stop, he flees in disgust and bewilderment.

Namiji returns to her brutish animal of a husband, now distraught with loneliness and longing. Overjoyed at her return, he has now become quite tender and loving. He drapes a kimono over her shoulders, and asks if he can burn the lock of hair now. Namiji quietly agrees. Hair burned, they begin their new life together. Shinkichi runs through the hills toward town, and a new freedom. We end the film with the sight of two monkeys tied together in what was once Namiji's cage.

Well. What can I say about the plot of Noble Lady, Bound Vase? A woman is sold into an exploitative marriage by an uncaring father, treated badly by her jailor/partner and despite having the chance to escape, returns to him. The snaggle-toothed, boorish bad guy 'gets the girl.' The farmer does basically everything wrong by Namiji and still wins her love, or at least presence, in the end. Although we get the feeling she would have stayed with Shinkichi if he'd gone along with her newly-found 'needs.' Earlier in the film we see a subtle hint of Namiji's sensuous experience of being bound the way she fingers her bindings. So perhaps Namiji learns to love a masochistic lifestyle rather than a man, and will leave him at some stage - who knows? Look, I can't try to defend what this film depicts, it's storylines and values. By most standards of 2010, they're wrong in every sense. Still, I have to relay to you, gentle reader, that Noble Lady, Bound Vase is a work of art. Green hills, flowers, drops of water falling from roofs, gentle flute music playing. Vibrant, colourful costumes, the setting of the farm and warm interiors. This is not some cheap pornographic film, made in someone's basement. This is a beautifully made piece of wide-screen cinema. I'm sure there's a lot of symbolism that I don't pick up on, but I don't really care, it's a visual feast to let wash over you, if you let it. There does seem to be a running theme of monkeys throughout, as they often pop up in the film.

Of course, Naomi Tani's the main focus of the film, and she carries it well. Naturally she's physically beautiful with a voluptuous body and perfect face, but the woman has acting chops as well. We do get a sense of her confusion and inner turmoil, as she suffers, but a fragment of her enjoys, her horrible husband's treatment. The actor playing the farmer, and the actress playing his perverse sister, are also excellent in their roles, skipping and jumping in demonic glee, at each new indignity they heap on poor Namiji. The change of heart in the farmer, right at the end, is a bit abrupt and unbelievable, but it certainly gives the actor the chance to show a different side of his character. It's interesting to see his expression change from a mask of joyful malice, to a soft face that's actually quite kind. The boyfriend is also good at conveying his goodness but ultimate weakness, when he gives up on defending his love. Director Masaru Konuma is to be commended in exploring these different aspects of human nature and producing quite a potent cauldron of love, lust, sadism, envy and grief. The cinematography of the film is also splendid, with glorious close-ups of faces in all kinds of states, to exploring the rural expanse and mountains of Japan. This is one director who loves nature.

To sum up, I won't recommend Noble Lady, Bound Vase to any but the most open-minded of cineastes out there. On my own terms, I enjoyed it as a filmic experience, and it certainly adds fuel to my Nikkatsu/Naomi Tani obsession.

Obsessions … they can drive you mad, or drive you to create. Fingers crossed creativity wins for the time being!