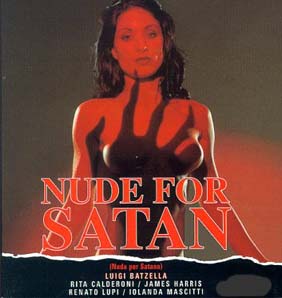 Ah, Rita Calderoni. If I had two lifetimes, I'd dedicate a website to you. I've never seen a beautiful, buxom Italian woman, who spends 85 percent of a movie nude, scream in such a horrified manner at such an obviously fake, giant spider. But more of that later. There's gems of cinematic pleasure throughout this movie.

I have a real weakness for Italian horror. It can be derivative, but it's often highly artistic and driven to a level of extremity that few American or British films can muster. Sometimes it's pure trash but highly enjoyable. "Nude for Satan" falls into this category. And let's face it, you gotta love that title, if nothing else! But the film has its merits if you like the schlock factor.

The opening scene has our beloved Rita running through a forest, clothed only in an open negligee. Nudity from the opening few seconds! But soon we're back in a reality, of sorts. A doctor is driving his Volkswagen down a dark lane, near an imposing castle. He swerves to avoid hitting a mysterious woman and as he leaves his car, there's a "car accident" - depicted by an offscreen crash sound and a wheel rolling into frame - and a woman in the car is unconscious. He tries to get help in the castle, only to ensnare both himself and the woman in a supernatural maelstrom of Satanic horror.

Well, what actually happens is that they meet up with evil doppelgangers of themselves who live in another dimension, "out of time". There is an evil Master pulling the strings of events, who seems to be battling it out with a demonic enemy called "Astaroth" (which he yells a lot) a lesbian handservant and a malevolent butler who laughs constantly and has an obviously blacked-out tooth. Before the end we're treated to copious nudity (all female), lesbian and straight softcore scenes, the whipping of a nude woman (you barely see it, you just guess what's happening) Ms. Calderoni falling into a hideously fake giant spider-web and being attacked by a hideously fake giant spider which looks like a ball of papier-mache and never once moves. We also get a climactic demonic orgy (nude, ugly people dancing slowly - how evil and depraved is that...) before all the depraved monsters are repelled by some righteous fire. Everything comes full circle at the end, but only one of the participants has survived....

This film should be better known. It has all the qualities to elevate it into the pantheon of bad classics. The camerawork has to be seen to be believed - we contantly zoom in and out of character's faces, but only occasionally zoom in squarely where we should be. The music's weird but effective, probably the best technical aspect of the film. The acting consists mainly of screaming, yelling or laughing in that way only evil people can. I do appreciate the constant nudity though, except for the scene where lovely Rita lounges back nude in the evil version of the Doctor's arms to show the dirtiest pair of feet I've ever scene in a film! Didn't the director see this? Talk about a passion-killer! Oh well, I'm big enough to forgive. Maybe the Italians do it differently ... And that spider. Even Ed Wood Junior got more motion out of his broken rubber octopuses. A stagehand could have shaken it, for Satan's sake!

Long live seventies Italian horror, in all it's forms!