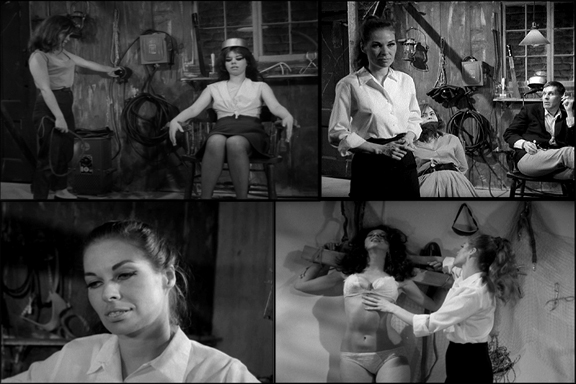 With bondage and torture imagery reminiscent of the pictures of Irving Klaw, the black-and-white Olga movies have to be seen to be believed. I suspect from what I've seen from my Something Weird three-pack, that these virtually plotless films basically blend into one another, but we can at least make a start with Olga's House of Shame, apparently the third in the series. And what a title that is. As directed by Joseph P. Mawra, Audrey Campbell becomes a cult icon as Olga, probably a direct forerunner to Dyanne Thorne as Ilsa, She-Wolf of the SS. Although, the similarities between Olga and Ilsa are more mental than physical, as Olga never gets her gear off and is petite in stature, compared to the bountiful Dyanne Thorne as Nazi torturer Ilsa. Even maverick producer George Weiss from Ed Wood's Glen or Glenda is involved as producer and co-writer with Mawra, so folks, if you're into oddball cinema you probably need to catch this strange - and short at just over an hour - film.

There isn't much plot to be had, but I'll describe the basics. As our male narrator (Joel Holt) tells us, Olga is a drug-runner, brothel madam and all-round bad-guy. As we commence the film her partner in crime, brother Nick (W.B. Parker), is dragging an unconscious woman Elaine (Judy Young) into their forest lair in an abandoned sawmill. Olga's new venture is jewel smuggling, and as Nick explains to the furious Olga, courier Elaine has swindled them of part of the recent take. Elaine won't confess, so Olga slaps her around, a very anemic slap-fest by Audrey, I must say! Olga ties her to a chair and hits her face with a sort-of rubber truncheon-thing, and soon one half of her face is covered with fake-looking welts. Olga leaves Elaine to ponder what miseries she will inflict on her. When Olga begins laying into Elaine, there is no synchronous sound and we hear Olga narrating the torture, along with bombastic film-library music. Eighty per cent of the film is like this - there are only several sound scenes, the majority being narrated by Audrey or the male voice.

The rest of the film becomes virtually story-less. One of Olga's girls displease her or betrays her in some way, and is subsequently tortured by the gleeful female sadist or brother Nick. One girl is given a soldering iron to the breasts, the other rubbed down with a rough horse-brush. The torture-sets are just bare rooms with netting fixed to the walls, with the tools of torture hanging in them for us to see. No nudity quite yet though, folks. As the tortures continue, Olga gradually becomes convinced Elaine was working for Nadja (Ella Daphne) an associate of hers. Occasionally Olga will bring in a belly-dancer to liven up the proceedings for her girls. Still, after being tortured I'm not sure what this is meant to do for them, but I guess it's more for our viewing benefit! As other girls are tortured we begin to see breasts - I guess Mawra was leaving something special for later.

Elaine is released from her captivity by a sympathetic Olga-girl. She makes a run for it through the forest, but Nick discovers her missing, and he and Olga give chase. We are told how determined Olga is, and eventually she captures the exhausted Elaine. Olga gives Elaine her last chance to turn in her other boss and become the hunter, not the hunted. Elaine relents and turns Nadja in. Olga offers Nadja a chance to join her jewel-smuggling syndicate, but the haughty woman refuses, saying she can make much more money on her own. Olga ties her to a tree to think about her refusal, but no torture just yet, which is a particular mind-game Olga is using to break Nadja. Two other topless girls are tied to trees and whipped by Elaine, whom Olga wants as an apprentice. As Elaine converts to the dark side of Olga, she willingly puts one of the rebellious girls in an electric chair and fries her brain, leaving her a twitching mess. Nick confesses to Elaine that he's in love with her, and she initially responds, then pulls away, leaving him laughing at the irony of Elaine in control. She says when she wants him, she'll send for him.

Olga puts Nadja on a horse-leash and has her run around her in circles, in the forest. As Nadja begins to give in, she hands her over to Elaine to complete the breaking, whom has joined her competely as an apprentice. Olga is delighted.

With a minimum of plot and drama we can only evaluate this film on it's bondage and torture set-pieces. We don't even have the presence of sound for the set-pieces - just narration and crashing classical music. Putting my mind back to some sleazy flea-pit of a grindhouse joint in the sixties, these films would be been pretty titillating, extreme stuff back then. The sweaty sickos in the audience would have gotten quite a charge out of them. Now, they seem more like historical curiosity pieces, with the actual torture scenes almost risible in their gentleness - if that makes any sense. When Olga slaps someone, there's obviously no impact. There is also no sense of impact with the whips or truncheons, and one of the girls being whipped while hanging from a tree actually looks bored all through it! Don't expect to need your hands over your eyes in horror. The 'wounds' all look like thin paint very haphazardly applied. So, with all this in mind, there's little erotic or intense content for modern audiences.

What's to enjoy, then? Audrey as Olga is pretty memorable. Her performance and expressions when gleeful or angry are just wonderful. She has a very distinctive face, and perhaps she's a significant reason why the Olga series is remembered today. The torture scenes, in all their black-and-white glory, are very retro now, and any still taken could look good along side your Bettie Page collection. The main enjoyment for me is just to see exploitation cinema really letting rip before things got boring in our modern age. My film collection is getting bigger every day, but with very little content past the eighties.

If you're a sensitive soul, then Olga's House of Shame could possibly offend. Otherwise, this one is at least worth a single view to immerse yourself in the netherworld of sixties cinema. Something Weird's set of three Olga films - this one, White Slaves of Chinatown and Olga's Dance-Hall Girls on one disc - is probably good value for money if you want to try stepping into Olga's den of sleaze and iniquity.