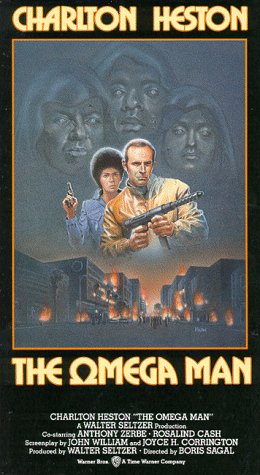 This film always fills me with a warm nostalgic feeling even though the subject matter's fairly grim. Lead actor Charlton Heston, to this ghoul's mind, always lends a certain gravitas to any film. Hence, the original planet of the apes, soylent green and this one stand out as memorable and effective science fiction. Let's forget about the man's views on guns and concentrate on his acting and screen presence. I've seen the film numerous times, and mainly when I was growing up in the seventies. It contains the fashions, filming styles and soundtracks of this era that I love so much. But let's get on with it.

Scientist Robert Neville (Heston) could be the last man on Earth. He was, on behalf of the government, experimenting on a vaccine against a biological warfare attack. In the end, the enemy did attack America with a plague and kill most of the population, but Neville survived by injecting himself with the only sample of the serum. He survived to live in an empty city, everything at his disposal, but to live in fear of the scarred, albino mutants who are the only survivors of the plague. These other survivors are all hostile and insane, only come out at night - the sunlight is agony for them - and are all in the thrall of their leader, Matthias, played by Anthony Zerbe. Matthias hates Neville and all he stands for, trying to make life hell for him. Neville, at night, is holed up in a fortress-apartment, and kills as many of the mutants he can, and he's ruthless about it, too. The mutants hate technology and want to drag their society back to a dark age where they're safe from progress.

In the daytime, Neville is free to roam, in theory alone, but the loneliness is hard on him. He sits in movie theatres and watches Woodstock, talks to himself and hears phantom phones ringing. But he can drive any car he likes, and attain any riches he wants in this empty, corpse-ridden world. Soon enough, he runs into Lisa, a survivor of the plague who hasn't turned mutant yet. She's somewhat hostile but is part of a small community of survivors, one of which Neville accidentally killed. Neville is accepted into this community and decides to work on a vaccine from his own blood. He saves one half-transformed boy, who is killed by the mutants for his contact with Neville. Neville and Lisa (incidentally, a black woman), fall in love, but Lisa mutates into an Albino instantly - sometimes the change is slow, sometimes very fast - and Neville ends up killed by the hateful mutants. However, the rest of the survivors have the vaccine and will go on to save others, in the end reviving the world.

It's not a perfect film by any means, but I think it has a certain atmosphere that lingers in the mind. The concept of being totally alone, with no choice of companionship, is a frightening one and Heston pulls off the role quite well, mixing cockiness with vulnerability in equal measures. Anthony Zerbe plays obsessed bad guy quite well but for the most part, until the normal survivors community comes into the picture, it's a one-man show. The Lisa character (can't remember the actress) is effective, but not in it that long - she's a good sassy foil for Heston, though.

The mutants could have been more frightening, but I guess budget constraints were in effect, or the makers wanted to keep things subtle. It's a fairly simple film in a lot of ways, not requiring a lot of special effects or elaborate mounting. I'd recommend it to lovers of dystopian sci-fi - it's not especially a horror film. It also has a strong seventies feel, so if that aesthetic's not your bag, baby, give it a miss. As I said before, old Chuck adds a certain macho importance to the proceedings, but if you don't respond to it, perhaps pass it up for the next one.