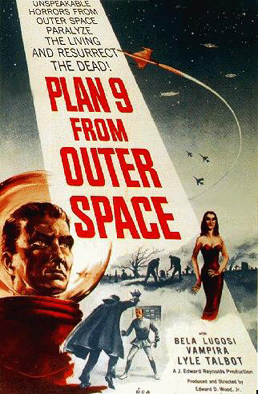 I'm not going to waste your time reviewing "Plan Nine from Outer Space". Chances are, if you've made it this far into GGG you've already seen it, or conversely heard so much about it, that anything I can say is totally redundant - as far as a review goes. So I thought instead to offer a tribute to an inspirational film, via a few personal thoughts and reminiscences. Take from it what you will, you voyeur you, or skip on ahead to another film you haven't heard about.

Tim Burton's film "Ed Wood" opened up the seminal director's aesthetic to, well, some of the masses at least. That may have been a starting point for a lot of people to appreciate Wood's oeuvre, but it was probably the infamous Medved Brothers' books - the 50 worst movies of all time, etc. etc. - that started the ball rolling to a large degree. They were a big factor in the "bad movies are good" schtick that a lot of people have fun with. In my case, reading these books was, despite their smug tone, an education on some of the key titles and directors to explore in the future for a different cinematic experience. I finally caught a screening of the classic as a double with "Robot Monster" - probably a "worse" film than Plan nine - and Lordy, a fun time was had by all at the old Valhalla cinema in Northcote, Melbourne, Australia.

For a start, I hadn't experienced things like hordes of paper plates being thrown into the sky when the rickety saucers flew overhead. The film was being pilloried with gales of laughter, but admittedly, it was fun to participate. I even emitted a chuckle or two myself. But is Plan Nine really that bad?

In many ways, probably yes. Technically, it could probably be thrown together by thirteen-year-olds. I'd never seen actors kicking over sets (tombstones) before, or for that matter, sets as crude as the aeroplane cockpit, which has a hallucinatory minimalism, to say the least! Acting varies from corpse level of animation to silent-screen histrionics. The dialogue is music to the ears though, and I get so much entertainment from it, I just can't call it bad. I'd almost call them soliloquies. The plot itself must have been conceived at the end of a major bender.

But, you know what? I don't really care about any of that stuff. This films mixes great ingredients; glimpses of Bela Lugosi, flying saucers, zombies, and some quite revolutionary thoughts for a film of that era, as Danny Peary wrote about in his "Cult Movies" books. The macho men were put down as headstrong, stupid fools. The current arms race would end in the destruction of the Universe, through the evils of the Solaronite bomb. His movies also allowed gays and transvestites to appear as themselves in admittedly humorous - unintentionally - roles, but at least they were themselves. You can't tell me Bunny Breckinridge as the Great Alien Leader, wasn't totally playing himself and being proud of it.

I love the B-movie pantheon and all it represents, pure entertainment. The imagery this film presents is a shining example of it. You've got beautiful silver flying saucers. A Count Dracula-type "Ghoul Man". Stumbling zombies playing by the Morticia-like Vampira and the giant Tor Johnson. Gorgeous black-and-white photography. Graveyards. Weirdo-suited aliens. Oh, it's all wonderful. I would have made this film if I could have, as a kid. "Plan nine" is a gem in this B-pantheon, but not just because it's a "bad" movie, but because there's such a distinctive imagination behind it all. Perhaps a slightly naive, berserk imagination, but they're the ones that make our little lives all the more interesting. Maybe you've seen with a group of friends and has a big laugh or three. Fair enough, too. Maybe try it again though, and while you enjoy the silliness of it all - I won't argue that it's incredibly silly - have a look at the politics and revolutionary concepts and you may enjoy it even more!

A must see for any lover of Cinema.