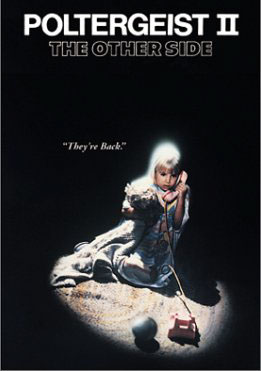 With this oft-quoted line which has become vital to pop culture, young Carol-Anne Freeling realises that those pesky spirits are going to be troubling the Freeling family again.

I like this film more than the original "Poltergeist", which seemed, on recent viewing, an effects-fest with very little plot or cohesion. And looking at the effects these days, to me they don't hold up too well at all. Mind you, they had an impact on the big screen all those years ago.

But, I digress. It's quite sad watching little Heather O'Rourke developing into a good actress, knowing her life would be cut short with an undiagnosed illness in just a few years. I've yet to see Poltergeist three, but I imagine that's an even sadder experience.

To plotlines. The evil spirit of a priest named Kane that led his flock to their deaths years ago in the 1800's is stalking Carol Anne. I think it's because she's a reincarnation of one of the evil pastor's flock, I blinked when there was an explanation and never caught up from there. The Freelings think that because they moved from the original site of their poltergeist trauma that the troubles are over - how wrong they are. The evil has tracked them to Diane's (glowingly played by JoBeth Williams) mother's house, who happens to have psychic powers which have been passed on to Carol Anne. Soon into the film the grandmother dies, ringing her granddaughter on a toy phone after she passes on to the "other side".

The next call Carol Anne receives on the spiritual hotline is from the ghostly pastor, in a great sequence involving drops of rain from a ghostly thunderstorm causing the toy phone to ring. And this is hardly the friendly presence Carol's grandmother was. It's all downhill from there. The evil spirit visits the house, excellently played by Julian Beck. He genuinely looks like a living skeleton, this character is one of the finest macarbe presences I've ever seen. But Steve Freeling, (the father), aided by Taylor, an Indian warrior, resists the evil influence for the moment. There are battles ahead (involving a physical possession through a worm in a bottle of tequila which culminates in the appearance of the credited "Vomit monster") but once the family is transported to "The other side" , good finally wins out and Kane is defeated.

I suspect a lot of people prefer the first poltergeist film as a groundbreaker in horror effects and the like, but I must admit I like this one more. I think the effects and sound arrangement are just as good if not better (Dig that vomit scene) and Kane is one of the best malign spirits in all of cinema. The first film doesn't have that human form of evil presence and suffers for it. The acting is of a high standard throughout, and Heather O'Rourke shows her growing talent as Carol Anne, the poor little psychic girl. My only qualm is the climax in the other side - the backdrop looked like something out of Barbarella or Flash Gordon rather than a supernatural epic.

Overall, highly recommended just to see Pastor Kane, who in my mind outscares Freddy or Jason by miles!