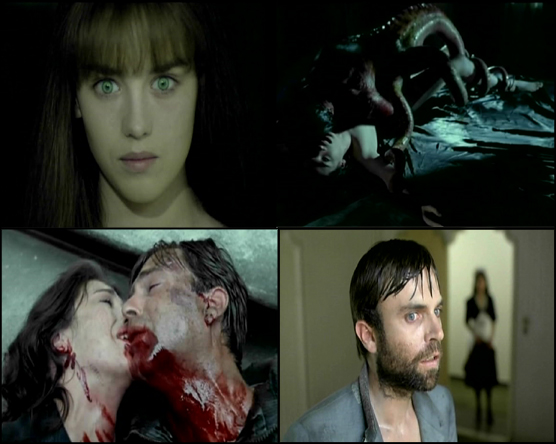 Love it or hate it, there's absolutely no film out there like Polish director/writer Andrzej Zulawski's Possession. It's a challenging film, that defies easy slotting into any particular genre. There's probably hundreds of art-sex-horror-action films out there - but one view of this German/French co-production's performances will let anyone know this one stands out from the pack, for better or worse. For followers of purely mainstream cinema, it would be startling for any Sam Neill fans to stumble across Possession. You'll see your familar actor suffer a complete mental breakdown, and become a slurring, gibbering, violent lunatic. And that's nothing compared to what happens to the heroine of the piece, Isabelle Adjani, who suffers through scenes of such intensity, it's at times hard to watch. Let's tarry no further and get straight into it.

It's a bleak, nineteen-eighties Berlin. Mark (Neill) and Anna (the beauteous Adjani) live with their young son Bob (Michael Hogben) but all is not well from the outset. Mark has returned from a mission - it seems he's some sort of secret agent and wants to leave his agency, but the details are really never given. Mark and Anna's reuniting is hardly enthusiastic, and after off-screen sex their communication deteriorates even more. Anna confesses to having no interest in Mark's life. Later, the saddened Mark finds a love letter to Anna from a man called Heinrich. Mark confronts Anna about this in a restaurant, even though the two sit at seperate tables. Anna admits to the affair and Mark goes berserk, smashing up everything in the eatery. Anna leaves him for good. 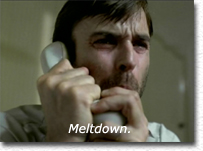 The next we see Mark, he's unshaven, dishevelled and can barely slur enough to put two words together. He tries to call Anna on the telephone and gets nowhere. He rocks to and fro in his bed like a baby, dirty and whimpering. Still, eventually Mark manages to pull himself together enough to change his clothes, shave and look after Bob, even though the apartment is turning into a shambles. Anna visits to check on Bob and the desperate Mark tries to convince her to leave Heinrich, and stay with him and Bob. After some sort of reconciliation, Anna says she'll leave the other man and return. She never does, though. Strangely enough, there is a teacher at Bob's school, Helen, whom Mark has just met and is drawn to, who looks exactly like Anna - except for luminous green eyes. Helen is played by Adjani in a dual role which adds even more strangeness to an already strange film. The angered Mark tracks down the middle-aged Heinrich and pays him a visit. Heinrich (Heinz Bennent) is obviously insane and bisexual, but confesses to the affair. As things get heated, Heinrich uses martial arts on Mark, and beats him to a bloody pulp. He carries him out of his apartment.

Later, when Mark has recovered from the beating, he finds Anna visiting Bob. One thing leads to another, and soon a fierce screaming match erupts with both sides physically violent to the other. Anna's left a bleeding mess after Mark screams that he's beaten her for all "the lies". This scene, one among many, is almost unbearably savage with Adjani excelling as a woman driven to complete irrationality by marital frustration. The fight hurts to watch just through the sheer intensity of Adjani and Neill's performance. The distraught Mark tries to force Anna to stay, but she'll have none of it, running out into the street and causing a spectacular car accident, that stops Mark long enough for her to make her escape. Mark then hires a private investigator to follow Anna, so obsessed is he now. 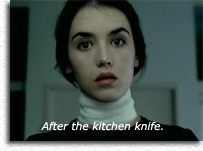 Anna visits again and again, Mark implores her to explain herself. She confesses to loving the other man and, in the middle of cutting up some meat, deliberately slashes her own throat with an electric carving knife. Mark tends the wound on the dazed woman, and then cuts his own arm with it. Having regained her senses, Anna still refuses to cooperate and leaves. Mark's investigator chases her back to a dark apartment and enters on the pretext of checking the windows. He senses something is very wrong with the strange woman, then sees a slime-dripping, tentacled thing lurking in the darkness of one of the rooms. Suddenly Anna is behind him, and kills him with a broken bottle in a very blood-spattered scene. Anna's green-eyed double, Helen visits to check on Bob, and Mark feels drawn to her. Heinrich visits Mark, looking for Anna. The clearly insane man, doing ridiculous dance moves as he argues with Mark, converses with Mark about Anna and God, and ends up leaving with nothing, as Mark at that moment also knows nothing. 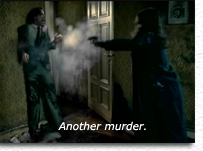 Helen visits again, and the two get naked together, but don't quite have sex. Bob has a bad dream and screams for his mummy, and Mark comforts him. The private investigator's associate, who is also his lover, pleads with Mark for the whereabouts of the missing man. Mark gives him some information and the man enters Anna's apartment. Anna agrees to show the man where his friend is, which also happens to be the room with the creature in it. Aghast, he takes a shot at Anna but the gun misfires. In a screeching fury, Anna attacks him and ends up with his gun. He's soon shot dead. Later Mark watches a video, shot by Heinrich, who appears briefly on-camera, at Anna's ballet school. Anna mistreats a young female student who runs out screaming. We then see possibly the beginning of Anna's madness, and after a bizarre rant about the twin sisters of faith and chance, she admits she's her own worst enemy. 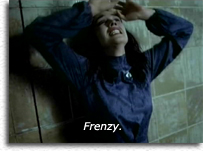 Anna returns to Mark's apartment and rifles through it, searching for clothes. The rooms are soon strewn with clothes. Mark confronts her and it's clear to him, and us we viewers, that she has suffered a complete meltdown. She scratches at her arms and makes no sense. We see her wandering into a church and making pleading, animalistic noises at a statue of Christ. Then, in one of the setpieces of the film, Anna goes completely berserk in an abandoned subway, screaming, gyrating, smashing her groceries, howling, crying, rolling around on the food-strewn ground for what seems like ages. To cap it all off, she seems to suffer some sort of horrendous miscarriage, red and white fluids oozing out of every orifice, especially the obvious one. I can't begin to impart the intensity of this scene, but Adjani's acting prowess carries the sheer horror of what Anna's experiencing far more than any special effects, which are totally convincing anyway. We return to Anna talking to Mark, so this event could have happened in the past, and could, in fact, have been the birth of the creature, I'm not sure. We're never told explicitly where this creature has come from, but we can assume Anna's bitterness, misery, lust and madness has become a tumour-like physical form, managing to somehow be born into the physical world.

Heinrich calls Mark, and ends up finding out where Anna lives. He goes there and tries to resume their relationship. Anna seems to comply but is distracted by the creature's presence. Heinrich ends up spotting the horror and is appalled at not only the tentacled thing, but the pieces of victims kept in her fridge. Anna attacks him and wounded and bleeding, Heinrich narrowly escapes.He calls Mark who arrives later and enters the empty apartment. Mark finds the pieces of corpses in the fridge, and almost loses his mind with the horrible sight. Regaining some sort of composure, he rigs the apartment with explosives. He later meets Heinrich in a bar's toilet and after the wounded, raving man tells him he needs money after all he's been through, Mark kills him by knocking him unconscious, and propping him downwards into a flooded toilet. Not a very nice end! Mark blows up Anna's apartment and returns home to find Anna's annoying friend, who looked after Bob occasionally, murdered by Anna. Anna and Mark have sex, but she leaves again when Bob find them later. Heinrich's mother calls Mark, to tell him Heinrich's soul is missing. Mark says he'll force Anna to tell him what happened to him, and then he'll tell her. Helen shows up again but only to look after the sleeping Bob while Mark goes about his mysterious ways. He meets Anna in Heinrich's apartment, but is shocked to find her having sex with the creature. As they have tentacled sex, Anna moans repeatedly, "Almost". Mark flees. Special effects maestro Carlo Rambaldi, who created ET, has created an amazing, alive-looking creature that genuinely looks like it's salaciously gripping onto Anna and screwing her into an orgasmic frenzy.

Now for some action. Mark's shadowy former employers want to asassinate him for some reason, but after a chase scene Mark narrowly escapes, bleeding and hurt after crashing on a bike. He staggers up to Heinrich's apartment and calls to Anna. Anna comes to him, exultant, bringing along 'her' creature. The creature's completely changed though - he's now an identical copy of Mark. Mark's would-be killers have also tracked him down. Who will survive the ensuing conflagration, and who will escape to play out the final, absolutely stunning last scene in this amazing film?

If you enjoy a filmic experience that's a true challenge, I can only recommend Possession. Neill and Adjani's performances are mesmerising, and you have to admire them for completely submerging themselves in the hysteria unfolding on the screen. I will never forget the subway scene with Adjani going berserk, and the resultant miscarriage/birth. My only problem with Adjani is that as an English language film, sometimes her accent is a bit hard to understand during some key dialogue. Never mind, she's amazing to look at physically and to observe a stellar acting job. Everyone in the film, even strangers on the street, seems insane except for Helen and Bob. Heinz Bennent's Heinrich is an utter fruitcake but you won't forget him in a hurry. Carlo Rambaldi's humanoid-squid creature effects are mainly in shadow but are effective because of it. It seems like a living thing and actually looks lustful when humping Adjani! Zulawski's camera dives and lurches around the warring characters and the gloomy, washed-out Berlin, almost becoming an extra character.

This film also contains one of the most stunning, atmospheric endings I've ever seen. I'll say no more, other than to say it features Adjani, and hopefully my waxing enthusiastic will inspire your interest to see it through. It really left me tingling with that "God, I've just seen an amazing film" sensation. I can't say I understood every philosophical point Zulawski was trying to make, especially with thick accents and no subtitles on the disc, but it's refreshing to see a film that pushes the boundaries and tries to be as intense as it can be. The actors were certainly along for the ride which elevates Possession even further. If this unique cinematic work passes your way sometime, brace yourself for an assault on the emotions and the senses, and a very memorable night of intense viewing.