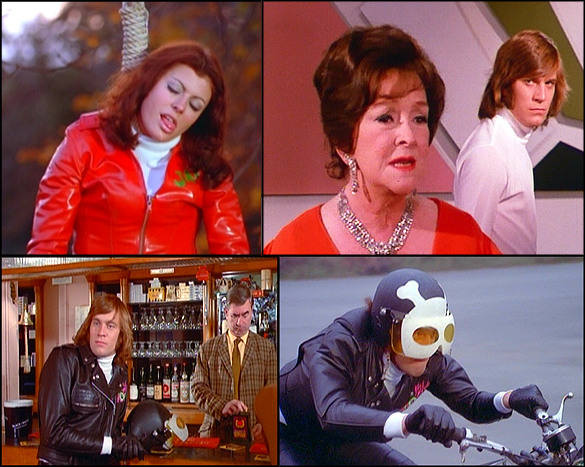 Now, this was one film which had a lot of potential, and some great elements which could have come together to form an enjoyable and oddball cinematic experience. Two words. Undead bikers. A film with this concept from the seventies could have had a generous helping of blood, profanity, rumbling, naked biker mommas and mouldering biker-zombies on the rampage. Does Psychomania live up to what it could have been? I'll reveal all doing the course of this review. It's a distinctly British production, so I wonder if that had something to do with it. With Hammer director Don Sharp at the helm, you could probably expect something of a quality production, and to some extent it's not a bad film, but I do have some misgivings which are later explained.

After some atmospheric music we meet the English biker gang who call themselves "The Living Dead". They're causing 'havoc' in the British countryside. Wearing their customised skull-design helmets, and riding pretty underpowered-looking bikes, they run a vague old guy off the road by playing chicken with him. But gang leader Tom (a foppish Nicky Henson) wants to go further with his thrills - he wants he and old lady Abby (Mary Larkin) to cross over to the other side, as the ultimate adventure. To kill themselves. Abby laughs him off. 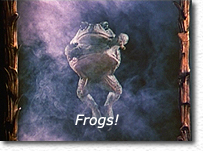 It seems that Tom has his reasons for wanting their deaths to happen. Tom's mother Mrs. Sanders (Beryl Reid) is a devotee of black magic. Through being around his mother and sinister Butler Shadwell (played by cinema stalwart George Sanders), Tom's learnt that there is a way to come back from the dead. Through some kind of mysterious frog ceremony - Mrs. Sanders keeps a frog in a jar and they seem to place importance on a frog talisman - Mrs. Sanders believes a recent suicide can be brought back from the dead, if they kill themselves purely with the desire to return. After much persuasion by her ambitious son, Mrs. Sanders agrees to let Tom go through the ceremony. After donning the frog necklace, Tom is locked in a room and undergoes a vision of floating frogs, himself as a baby, with his mother meeting a dark stranger in a cemetary. A mysterious deal is struck with the dark one, Tom returns to the present and passes out.

Back with his gang, Tom is imbued with a new confidence. He convinces the rest of them to go on a wild ride and trash the local town. They proceed to roar into the little place to chase ladies with prams, knock over shopping trollies and commit other similar atrocities. The police give chase after the entire gang, but eventually Tom and Abby seperate from the rest of them. Tom horrifies Abby by actually going through with the suicide he's been threatening, by riding off a bridge. Later, the grieving Abby is surprised by Mrs. Sanders's nonchalance at what's happened to her son. Still, Abby asks if they can bury Tom according to the 'biker' way, and Mrs. Sanders and Shadwell agree. The Living Dead bury Tom upright on his bike in an open grave, while one of the hippy-looking bikers strums a guitar, and sings a folk song about how the system destroyed their friend. They throw flowers in as Shadwell turns up in a Rolls-Royce, and asks if he can throw the frog pendant in. They agree. Shadwell leaves, seemingly satisfied. Later, when everyone is gone, Tom explodes out of his grave on his bike in a pretty impressive scene. He claims his first victim, a hapless villager whose car's broken down near the cemetary. Later we see Tom rob some petrol and kill the gas station owner with his newly gained super-strength. The only letdown here is that Tom looks perfectly healthy, there's not a hint of zombie-ness to him. I guess the magic worked so that Tom rose from the grave exactly as he'd lived, but even a blue 'Dawn-of-the-Dead'-like sheen on his skin would have been nice. 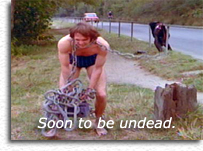 After calling his relieved mother to say he'll see her soon, Tom then bloodlessly slaughters a group who try to stop him killing a girl who'd earlier tried to seduce him in a pub. A detective is on the case, but can find no leads. His face obscured by a skull-helmet, Tom returns to the gang, who at first think he's an imposter, whom they'd heard was doing the local killings dressed as a Living Dead. One of the more headstrong members tries to stab this 'imposter', who reveals himself to really be Tom. The knife has no effect whatsoever. The newly revived leader explains to the incredulous gang how he did it. Jane (Anne Michelle), a female gang member, wants to try it, as well as another male biker. Tom leads them into staging a crash with a truck, where they're both killed. After their funerals, Jane revives because she truly wanted to die to come back, but the other guy dies because he felt fear right at the end. Tom and Jane go on a rampage, causing a truck to crash and explode. They then scare Abby, with Jane pretending to hang herself. Now Tom is putting the pressure on Abby to kill herself, and join him on his undead romps. The detective puts the whole gang in jail, but Tom and Jane come and break them out, killing all the police in the place- again bloodlessly. The rest of the gang kill themselves in various semi-comic ways - one loading himself down with weights and throwing himself in a lake, one jumping off a building just to annoy a police officer, and another throwing himself off a roadway into oncoming traffic. Finally, only Abby is left, and she's finally convinced to kill herself by the persistent Tom. Taking an overdose of pills, she has a dream about sinister frogs and being attacked by a double of herself in a nurse's outfit. Abby hasn't taken enough of a killing dose though, and is relieved when she wakes up alive. The detective wants to talk to her though, and use her to lure Tom out of hiding. Realizing how evil Tom and his 'Living Dead' have become, she reluctantly agrees. 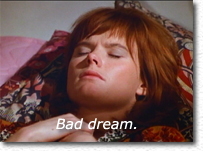 Tom visits his mother, and Shadwell and Mrs. Sanders also realise how corrupted by power he's become, with Tom delighting in all the people he professes he's going to kill. She tells Shadwell to reverse the spell, no matter the sacrifice. Shadwell asks if she truly realizes what will happen to her if he proceeds. Mrs. Sanders does, and commands him to go ahead with it. Meanwhile, Abby rejoins the living dead, as they go on a rampage through a supermarket, knocking over more shopping trolleys and causing more mayhem, pretending to have successfully killed herself and risen again. Soon Tom is wise to the deception, and tries to force her to kill herself. As Mrs. Sanders's spell proceeds, Abby's life is in danger withTom getting more and more furious and turning on her. What will be the consequence for the undead bikers, Abby and Mrs. Sanders if the bizarre ritual works?

While I'm not usually one to unload negatively on a given film, I do feel that Psychomania misses a number of golden opportunities. This is an evil undead biker film from the seventies, folks. Let your mind visualise the possibilities. Yet, virtually none of them are realised. The bikers, once risen from the grave, look and behave exactly the same as they did when they were alive - they're just stronger. The biker rampages consist of chasing shrieking ladies with prams and shopping trolleys. There is no blood, gore or even on-screen killings. There's also no sex, nudity or even a hint of sexual activity. No profanity. The bikes are under-powered wimps of machines. The only good thing about the look of the film is the gang's skull-helmets. They are pretty cool, I'll give them that. The performances are all adequate, but nothing that will hit you in the face. Nicky Stewart as Tom is quite handsomely decadent as the black magic-using gang leader. Beryl Reid as the mother mainly looks worried and concerned in her few appearances, and George Sanders as the Butler is effectively creepy on a couple of occasions. Mary Larkin as Abby is fairly insipid, we don't get a lot of intensity from her at any stage of her character arc - when she's a 'rampaging' biker she's as much a little lost girl as when she realises she doesn't want to be a part of a zombie biker gang. The climactic end transformation, of which I won't reveal too much, is quite a letdown in the special effects department - even the Universal horror movies of the nineteen-thirties used dissolves better in their creature transformations. 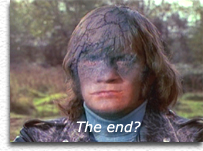 I still think Psychomania is worth a view, though. The music's atmospheric and actually reasonably creepy. I enjoyed the biker-funeral-folk-song interlude just 'cause I'm an old folkie. The scene of Tom bursting out of his grave on his motorbike is pretty darned impressive. The black-magic frog imagery is quite interesting, from a visual point of view. I haven't seen frogs used as an image of fright other than in the seventies classic, Frogs! Just the general concept warrants some attention, but I wish what I pictured in my head for this film had made it to the screen. View with an open mind, and with no expectations of much blood, thunder or exploitatative elements.