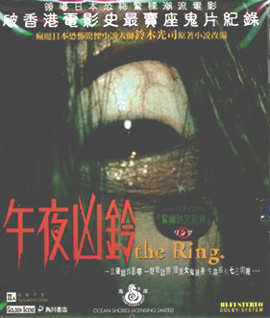 I had high hopes for Ring, perhaps too high. If you believe three quarters of the reviews out there on the 'net or wherever, this film is the most terrifying experience of all time. Well, I'm afraid it didn't attain that distinction for me, even though I did enjoy watching it nonetheless.

The Japanese are putting out a series of horror films to rival anything made elsewhere - be it the humorous "Wild zero" or the more serious supernatural/serial killer horror of "Another Heaven". "Ring" is probably the best I've seen so far, but it's not a personal favourite like the delirious Wild Zero. I'd strongly recommend any fan of horror, or alternative genres to take a look into what's been made in Japan in the last few years. I don't know if I'll ever get to look at a "Guinea Pig" atrocity film or any of the more extreme sickos that the Japanese are great at, but one day, who knows?

"Ring" unfolds slowly as a young female reporter watches a cursed videotape, and as soon as you watch this tape your phone rings, and a voice tells you, you have a week to live. A group of teenagers had done this and all perished - through no apparent means, it just seemed like they were scared to death. Well, it happened to the reporter, and she enlists her ex-husband to help her solve the curse and perhaps break it. I found the fact that they all instantly believed the supernatural elements a bit weak, but what can you do?

During the course of the slowly-counting-down-week, her young son also watches the evil video and so there's even more impetus to solve the horror. Soon we are propelled into a series of clairvoyant flashbacks - both the journalist and her ex-husband seem to be able to read minds - which explains the ghost behind the tape. It's a little girl who when alive, could kill with her mind. Her father pushed her down a well to her death, and when they finally discover the body (the women gestures to comfort the corpse) it seems that the horror is resolved, with the cadaver resting in peace. But is it, really? I won't spoil the ending like I often do with older films, as this one still needs to be seen by a lot of people.

Ring offers some excellent occasional Frisson through its sound qualities, with muffled horror and malevolent music coming through at key moments. There's barely-hinted-at horrors on the videotape - it's a degenerated image which adds to the creep factor - and the final scenes of the ghost-girl creeping out of the television, with a sort of twisted stagger, are actually quite creepy. Her face is covered in matted, long hair but we do, at one point, see a crazed, hideous looking eye. Her hands are also mutilated, from trying climb out of the well. She's worth waiting for, as far as a horror icon goes. I can't really comment on any special acting but it's all taken seriously, and performances are adequate for this style of film.

There's two other sequels to this film that sound worth catching - including a prequel - and even a TV series, for God's sake. We won't even mention the inevitable Hollywood remake. Yeesh. Let's just say that Ring offers a lot, in the way of subtle horror. There's no real special effects or gore, to speak of. Turn out the lights, up the volume and be prepared for a few shivers and atmosphere. Just don't expect to be terrified out of your wits like I did, and you won't be disappointed.