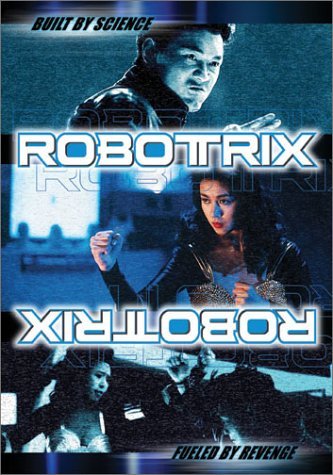 I have no idea if anything like these classic Category Three types of films are still being made in Hong Kong. Still, even if they were a passing phase that vanished as the mainland took over, boy, they're still worth a look these days. This one has exploitation elements in spades, and any self-respecting fan of cinema on the edge should take a look at Robotrix. You've got buxom cult icon Amy Yip for a start, who promises to show everything yet somehow reveals nothing, in the nicest possible way, of course. You've got sex scenes and nudity with beautiful Asian women, plentiful gore, Hong Kong humour - if you're into that very basic, loud slapstick - and late eighties disco and keyboard music on the soundtrack! And you're not rushing out to buy the DVD?

In Hong Kong, policewoman Selina (Chikako Aoyama) is killed in the line of duty. She was assigned to protect the hedonistic son of a visiting Sheik, but as he bathed in front of her and her goofy officers with a bevy of naked women, a strange, leather-garbed man stormed the premises and shot her, then kidnapped him. Later, the wealthy Sheik receives a video from a mad, old Japanese scientist, Ryuichi Sakamoto. Sakamoto is an inventor of Robots. The Sheik was visiting a Robotics convention, and after a demonstration of the perfect fighting robot Eve, invented by Dr. Sara (Hiu-Dan Hui) and her assistant Anne (Amy Yip) the Shiek decided to go with Dr. Sara's designs to build his Robot army. Sakamoto, furious at his inventions being spurned, killed himself via hari-kari, and transferred his thoughts into a powerful Robot who looks human, and went off to kidnap the foreigner's son and demand that he use his designs. It was Sakamoto himself who was the giant leather figure that stole his son.

The police, in a panic as to how to deal with the situation, agree to work with Dr. Sara. They transfer Selina's thoughts into Eve, who has no real human features, and re-model her to look exactly like Selina. To all intents and purposes she is Selina, and her boyfriend Joe Chow (David Wu) is none the wiser. The now super-powered Selina will battle the evil Sakamoto along with Anne - who is also revealed to be a Robot - and peace will be restored. At first she's upset, but then thoughts of revenge spur her on, and she agrees. In the meantime, the robotic Sakamoto goes to a bar, picks up a prostitute after killing her pimp with one powerful blow, and has untiring sex with her. After she tries to break way after the unending session, he throws her out of a window and kills her. We hear in the news that more prostitutes are dying, and Anne, who wishes to learn the ways of humans, agrees to pose as a hooker to trap the killer. Various sexual shenangians ensue, with even one of the comical police team's members vying for a session with her. Amy Yip, in typical non-revealing style, doesn't actually show any nudity clearly, but we get the hint. In the end, the killer doesn't show.

Selina and Joe consummate their love in a very glossy, slow sex scene. Cue the romantic electro-keyboard music. It's a lot of fun, folks - this film has dated quickly but retains all the charm required to keep viewers intrigued. The three women, Selina, Anne and Dr. Sara then take the police to a disco, trying to lure Sakamoto out again with their alluring selves. This time he does come out, and a shoot-out takes place. Some bystanders die, but Sakamoto escapes again, and kills a police informer who was going to report him. Dr. Sara pretends to be injured and lure him to a hospital, where he hurls a huge knive straight through a police guard's throat to gore-filled effect. After briefly being trapped in an electric cage, he escapes again. Tracking him to a quarry, the two cybernetic heroines fight him again, this time ripping his arm off, but Anne's leg is damaged as well. Sakamoto escapes the scene, and Anne is revealed as the robot she is to Joe. Selina then admits her new nature to Joe, who's taken aback and rejects her advances.

After they manage to subdue Sakamoto with thousands of bullets in a police trap, they remove his head and return to Dr. Sara's laboratory. With electrical stimulus, they're about to force him to reveal the whereabouts of the shiek's son when, after turning their backs on him, he re-attaches his head and attacks Dr. Sara. Next time we see her she's naked, so we assume she's been raped. Selina is wounded by a giant drill by Sakamoto and de-activated, but Joe and Anne give chase. Tracking him to a metal dump, they find the wounded shiek's son and all three give battle with the robot, fighting with a giant magnet on a crane and ever-present crushing machine. The evil Sakamoto is finally crushed by a giant steel container dropped by Joe, Anne and the young Sheik. Finally, with the deadly Cyborg destroyed, Selina is repaired and her memory of recent events wiped. It will be up to Joe to tell her one day her true mechanical nature, if he wishes. Happiness can now be theirs.

Probably this plot summary sounds a bit grim at times, but most of this film is played out as broad comedy. Anne is constantly being ogled by lascivious males, who practically drool at the sight of her. The bumbling police officers all go to water when she enters a room. The gore level is strong in this film, with Sakamoto's killings generally punching through people to destructive, bloody effect. Lots of rubberneckers get blown away by gunfire too. There's plenty of kung fu battles, and quite a bit of "wire work" as the combatants leap around on their super-powered limbs. Good old Amy Yip even gets to take it to our big bad villain, in a tight silver and black robot suit. To cap it all off, the storyline is even a bit romantic, with Selina and Joe's resurrected romance figuring throughout. The acting is all on a basic level, but it's pure entertainment we're talking about, not Shakespeare. The cinematography is pleasing to the eye, very glossy and I'm sure it looks wonderful on DVD, as opposed to the VHS version I viewed. I've already written about the soundtrack, but the disco music certainly adds to the nice time-capsule effect of this little epic from 1991.

If you like cinematic weirdness from the golden age of Hong Kong action, science fiction, horror and sex films, then Robotrix could be the film for you. It contains elements of all of the above in a very appealing package. Come on, do it for Amy's sake ...