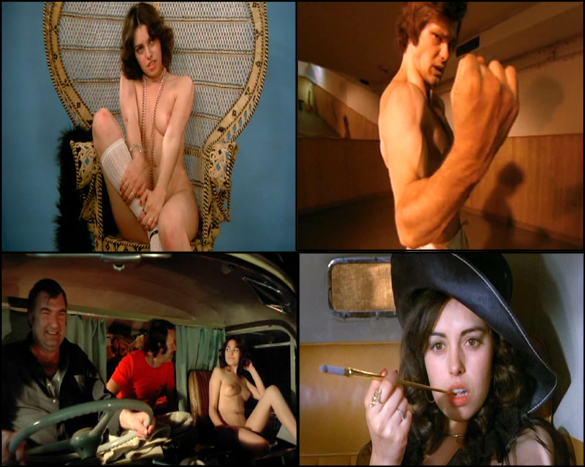 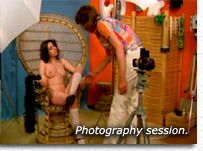 None of our characters seem to have names so we'll just go with the actors on display. After some footage of the title Rolls-Royce driving along a country road and parking near a huge mansion, we meet our heroine Lina. She's ecstatically shaving her pubic hair off, and her internal monologue says she wants to look like a little girl, so men will be attracted to her virgin-like appearance. We then watch her masturbate, the first of many such scenes! Lina is a highly paid nude model and pornographic actress, and we then watch her do a photo shoot with her personal photographer. Lots of naked poses in an Emmanuelle-type chair, then the two become intimate, after pouring handfuls of sand over each others nether-regions. Hmm ... 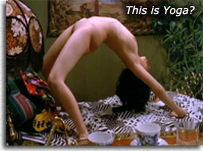 The photographer isn't Lina's only lover, though. Soon we meet Eric Falk, through scenes of him doing sweaty kung-fu into the camera - somethings with pants on, sometimes nude. Who knows what director Dietrich was thinking, but it's fun. Lina likes him though, and after the two dine at her mansion, he explains about how fit he is through Kung Fu and exercise. Lina says the only exercise she does is Yoga, and proceed to remove her flimsy negligee and do a nude version of her routine. This arouses Eric no end, and he proceeds to orally pleasure Lina into a frenzy. The two decide to stay together, and after the wealthy Lina mentions she has a Rolls-Royce, Eric offers to be her full-time chauffeur and drive her around to find the erotic fulfillment she endlessy craves.

You see, it appears that Lina's nymphomania stems from a bizarre incident in her past. As a dirt-poor hitchhiker, Lina was picked up by two truckers. As payment, Lina took turns having sex with the two men - and as we see she initiates this behaviour so she could have been insatiable even back then. Still, after having their way with her, they dump her on the highway without any clothes. Humiliated, Lina went on to use sex to make a fortune, hence the trappings of wealth she surrounds herself with. Now, she wants to be the owner of the car and be in control of any picked-up lovers. In a costume of broad-rimmed hat, cigarette-in-a-holder and flimsy lingerie, Lina travels in the back as Eric drives in his chauffeur suit, the couple playing out their fantasies. 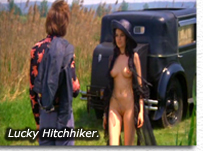 Lina and Eric start to drive around the green lanes of Switzerland in the impressive car, and their adventures begin. They pick up three men. Each scenario plays out like this. Lina and Eric drive along, Lina looking wistfully as she smokes her cigarette. They spot a hitchhiker and Lina calls out 'stop!'. Eric leaves the car, opens the back door for the man, and shoves him roughly in. Lina looks at his lustfully with her commando-style display and spread legs. Each hitchiker instantly pounces on Lina and the inevitable softcore sex ensues. One of her conquests seems to be younger and they do it outdoors, but this is the only variation. In the meantime we see another naked shoot between Lina and her photographer, this time it's on a motorbike - Dietrich seems to have a machine fetish going on here - but soon enough we're back in the Rolls for another adventure. 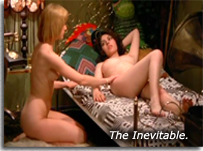 Eventually, Lina and Eric pick up a young woman, although initially they think it's a man. After the obligatory shove into the Rolls, Lina's startled to see a sapphic opportunity come her way! Of course, the woman instantly responds and the two begin their frolicking. Lots of nipple-sucking and tongue-kissing takes place, with Lina looking slightly uncomfortable but still a good sport - the two girls virtually laugh their way through it. Afterwards Lina's actually taken this girl back to her house, so there must be some genuine feeling between them. After some more sisterly action, Eric enters the room, removes his uniform and joins the pair in a threesome. After the woman watches Eric and Lina for a while, rocking in a chair, we cut to a new scene. Eric asks if the woman is going to stay. Lina replies that's she's gone. Eric is thrilled when Lina tells him new adventures beckon for the two of them and the Rolls-Royce ...

Well folks, that's basically it for our plot! No matter, these films are what they are, we don't need convoluted storylines for this type of cinema. The question is, is it effective given the parameters of this genre? Well, yes and no. Rolls-Royce Baby looks great, with loving care in the photography, particular the titular car and the verdant landscapes. We often focus on flowers and garden settings, as well as the chrome of the Rolls and the motorbike. The music's an insistent but appropriate plonking piano theme for 'Lina' that we hear. It's not grating in the least. Acting-wise, there's no real requirements here. So, no dissapointments there, I just question how truly erotic Lina is in this picture. Her poses for the photographer are so quick and jerky that any real sensuousness is lost. A lot of her impressions of being in the throes of ecstacy are opening her mouth as wide as it can go, which can get a bit tiresome. Her constantly naked body's quite appealing, but I think Jesus Franco could have adapted this film into a more compelling piece. We may have understood Lina's internal life a bit better with his approach. With Dietrich at the helm we have no real understanding of what made Lina an insatiable nymphomaniac, as she already seemed to be one before the truck 'incident'. Still, I quite liked her eventual 'Rolls-Royce' costume with the hat, cloak and cigarette holder.

Despite my slight doubts on Lina's sexiness throughout, Dietrich has some nice, if odd, touches for us to view. Eric's Kung Fu enthusiasm. The sand-as-foreplay scene. Lina's Yoga. There's many more which would make a long list. It's this slightly oddball approach that clinches Rolls-Royce Baby as a worthwhile view. Perhaps not a classic of seventies erotica, but anyone interested in seeing as much as they can of Lina Romay will get what they asked for. With Jess Franco in charge it could have been a classic. As it is, it's an enjoyable if lightweight way to pass the time, if you're in the mood for some Euro-sinema.