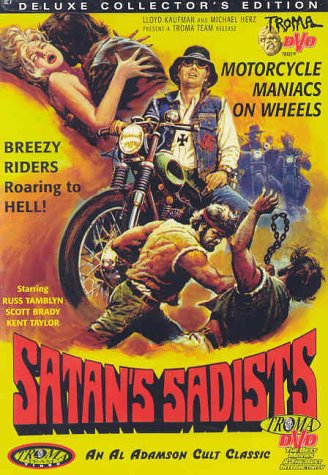 "Even when I was two, they all called me Satan..."

So the theme-music opens another classic from the Al Adamson pantheon. Satan's Sadists is certainly a worthy entry to the Biker movies section. I just hired this one from my local Melbourne video Library - much to my surprise. I think the first scene is cut where the dastardly Anchor and his crew murder and rape a couple and roll their car off a cliff - all we see is a car rolling down a cliff and Anchor and his cohorts sniggering away. However, I think I got the gist of the movie, enough to review it's charms on this site.

Anchor (Russ Tamblyn), Old Lady Gina (the bootylicious Regina Carroll) and his group of bikers form the outlaw gang called the Satans. These guys don't have many redeeming qualities. They exist to beat, kill and rape. They drop in at a roadside diner manned by Lew (Adamson regular Kent Taylor) and Tracy (Jacqueline Cole). Three other customers have also turned up - a middle aged policeman and his wife and a Vietnam Vet called Charlie played by Scott Brady. Soon trouble brews when the cop, his wife and Charlie try to defend Tracy from the unwanted attentions of the gang. The cop, his his wife and "Lew" are shot dead by Anchor - after she's been raped off-screen - after Anchor's made his famous speech about having long-haired friends that just like to smoke a little pot and get high, but get thrown in jail by dumb-ass cops. Blam! There ain't much compassion in this film, folks.

Charlie and Tracy escape after killing two of the Satans, fleeing into the desert. Anchor and his pals give chase, also encountering three young female geologists. Of course, the three young women are all soon raped and murdered after being fed stew spiked with LSD. Beforehand, Gina had ridden over a cliff, killing herself after being rejected cruelly too many times by Anchor, finally being punched in the stomach. We watch Gina riding at high speeds over the desert on her chopper as the bikers have sex with two of the drugged women. It's quite a scene, even though it's quite dark and hard to see what's going on.

Gradually, the tables are turned on the remaining bikers as they are killed by deadly snakebite, landslides and their own stupidity. Soon only Anchor is left to fight Charlie in a duel to the death - previously we thought he had been killed in a fight with Firewater (John "Bud" Cardos) a native American biker and the only one with any hint of a conscience. Firewater was the one killed in the rockslide.

If you have a taste for sex, violence, crazy dialogue, outlaw bikers and the films of Al Adamson, you can't really go past Satan's Sadists. Some people consider it the best biker movie ever made, some detest it. I'm somewhere in between, but it's undeniably entertaining. It's got a great sixties washed-out look to it, and the soundtrack is an absolute must. You'll have the theme song on your mind for weeks. You don't want to miss Regina's sexy dance in the diner. This woman can move. I'm considering getting the DVD to see just what I've missed - hopefully not much. It's all a fantasy of course, I've yet to see a film which I can imagine realistically depicts biker life. If anyone knows of one, please drop me a line. In the meantime, I'll pop Werewolves on Wheels into the VCR.

Do you thank that will be the realistic biker movie I'm chasing?