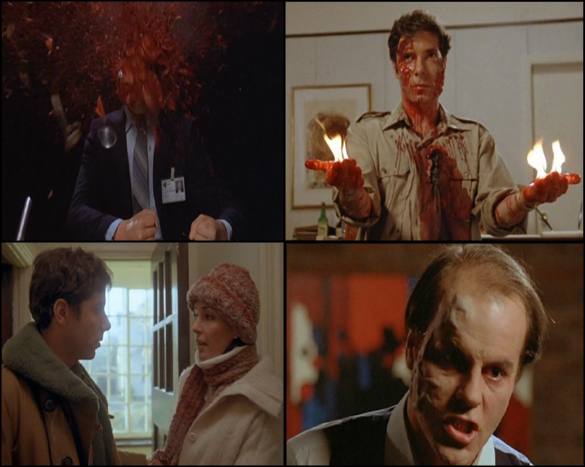 One of the most vivid images from the reading of my youth is that cover of horror film magazine Fangoria, number ten, 1981. The unforgettable exploding head from Scanners! Back in the day, it seemed like a new line in gore had been crossed by the master of venereal terror, David Cronenberg. Coupled with the makeup genius of Dick Smith, were new heights of visceral horror reached in this saga of telekinetic mind-wars? Well, I'm not sure about that, but we certainly have a unique and entertaining science-fiction thriller on our hands, which, for the die-hard gore-hound, impresses with a few amazing (and very bloody) set-pieces.

Scanners are essentially a new breed of people that have evolved by the start of the film. Equipped with tremendous powers of the mind, they can read minds, influence behaviour and kill with a thought, in various gruesome ways. Cameron Vale (Stephen Lack) is one of these people, however in addition Cameron is homeless and struggling to cope with the world and his powers, which overload him with people's thoughts. He survives by stealing food from people - who, under his influence, ignore him - in shopping centres. Cameron's life changes when he subconsciously attacks a middle aged woman who makes disparaging comments about him, sending her into convulsions. This draws the attention of 'Consec', a shadowy a weaponry and security systems company who use any means to advance their cause. Consec agents shoot tranquiliser darts into Vale and take him away. In the meantime Consec's only actual scanner member of their 'Scanner Program' is murdered (via that spectacular head explosion!) during a demonstration to board members by Daryl Revok (Michael Ironside), a rogue scanner who wants to convert all scanners to his cause of domination over the normals, or kill them. Revoks also kills several normal people as he makes his escape.

Vale is taken in by a Doctor Ruth (Patrick McGoohan) at Consec, who plans to convert him to the Consec cause, get him to infiltrate Revok's renegades, and bring them down. At the same time, a new head of security, Braedon Keller (Lawrence Dane), joins ConSec. Vale is convinced to join the mission when he's given an injection of 'ephemerol', a drug which suppresses scanner powers and frees him of the mental noise that constantly assails him. Vale's first step in his quest is to find Benjamin Pierce, a demented artist and scanner who tried to kill his family as a child. Vale goes to an exhibition of Pierce's bizarre and tortured work and obtains an address for him. Visiting Pierce - who sits in a giant sculpture of a human head to help him cope with his powers - Vale finds him uncooperative but before much progress can be made, Revok sends a group of assassins to kill any scanners who may oppose him. Pierce is shot to death but Vale, evidently a more powerful scanner, hurls them away with ease. Before Pierce dies, Vale scans his mind and obtains the locations of other scanners.

It appears there are other groups of scanners out there and one of them practices joining their powers into a communal mind. One of this group is Kim Obrist (the ridiculously beautiful Jennifer O'Neill) whom Vale met earlier at the gallery. Once again Revok's assassin's attack and kill all present except for Vale and Obrist who manage to escape. Vale infiltrates what is known as the 'Ripe Program' being run by Revok, which is shipping large quantities of ephemerol. He and Obrist return to ConSec to inform Ruth, however before they can the old man is killed by Keller, revealed to be a murderous double-agent in the employ of Revok. Vale and Obrist again escape by using their powers on the ConSec guards, rendering them unable to attack the pair. Vale then mentally infiltrates the Ripe Program computers through a payphone. Still trying to kill Vale, Keller orders a group of computer scientists to make the computer self-destruct as Vale is mentally plugged into it. Unfortunately for Keller, the enormous power channelled into the computers by Vale causes the laboratory to explode killing all inside including Keller.

The pair then visit a Dr. Frane, who has been prescribing Ephemerol to pregnant women as a sedative. Obrist is shocked when an unborn baby scans her through her mother's belly in the waiting room, causing her nose to bleed. After they leave they are ambushed by Revok's forces yet again, tranquilised and taken to the rogue leader's headquarters. Vale wakes up alone and facing Revok. Revok tells him the truth behind their powers. To begin with, they are brothers and Ruth was their father, who injected his pregnant wife with ephemerol - which not only nullifies scanner powers but creates them in unborn children. Revok, by mass-producing ephemerol, intends to create an army of scanners and take over the world. Revok invites Vale to join him but Vale refuses, enraging his brother by claiming he's becoming another Ruth. Vale hits him with a paperweight but Revok swiftly recovers, and begins a scanner assault on him. Vale puts up a good fight, causing veins to distend on Revok's face, but Revok appears to be the more powerful and causes blood to gush from veins all over Vale's body. Tearing his own flesh from his face, Vale appears beaten and close to death, but then mentally sets himself on fire. As an added measure, his eyes explode. Suddenly Revok screams, his eyes turn white and the scene ends.

Kim enters the room, and is shocked to find Vale's incinerated corpse. Yet, she still hears his mental voice and finds Revok cowering in a corner. Revok reveals himself to now have Vale's blue eyes, and the scar that Revok had between his eyes throughout the film - a leftover from trying to drill into his head as a psychotic young man - is now gone. Revok speaks with Vale's voice, with the words, "We've won, Kim."

For the most part, Scanners is a fairly low-key thriller. Effectively strange, but low-key. The look of the film is a muted, chilly winter which is probably the shooting conditions of the location, Canada. This does add a coldness of mood which aids the overall affect. The peformances are all fairly subdued and subtle. Except for the redoubtable Michael Ironside as the villainous Revok, who obviously relishes this role. Revok's a bombastic character, and a genuine threat with a bevy of facial tics and grimaces. Lack and O'Neill are fairly monotone as the lead pair, but carry the story forward well enough. Patrick McGoohan convinces as an eccentric scientist who would experiment on his own wife, and abandon his sons in the name of science. The story gets a little repetitive as the two scanners evade capture, are ambushed by assassins and escape again, but the film's strangeness makes up for it. The scanners can make you see visions, shoot yourself with your own gun, set you on fire or as obviously seen, explode your skull to fragments. So Cronenberg's scenes involving scanner power are all pretty compelling, especially the climactic showdown between Vale and Revok, where Dick Smith's 'bladder' work comes to the fore. You can literally see Revok's power surging through Vale's face as veins bulge and pop.

Scanners is an interesting step in Cronenberg's career. While not as gut-wrenching as Shivers or Rabid, or as all-out weird as Videodrome, it's a legitimate attempt at standard science fiction with the Cronenberg touch. It seems like a move in the direction of The Fly which really propelled him into the popular consciousness as a film-maker. If your're a lover of sci-fi you could do worse than give this one a look. And really, if you're any sort of fan of the horror genre or special effects in general, this one's a must-see just for Smith's elaborate physical effects - real objects undergoing changes before CGI took over, for better or worse.