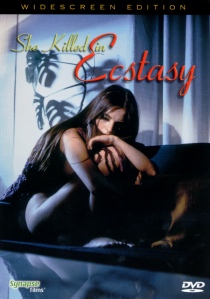 It's a pity Soledad Miranda was killed so early in her film career. Even though she's only appeared in a handful of movies, she does exude genuine presence in everything I've seen. At least there are a few Jesus Franco classics like this one and Vampiros Lesbos for us to enjoy.

Doctor Johnson and his wife (Miranda) enjoy a wonderful life together. He's researching the mixing of animal hormones in with human fetuses, to obtain a human species resistant to disease and injury. A Medical Committee take offense to the using of human embryos and strike him off the register. They also form a vigilante group and attack his laboratory, destroying his work and injuring his wife in the process. In despair, Johnson kills himself and leaves his wife to cope alone - which swiftly drives her insane for vengeance.

Adopting several different disguises, the women seduces all of the conspiritors and kills them savagely. The men involved (including Franco regular Howard Vernon and Franco himself as a particularly pathetic, whimpering victim) are all castrated. Finally, Mrs. Johnson meets her fate after her mission for vengeance.

You need to be of a certain cinematic taste to enjoy a film like this. Count me in this category. Franco's films are usually no - as opposed to low - budget and it shows. Barely any sets are used and it's all shot on location. Certainly interesting spots are utilized, bizarre houses and hills on European beachside settings. None of the murders, in terms of makeup effects, are very convincing but the actors try hard to put emotion behind them, and that's enough. There's certainly a seventies feel to the decor, one scene has this seventies fan drooling to own the room and furniture. I just love black and white leopard-skin, baby. The music also has to be heard to be believed, so of its time that it's almost alien now. I don't have the musical knowledge to describe it, just enjoy.

The narrative is basically one near-naked murder after another - there aren't many convolutions to follow. Within this structure, however, Miranda's performance is quite impressive. She really imparts to the viewer a feeling of absolute grief and despair. There's one scene where she's just curled up near the body of her husband and grieving which is particularly moving, the result of which is she's hard to see as anything other than the heroine of the piece. None of the victims are particularly sympathetic.

I'd recommend this one on a few levels, but if the basic scenario of death, murder and madness doesn't entice, then give it a miss. Franco films are certainly an acquired taste for the general public but for fans of extreme and weird cinema, he certainly blazed a trail amongst his peers, and under often very difficult circumstances. Worth a view just to see Soledad Miranda at her best.