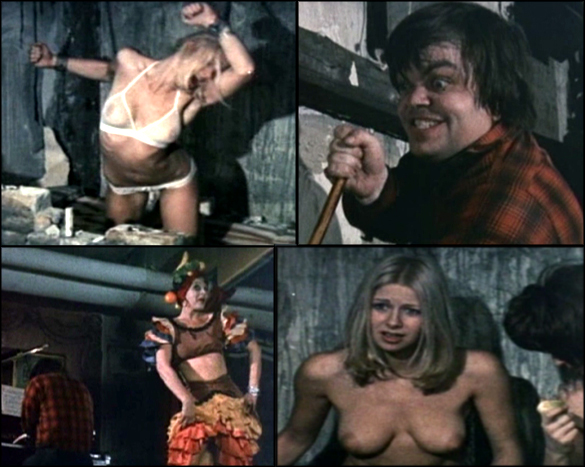 It's a funny thing when a seedy, sleazy, violent piece of exploitation cinema can be a pleasant surprise, isn't it? Yet, to a reviewer that's viewed dozens of films that could bear these descriptions, that's just what the bizarre The Sinful Dwarf is. A Danish/American co-production, this little piece of perverted film is a one of a kind. I can't imagine anyone who watches Torben Bille as Olaf the Dwarf, getting up to his sweaty evil-doings will ever forget him. I was kind of expecting an on-screen barrage of violence, gore and sex a la Ilsa, She Wolf of the SS or Bloodsucking Freaks. This, in it's own way, is actually a slower, classier production with a bit more poetry and thought put into the proceedings, all perspectives maintained. 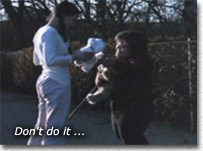 In a pre-credit sequence, a teenage girl - at least that's what's she's meant to be, with pigtails in - plays hopscotch and is approached by a sinister looking dwarf with a walking stick. This is our main protagonist, of course, Olaf. Olaf entrances the girl with a wind-up toy dog on a leash. Somehow, he convinces her to go into his attic to see more of the amazing toys he claims to have. No sooner does the rather simple-seeming girl go into the darkened room, bending down to look at some more toys, than with an evil grin, Olaf's walking stick comes crashing down on her head. Director Vidal Raski then runs some strange credits with windup toys doing their thing as eerie music plays. We get a glimpse of the hell to come as we see the same girl naked, looking utterly drugged out, as another girl screams and another washed-out naked woman looks on. 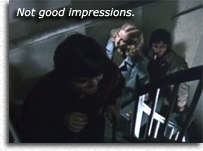 Young newlyweds Peter (Tony Eades) and Mary (Ann Sparrow) have arrived at Lila Lash's boarding house in London after a struggle to find a place to live. Peter's a struggling writer with no job, and Ann's a stay at 'home' wife who supports his struggle, the result being they're cash-strapped. They both think Lash's boarding house is the bottom of the barrel but are willing to give it a try until things improve, which the optimistic Peter keeps insisting will happen. When the scar-faced Lila (Clara Keller) agrees to show them her last room, she instructs her son, Olaf to show them. Mary is freaked out but the little fellow's weird manner and the way he bounces around on the bed, cackling with delight in how soft it is. Reservations aside, they take the room. A drunken Lila tells Olaf they can use her later. In a sensuous scene Peter and Mary make love, and we realise just how beautiful the slender, yet bountiful, Ann Sparrow is. Of course, the snickering Olaf is watching it all very excitedly through a peephole. Later he goes to the attic and retrieves a syringe. After Peter leaves to look for work, Mary, looking gloriously bra-less in a tight skivvy, goes exploring the cobwebbed rooms, when she hears strange bumping sounds. The film is almost David Lynchian in it's use of echoing whooshes when Mary goes snooping around. She doesn't find the attic-prison with three naked girls in it, though. Olaf goes through the hidden, barred door into the scene of degradation. Begging for heroin, lying around on filthy mattresses, are he and his mother's prisoners. Olaf shoots up the one that needs it the most and leaves.

Lila reminisces with another old woman-friend about the past, before the fire that ruined her dance-hall, and scarred her face. Before Olaf came along. We understand what the three naked women are kept for when Olaf shows a customer in. When you've finished your business, you ring a bell and the evil little man lets you out. Mary prepares a nice meal for her husband, despite their limited resources. Half-weirded out and half-amused, they listen to the drunken Lila do her best Carmen Miranda impersonation - in costume - to her drunken friend as Olaf plays the piano. Meanwhile one of the unfortunate women services a client in a brief scene. It's these odd touches that makes the film the little gem I believe it to be. The man has sex with the girl we meet back at the start of the film, and although she resists initially, seems to respond sexually to him, perhaps in her heroin-haze. More likely though, an extended consensual sex scene is what the raincoat wearers in the original audience required. Mary hears remnants of this activity in their bedroom and wants to investigate further. Lila enters the girls' cell and gives one of them a shot of heroin, slapping the brunette who is still fixated on the toy dog. Later she performs another cabaret number in top hat and tails as the blonde prisoner is strung up naked and whipped by an unseen assailant, as the others look on horrified. Mary cries as Peter has not returned home that night. Finally he turns up drunk and depressed from another rejection, clumsily trying to have sex with Mary as she tearfully refuses.

Desperate for work, Peter takes a menial job running errands for a toymaker known as Santa Clause (Werner Hedman). Santa Clause, ironically, is Lila and Olaf's drug dealer and smuggles heroin in the various toys he supplies. Lila has been pressuring him for more drugs to keep her sex slaves under control but he complains that it's getting harder and the police are closing in. Though they're initially happy Peter has some sort of work, Mary is sad to hear he's instantly been sent to Paris for a 'job' for a few days. Even more curious in his absence, Mary investigates the noises, and finally hears the women behind the barred door. They plead for help and she tells them she'll come back, only narrowly escaping a drunken Lila checking out what all the noise is. Meanwhile, Olaf picks up a teddy bear filled with drugs from Santa Clause. Later Mary goes back to help the prisoners, only this time she trips over a toy train which makes a huge noise and rouses Lila and Olaf, who promptly take her prisoner and through her screaming into the attic prisoner. They strip her to her underwear, chain her up with the others and laughing at her plight, leave her screaming. Lila types up a letter for Peter to find when he returns, faking a note that Mary couldn't take any more and left. 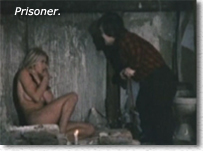 Peter returns and reads the note, scarcely believing it. Olaf, of course, feigns innocence. When Peter's gone he returns to the girls' room and gives a now-chained and nude Mary a shot of heroin to pacify her. When a new customer comes for the girls' services, he goes straight to Mary and feels her up a bit, but is disturbed by her drug stupor and ramblings about her husband. He goes on to one of the other girls and has sex with her in a fairly explicit scene. Mary begs him to help as he leaves and incurs the wrath of Olaf as he shows the man out. Later he returns and tortures Mary with his stick, seeming forcing it into her nether-regions off-screen, of which we see her agonised expressions. He then slobbers all over her breasts, as the camera closes in on his distorted features and crazed eyes. After the torment Olaf shows a new customer in who forces himself on Mary. I suspect this is a body double in this scene, as it's a pretty intense softcore sex-rape scene that the actress may not have wanted to take part in. Meanwhile the police net is closing on Santa Clause's drug operation, and after he and his cohorts are arrested, the search for Mary leads the police and Peter straight back to Lila Lash's. Peter and the police confront Lila in the hidden attic room, with Peter spotting his naked, tortured wife at last. He comforts Mary briefly, then realizes what has been done to her. A policeman offers him a gun to take revenge, and he shoots down one of his wife's two tormentors in cold blood. Olaf though, has been hiding in wait, and kills one of the policemen with his stick. Cornered by the authorities, with nowhere to turn, will the sinful dwarf plunge to his death from a high-story window, or make his escape and wreak more mayhem somewhere else? 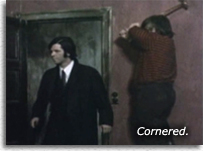 Surprisingly well-made, The Sinful Dwarf is a decidedly unique view as well. Director Raski's crafted a seedy little piece that has a nice, washed-out look to it. Everything is grubby and depressing, the girls' prison with its grimy mattresses and dirty walls emanating sheer misery. The whooshing soundscapes created for the film are intriguing as well, creating a disturbing atmosphere. The actors all seem to have a vague European accent, which is not unusual given it's Danish co-production background. They all try their best though, with Clara Keller as Lila Lash, Ann Sparrow as Mary and of course, Torben Bille as Olaf putting their all into it. Ms. Sparrow would have to have one of the most stunning bodies in history, and at least we get to see her experiencing some physical pleasure, as well as the degradations Olaf and Lash put her through. The film-makers make the most of Bille's features in a grotesque way, with extensive closeups of him sweating and drooling. He seems to almost relish being depicted as an outright monster. Olaf has no redeeming features whatsoever, with his thick accent and scratchy voice only adding to the creepiness of the character. Again, no reason is given for the hellish exploitation of the girls, only that Lila and Olaf are just plain mean and vile. As far as exploitation elements go, you'll get your fill here. The girls, though made up to look drugged-out, are still beautiful, naked all the time and all participate in various softcore coercive or semi-coercive sex scenes. And there's a lot of sex in this movie. Of course, what's a nasty little sexploitation film without a naked women hanging in chains, being whipped. Raski has almost all the boxes ticked for a certain type of cinema! The Sinful Dwarf is also quite unrelenting in it's downbeat tone. Having the police encourage Peter to shoot Lila Lash dead after discovering what's been done to Mary reflects this grimness. Olaf's final fate is also pretty graphically depicted, but I won't spoil it for you readers.

Does The Sinful Dwarf get a recommendation, then? If what I've described intrigues you, definitely track it down somewhere. This is a quality production, with significant production values, and care put into it. For such controversial material there's no rough edges here, no non-synch sound, wandering boom-mikes or people reading cue-cards. Even if your eyes glaze over with the sadistic sexual onslaught, there's still the odd touches of Lila and Olaf's weird musical interludes to hold your interest. I'd hesitate to invite your sensitive, feminist girlfriend (or boyfriend, whatever) over for a film-night with this as the main feature, though. You need to watch something like with a curious, dispassionate eye only, and a love for a cinematic style we'll never see the likes of again.