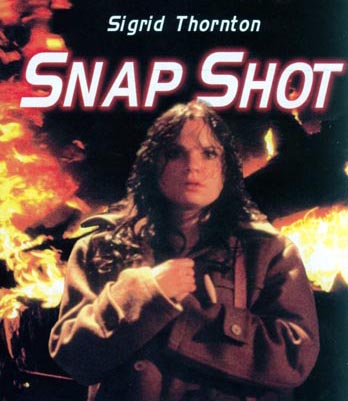 Well folks, this is review three in the Girls, Guns and Ghouls Australian series. As I've said a few times, I really want to have a significant section devoted to Australian cult movies because, well, I'm Australian, and I also believe they have a unique flavor that sets them apart from any other country's cinematic works. Hopefully in the course of the series I'll explore just what that flavor is.

So what's this one all about? Young Melbourne hairdresser Angela (Sigrid Thornton, well-known to us Aussies from TV series Seachange) is prised away from her dead-end job by her rich friend Madeline (Chantal Contouri). It's to do a photo shoot for weirdo photographer Linsey, played by ubiquitous cult actor Hugh Keays-Byrne. She's reluctant to go topless but gives in, in the end, for the beach-shoot for a particular cologne. She's horrified by the fact that the published advertisements show her face, but also proud in a sense. All she had ever known was life with a tyranical mother (Julia Blake from Patrick) and an unsatisfying relationship with unstable boyfriend Daryl (Vincent Gil) which has now ended, even though he seems to be following her in his ice-cream van. Yes, viewers, ice-cream vans can be sinister!

Eventually, Angela's mother's domineering ways get the better of her, and Angela moves into Linsey's communal beach pad. Circumstances, however, are becoming strange. Her dress is found torn to shreds. A pig's head is left in her bed. Is it her crazy mother? The unhinged, stalking Daryl? Is it even Madeline's sleazy film-producer husband, who had drunkenly tried to take photos of her topless again? Or is it even Madeline herself, who, in outing herself as a lesbian, tries to seduce the shocked Angela? I ain't telling who the stalker is...

And it isn't really that important. Director Simon Wincer has fashioned a cute little mystery, with a fair dose of humour indispersed. I'd struggle to call it a horror film - more a psychological mystery/character study with the occasional thrill here and there. It's atmospherically made, though, and Sigrid Thornton, whom I seem to remember hates this film in retrospect - does try hard to bring a serious emotion to her role. The other actors seem to have their tongues in their proverbial cheeks, but it doesn't really hurt the movie. We're not realy talking outstanding scripts here, either. Strictly functional enough to keep the plot moving along. Musically, the song about "Angela" by seminal Aussie band Sherbet will stay in your mind for weeks - just see if it doesn't. I don't mean it's a good song, though!

I guess I wouldn't strongly recommend this little piece to the average Girls, Guns and Ghoulser. Whacked-out schlock-junkies that we are, we just need stronger and stronger hits! Well, your old Uncle Boris does, anyway. And this one doesn't really have any strong content, vis-a-vis gore and sex (or anything), only brief flashes of intensity and quirkiness that make it reasonably interesting. What makes it uniquely Australian? Well, we're talking, as is often the case with Aussie content, low budget all the way. So the film-makers have to up the quirk factor to make a viable product out of it. Consequently, we get strange vignettes in clubs with bizarrely made-up cabaret singers, and an odd sense of humour running throughout. Maybe it's the humour in this one, the sense of no-one really taking it that seriously, that feels typically Antipodean.

Not a favorite, but something to take or leave, Cobber.