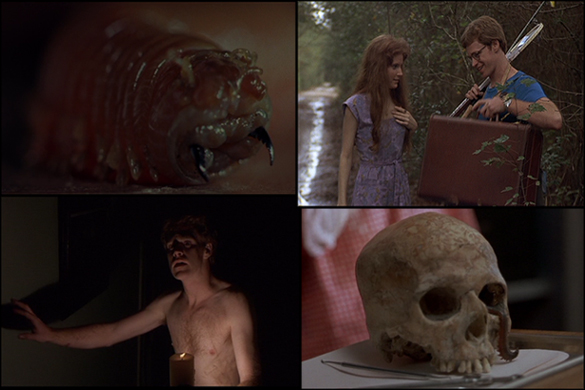 Of all the films out there with titles of one word, this one has to be one of the best. Writer and Director Jeff Lieberman, of Blue Sunshine fame, has crafted an enjoyable little horror film which pretty much covers all the bases of the genre, and leaves you satisfied with your squishy repast. Yes, with a title like Squirm you'd have to expect some sort of crawling, oozing protagonists, and this film delivers in bucketfuls. Of worms. Like, eww!

We start our squirming with a huge electrical storm, causing a giant powerline to come down in the seaside town of Fly Creek, Georgia. As the storm rages and people cower for shelter, we hear a child's nursery rhyme being sung, surely a required staple for any horror film worth it's salt. As the camera zooms towards the muddy ground of Willy's worm farm, we see a few of Squirm's worms. We're not talking cute little earthworms here, these are frightening looking creatures, with demonic little faces and pincer-like fangs. Of course, we get shrieking on the soundtrack to convey how nasty the slimy things are. If you've seen the cave scene in Peter Jackson's version of King Kong, and remember the giant brain-sucking worms the heroes faced, well, our little friends tonight are the small versions of them ...As a result of the storm, all the power and water to Fly Creek has been cut off. Nonetheless, Geri Sanders (petite redhead Patricia Pearcy) is waiting on her new boyfriend Mick (Don Scardino) to arrive from New York. Younger, plainer sister Alma is jealous and teases her about constantly talking about him. Their mother Naomi (Jean Sullivan) just wants Geri to get some ice from town before the food spoils in ther non-working fridge. Geri flutters her eyelashes at Roger (R.A. Dow), the simple neighbor who's obviously in love with Geri, and runs the worm-farm next door with his ageing father. Roger reluctantly agrees. Mick arrives by bus, gets dropped off near the swamp, and promptly falls in up to his waist. Geri turns up, and laughingly helps him out.

While Geri goes off to get the ice, Mick goes to a local diner and orders an 'egg-cream'. He annoys the locals when he reacts to the giant 'bloodworm' - the type Roger grows for bait - he finds in his drink. They think he did it as a prank, and arrogant sheriff Jim Reston (Peter MacLean) tells him to leave. He reunites with Geri and she drives him back to her home in Roger's truck. Mick wins over Alma and Naomi with his charm. Later, Roger approaches Geri in a state of distress. The worms - most of their stock - from the back of the truck have dissapeared, and Roger blames Geri's driving. Geri and Mick drive off. As Geri is an antique dealer, they want to pay a visit to a neighbour by the name of Beardsley, who has lots of junk to sell. After finding his house deserted, they're shocked to find a skeleton in the back yard. They get the sheriff, but find the skeleton is gone. Sheriff Jim tells Mick he never wants to see him around again. 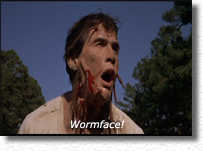 Geri and Mick run into Roger at a local bar, and convince him to go fishing with them. All is forgiven. It's all a ruse to get Roger distracted out on the water, as they suspect him of hiding the skeleton. The pair want to search his sheds and huts for the cadaver. Once out on the lake, Mick gets bitten nastily by one of the bait-worms. Roger tells them about how his father once tried using electricity to drive the worms out of the ground, and how it drove them insane and vicious - hence his thumb got bitten off. Mick leaves Geri and Roger together while he goes, he claims, for some first aid. Once back on shore, he looks in one of Roger's sheds and indeed finds the skeleton. Taking the skull, he runs into Alma outside. Meanwhile Roger, sensing an opportunity, makes a pass at Geri, but ends up toppling into the water. He rushes to the surface screaming, with worms burrowing hungrily into his face! He staggers to shore howling in pain, and disappears into the woods. Alma and Mick take the skull into town, and check it's dental records at the abandoned dentist's - and it turns out to be Beardsley.

Geri returns to Ma Sanders, but doesn't tell her about the events on the lake. She almosts takes a shower of worms as they begin to ooze out of the shower, but then is distracted and the worms retreat back into the shower-head. Mick and Alma return and Geri greets them in a semi-hysterical state after the 'worming' of Roger. Geri, Alma and Mick begin to realise what's been happening with the powerlines being down, sending electricity into the muddy ground all over town and creating angry, hungry, murderous worms. They drive out to Roger's farm and find his father dead, his stomach filled with ravenous worms. They race off to find the sheriff, who's chatting up a local woman in the cafe, and proceeds to rebuff them yet again. 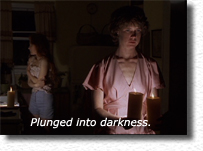 Returning home, they try to have a pleasant dinner and keep their mother ignorant of the growing horror. No sooner do they start, than a tree falls on their house! Talk about spoil your night ... Mick and Geri investigate, and find the roots have been eaten away by thousands of worms. Mick goes to grab some gasoline to burn them, but exposing them to the light makes them disappear. He goes off into the forest to get some wood to shore up the house, and is attacked by the now-crazed and worm-riddled Roger, who is still alive despite the earlier attack. Roger knocks him unconscious with a piece of door and leaves. Back at the house, Naomi is acting dazed by the whole situation but still, neither Geri or Alma tell her what's going on. As night falls, we see that the worms have filled the bath in their thousands. Naomi knits in a kind of trance. Alma walks upstairs with a candle, opens the bathroom door and millions of worms engulf her.

Mick eventually comes around, and goes off to help Geri and her family. He wraps his shirt around a stick and lights it on fire, to protect himself against rampaging worms. Meanwhile, the sheriff and his conquest, now in bed, are eaten by thousands of the things. The cafe and its customers are also swiftly dispatched by the evil creatures, and we get to see lots of close-ups of these genuinely frightening little critters! The Sanders household is now being taken over by worms, and they seem to cover every available surface. Mick, using his flaming torch, makes the now heaving-mass of worms part and breaks into the house, only to find what's left of Naomi being devoured. Fleeing in horror, he's attacked by the worm-faced Roger, who's got Geri tied up and suspended from the ceiling. He gets the better of Roger, and hurls him into the heaving mass of squirming invertebrates. Untying Geri, they try to escape out through the roof as the swarm of creatures gets higher and higher ... will anyone survive the onrushing mass of wriggling horror? 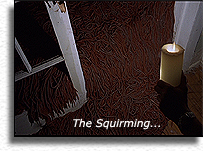 Lieberman has done some effective work here. While obviously not talking itself too seriously, neither does Squirm descend into camp. The blood-worms are absolutely horrific, and when joined with all the shrieking and screaming on the soundtrack when they are in close-up, become true images of horror. Makeup maestro Rick Baker contributes some great worm-eating effects, particularly the worms-burrowing-into-Roger's-face scene. The actual blood-gore quotient is quite low, but the excess of worms more than makes up for it. They must have used millions of the animals - or at least some sort of bloodworm 'substitutes' - as there appears to be countless creatures taking over the house in the closing minutes.

On the acting front, Patrica Pearcy and Don Scardino make appealing leads simply because they are more-or-less regular-looking people, not living toothpaste commercials. I adored Pearcy's heavy southern accent. Fran Higgins as Alma is plain but spunky as the younger sister, and I won't reveal her fate as there is a little surprise in store, in that regard. Jean Sullivan is all dreamy vagueness as Ma Sanders, I have no idea why her daughters didn't just tell her what's going on, which may have helped her survive the attack. R.A. Dow as Roger plays jealous hick well, then becomes progressively more wild and loony as he pops up like a worm-eaten jack-in-the-box, for successive shock moments.

The music supports some good shock moments at times, and the child's nursery rhyme is just wonderful at the start. At other times any music is barely noticeable. Those viewers looking out for the incidental - but required - nudity may be a bit dissapointed, but nicely-freckled Pearcy does show us a few split seconds of toplessness in the shower. Squirm is all about wormsploitation and not much else! The film takes a while to get going, but the last half-hour of wormery more than makes up for any slowness. Even the lead-up is enjoyable as we're often shown some nice Georgian scenery, the dynamics between the characters is fun to watch and the photography by Joseph Mangine is quite atmospheric.

All up, I can only recommend Squirm to horror and cult-cinema fans out there. Though the blood is minimal, the real little 'monsters' on display will burrow themselves into your mind, and leave a strong impression. The rest of the film is a well-made, easy-going character piece that eases you along nicely until the icky stuff shows up.