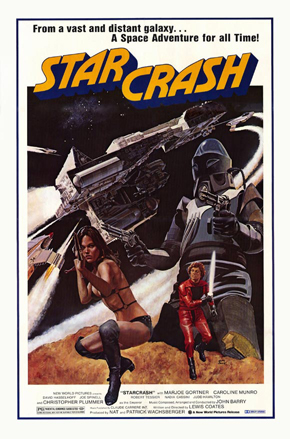 This one is a real treat. I love all cheap Italian knock-offs of major hollywood films. Films like Tentacles ripping off Jaws. Beyond the Door ripping off The Exorcist. Zombie Flesheaters ripping of Dawn of the Dead. The Italians do it sooo well! And half the time the imitators are more entertaining than the originals. So, it's in this spirit of enjoyment that I review Luigi Cozzi's Starcrash. You can't really go wrong with this one, my little lovelies, as it really has everything, except for sex and nudity. But, you can't have everything all the time.

So what does it have, and what am I raving about this time? Well, the main heroine, Stella Star, is played by Caroline Munro in mostly an intergalactic leather bikini. Caroline Munro was a famous poster girl from the seventies in England, and popped up in films like The Abominable Dr. Phibes and Dracula A.D. 1970. You've got Marjoe Gortner, cult actor who appeared in Earthquake and some other weirdies, Joe Spinnel of Maniac fame, a young-looking David Hassellhoff and even Christopher Plummer looking a bit bemused by it all! It's a Star Wars knock-off we have here folks, and a fun one. You could probably show this to your children, it's so innocuous. But that doesn't mean it's any less entertaining.

Stella Star and Acton (Gortner) are space smugglers on the run from intergalactic police, robot "L" and bald, green alien Thor (Robert Tessier). Stella is the pilot, Acton the navigator. Finally they're caught and Stella is thrown in a hard labour prison. She breaks out and blows it all to pieces, but is caught again. This time Acton and Stella's services are needed by the Emperor (Plummer) who's son is missing on a mission to stop the evil Count Zarth Arn (Spinnel) who shall from now on just be known as "The Count". That's all they call him in the movie, anyway. So, I don't know what the prison sequence was for, but now L and Thor join our heroes in their mission to rescue Simon (Hassellhoff) from the clutches of the evil Count, who has a doom machine which projects the "red monsters" into space and drives astronauts mad. He wants to destroy the Emperor and his armies, and rule in his place.

Stella and Acton agree, and landing on a planet of Amazons in their search for the Count, L and our Heroine are taken prisoner by the Amazon Queen, who is in league with the villain. At first, we believe L has been blasted to smithereens, but he comes back and rescues the grateful Stella. We are then treated to some Ray Harryhausen-style special effects as the Amazon Queen unleashes her giant robot statue to chase L and Stella - to no avail though, as Acton blasts the robot with the ship's lasers, deactivating it. They then continue their search on an ice planet, but Thor reveals himself as a traitor in league with the Count - believing he's killed Acton, he locks L and Stella out in the icy wastelands. Acton is not dead, however, and blows Thor away after a protracted (and hilarious) fight. Gortner's overacted facial expressions have to be seen to be believed.

Meanwhile, both frozen in the ice, L has kept Stella alive but holding her hand and passing his energies into her, keeping her heart beating. Thawed out by Acton, Stella and L continue their quest on a final planet, after being bombarded by the "red monsters" in their travels. The red monsters just look like the magnified contents of a lava-lamp to me, but they seem to upset Stella and L. Still they survive, and finally on the planet, L is attacked by cavemen and smashed to pieces, while Stella is carted off by the brutes. She's rescued by Simon who uses a mask with laser-eyes to fend off the cave-creatures. They all realize that they have finally found the Count's lair, and discover his "pre-programmed computers". The Count turns up, however and imprisons our heroes with his stop motion robots. He is going to blow up this planet, along with Stella, Acton and Simon with it. Acton takes on the robots with his light-sabre™, but dies from the fight, dissapearing into the electrical energy he seems to wield at certain moments in the film.

The Emperor appears and stops time with his giant space-ship. Yes, you heard me. Reunited with his son, he doesn't want to lose him again and they all escape the exploding planet. Marshalling their forces against the Count, it's time for the giant space battle to take place. This battle is Star Wars on the cheap, but still enjoyable with lots of model work and laser blasts. L makes a welcome reappearance as the Emperor has had him repaired. The battle with the Count is lost though, and it's time for the titular "Star Crash" - Stella and L are going to pilot an entire floating city into the Count's new planet and crash it, leaping away at the last possible moment. There's some hard science going on here, folks! Will good win out and our heroes survive this desperate measure? I think you can take a guess.

Please take a look at this one if you can, Ghoulies. You'll come away feeling good, I promise. Caroline Munro can't act, but as Stella Star she is an icon, looks spectacular, and is a fun presence with her overacting, enthusiastic ways. Actually, the overacting is the main appeal of the movie, you haven't lived until you've seen Joe Spinell as the Count. It's pure kid's pantomime, and wonderful for it. What an evil laugh! This villain has no redeeming features whatsoever!

This film is B-picture at it's purest - from the low-budget special effects and stop-motion, to the script to the acting. And hey, I think it's as enjoyable as Star Wars™. So sue me! This is one you can show any young girls or ghouls in the house, but still come away illuminated by a filmic gem.