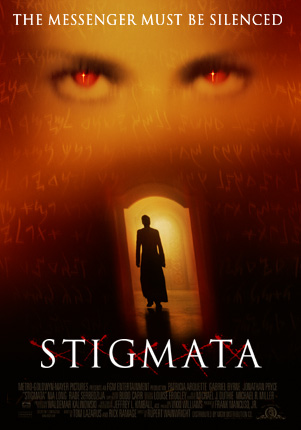 After watching Stigmata, I found myself a bit surprised at the end. It's not a twist ending or anything ... it's just a realization that there's no real villian throughout the film ... at least by hollywood standards. Sure, there's a misguided priest at the top of a conspiracy of silence, but his villainy is pretty small and he's only a threat for one short scene. I guess if you have to assign a villian it's the church itself, trying to conceal the secret that this film is all about.

I think the publicity campaign made out this film was an 'exorcist' clone, in an attempt to sell it to the masses. True, there's a possession in the story, which causes some gruesome moments, but it's not a demon doing it and the force behind it is quite sympathetic.

Frankie (well played by Patricia Arquette) is a hair dresser in America. She's a modern girl, does some clubs, drugs and booze. She's no saint, yet suddenly she's beset with the stigmata, the wounds that Christ suffered on the cross. First the holes in the wrist, then the feet, the lashings across the back, the crown of thorns ... will she suffer the ultimate spear into her body? Each wounding seems worse, threatening her life and her sanity. Nobody believes she's sane except one man, the investigating priest played by Gabriel Byrne. To be able to help her, he has to fight the papal authorities who want to divert him from discovering the gospel of St. Thomas, an unconfirmed document that reveals Christ's actual words and pushes away from an established church. Obviously a document which an established church does not want any part of.

I don't want to give the whole plot away. Not because of some huge secret, but I found it was interesting learning about some of the stuff on display. Stigmata could be accused of having an "MTV" look but I got into it. I loved the Billy Corgan soundtrack too - not overwhelming but very atmospheric. All in all, recommended, and a lot better than the Schwarzenneger Satanic opus released at the same time, "End of days".