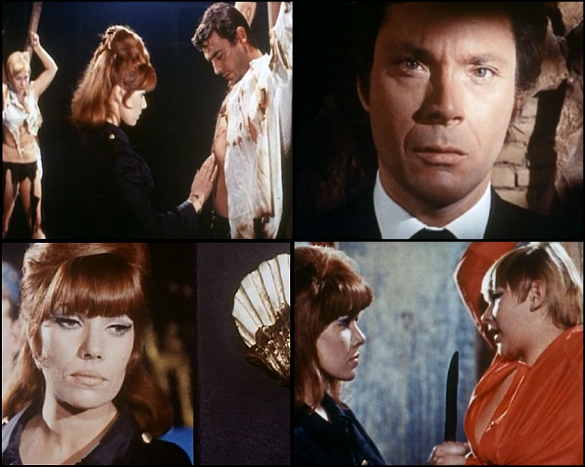 One of the more popular views on Spanish director Jesus Franco is that he was a talentless hack who rushed productions through on next-to-nothing budgets with minimal finesse. Well, I'd like to offer Succubus in Franco's defence. With a marvellously dreamlike atmosphere and a compelling presence in Janine Reynaud, this film's one of his best, if not the best. Let's see if I can entice you to watch the delerium and join the Franco fold. 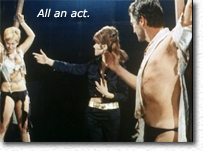 We jump straight into perverse strangeness as Lorna Green (Reynaud) approaches two bound, semi-clad victims, a male and a female. Lorna wields a short whip but never uses it. As Jazz music swells, she kills the girl with a knife and then seduces, then kills the man. All three bow and smile to the nightclub crowd as it was all an avante-garde act. During the act we see, superimposed over Lorna's face, the face of a man, Ralf Drawes (director Adrian Hoven) who claims that Lorna is his perfect companion, "A Devil on Earth." This enigmatic man will come and go throughout the film. More on him later. We rejoin Lorna and her boyfriend William Mulligan (Jack Taylor) backstage, wherein the slender beauty does a sassy strip for him, although he doesn't respond to her advances and eventually they both fall into a deep, frustrated sleep. Lorna awaken into a soft-focus dream state, and leaves William asleep, to don a robe and cross over a mysterious bridge. There she's greeted by black-robed monks, escorted to a car and driven to a castle. Upon entering the castle a strange man plays her a serenade on a piano. She disrobes, kisses her own reflection and dons a beautiful white dress. Reynaud is a striking-looking actress and wears a stylish gown exceedingly well. Leaving the castle again and driving off, she meets a man in a bar known as Admiral Kapp, played by the redoubtable Franco regular, Howard Vernon. As a naked bartender mixes cocktails, the two play bizarre word-association games, dance together and end up in bed. The word games begin anew and end with murder as Lorna drives a hatpin into the Admiral's face. 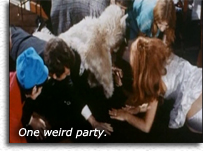 Lorna wakes up the following morning back into a hard-focus world, next to William with no memory of what had taken place. They go for a walk in town and find a funeral procession which strangely fascinates her. She goes into the chapel, wanting to look at the corpse. Removing it's veil, Lorna screams as she sees Admiral Kapp with a hatpin bloodily driven into his eye. Later, after recovering, Lorna and William join a bizarre party, which of course has a dwarf in attendance. One of the party-goers reads from a book as the other revellers, Lorna and William included, are given what appears to be sugar cubes, eaten over a mirror under their chins! The man reads on, describing a greek goddess who is actually a 'devil' among humans, feeding on them to satisfy her dark desires. As he reads, Lorna's features grow harsh and her makeup looks extremely heavy. In a drug-induced stupour, she crawls around on the floor as the other partygoers join her, barking like dogs as the midget dons a dog costume to lead the crowd. This is one weird party. William sobers up and drags Lorna away from the revels, slapping her in a jealous rage. We next see that they have made love, with apparently all forgiven. 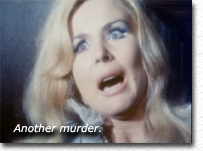 William and Lorna seem to renew their relationship, taking walks in parks and so forth. Still, he does tell her a strange story about a princess possessed by a devil who kills her prince. At a nightclub, the mysterious Ralf Drawes approaches the couple again, calling Lorna "The Countess". She tells him to go away, but he tells her to never forget who she is, and that he is "in control". Lorna and William argue after this encounter and he leaves. Lorna slips into her dream-world again, being interviewed about what monsters scare her, including Dracula, Frankenstein, Godzilla and finally Ralf Drawes. She finds them all "quite sweet", except for Drawes. On a cliff next to the castle, Lorna meets a blonde girl whom she takes back to her room. They play dress-ups ina room full of creepy-looking mannequins. They begin to kiss, but Lorna is again overtaken by the urge to kill. As mannequins come to life and walk toward the screaming girl, Lorna stabs her to death. She wakes up for real in the castle and find the dead girl. The confused woman quickly jumps in to a car and drives back to her normal life. 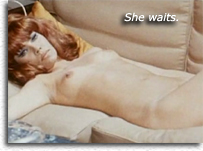 William drives around the city, pining for Lorna, hoping he can get over her as time heals his wound. No sooner does he return to his apartment than he find Lorna lying on the floor. He asks her how she got in, and she tells him enigmatically that she can get in anywhere, and get anything she wants. They drive off together, with William questioning the nature of their love, indeed love itself. Nonetheless, he's ecstatic that they're back together. Lorna promises to be his forever and stay with him "until the end." Sometime later, William meets up with Ralf Drawes as Lorna enters the nightclub alone. Ralf assures William that everything will be all right, that he will finally be free. William asks Ralf to come to his nightclub when he hears shouts. Meanwhile, Lorna finds the two actors from the first nightclub scene, tied up. William watches murderous urges overtake her again and though they beg her not to, Lorna kills them both with a knife, then awakens from her trance and flees the scene. Smoking a cigarette, William coolly inspects the scene and leaves. He returns to his apartment to find Lorna naked on a couch and waiting for him. Knowing it means certain death, the entranced man cannot resists and embraces her. She stabs him in the back of the neck.

Lorna joins Ralf, and he drives her to the castle. He promises her true peace and rest, and that he will guard her in her sleep. A voice-over, probably Ralf, tells us that Lorna is truly Faustine, the devil character from the book we have been hearing excerpts from all through the film.

With a literate script by Pier A. Caminnecci, Franco has provided a visual and aural feast with Succubus. As Lorna, Janine Reynaud is no doe-eyed seventeen-year old. I believe she was in her late thirties when playing this part, and although her body is slim and young-looking, there is experience and world-weariness in her unusual face. I can't really imagine anyone else in the part except perhaps for Soledad Miranda. The other actors acquit themselves well, with Hoven and Taylor playing the two men in her life with intensity and gusto. I enjoy Howard Vernon in any film and Succubus is no exception. Admiral Kapp gets a memorable death and his wordplay with Lorna is fun to behold. Franco explores the yearning for love, the attraction to oblivion and a loss of self in relationships. The logical extension of this is death at the hands of your lover. We're never really sure which is the dream-state, the real world inhabited by William and the nightclub, or the world presided over by Ralf. Eventually these worlds collide and merge, forming a new one where Lorna has no control and must kill in the 'real' world as a devil on Earth, where in the first scenes it was but an act. Franco's visuals are top-notch, be it the groovy nightclubs with their cool jazz and bizarre 'floor shows', or the blurred world of Lorna's dreams, peopled by living mannequins, mirrors and the ever present ocean. Of course, as with all Franco, music plays a large part and we switch from jazz to classical in a heartbeat. Script-wise we get quotes ranging from Spillane to De Sade when exploring Lorna's 'condition'. This is a film to listen to as well as watch.

For those of you requiring blood and nudity with your cult viewing, Succubus will go some way in satisfying your needs, if Franco's stylish production isn't enough. Reynaud often disrobes, although there's no outright sex scenes. There's a smattering of blood as Lorna kills her paramours, although you'd never call this a gore film. It's a mood piece, as unpredictable as Franco's jazz music, probably even following the same structure and flow. In the right frame of mind, you can allow Succubus to ascend the pantheon of classic cinema as a true and unusual gem. It's a pity Janine Reynaud didn't become more of a star, as she has a real presence and could have essayed all sorts of roles, sensual or otherwise. Nonetheless, she left a wonderful example of her abilities with Succubus and any anti-Francophiles should take a look at this film, hopefully balancing their opinion out with its mysteries and visual pleasures.