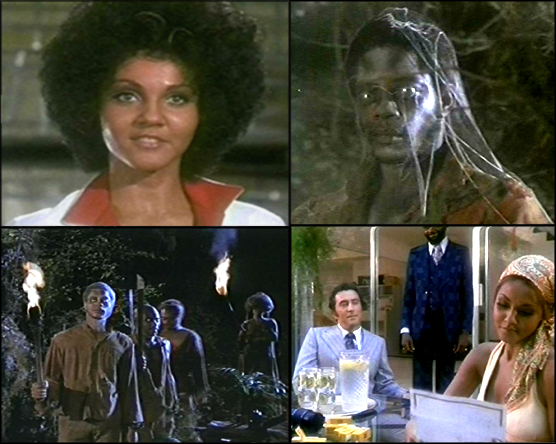 In the proud tradition of blaxploitation horror classics, Blacula, Blackenstein and Abby, I'm delighted to finally be able to review Paul Maslansky's Sugar Hill tonight. I've longed to see this one for years. We're talking traditional voodoo-spawned zombies in the thrall of the vengeful, Coffy-like heroine, Sugar, as played by the fair-skinned Marki Bey. Does Sugar Hill come up to scratch when compared to the cream of the blaxploitation epics? Well, all things considered it's an enjoyable little piece, perhaps pulling up a little short of the greats. Still, it's hard to go too far wrong when you co-star Robert Quarry from the seminal Count Yorga, Vampire as your main heavy. 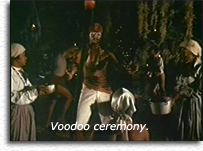 First, we see a voodoo ceremony taking place as the opening credits appear. After the sublime opening theme song, 'Supernatural Voodoo Woman' has faded away, we meet the beautiful Diane 'Sugar' Hill, who has a boyfriend she's ready to marry, Langston. Sugar's lover owns a voodoo-themed nightclub in the deep South, and with realistic voodoo entertainment like we've just seen, it's a successful club. That means trouble for Sugar and Langston, as local mobster, Morgan (Quarry) wants to buy Langston out on the cheap. Using 'Fabulous' (Charles Robinson), the local jive dude, as his enforcer, Morgan tries to lever Langston out. As Sugar looks on, Langston will have none of Fabulous and his henchman's veiled threats and asks them to leave the club. They seemingly comply peaceably, but after Langston bids the sceptical Sugar goodnight, they ambush him and brutally beat him to death. 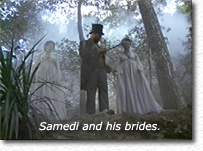 The grief-stricken Sugar's misery soon turns to vengeful hatred, and she wants all of Langston's killers dead. Through her contact with the voodoo performers, Sugar finds out she needs to approach Mama Maitresse, the local, one-hundred-year-old voodoo queen. Approaching a creepy old house in the bayou, she eventually coaxes 'Mama' (Zara Cully) out of hiding. After telling the old woman about her plight, finally Mama agrees to show Sugar the path to vengeance. After a ritual at a fog-shrouded cemetary near the bayou, the god of the dead, Baron Samedi (Don Pedro Colley, enjoying himself enormously) appears, with his two undead wives. He expects fear from Sugar but she shows him none. She asks him his price for revenge, offering the top-hatted spirit her soul. Samedi explains that souls are of no interest to him, and that they will settle later. Samedi agrees to offer his power, and calls up his army of the undead. Hands claw their way out of graves, and in an effective scene the zombies, formerly buried slaves, rise. They're an unusual-looking zombie horde, with silver, pupil-less eyes staring out of cobweb-strewn, slightly grinning faces. Though stunned by the appearance of the living dead, Sugar senses these ghouls are the key to revenge. 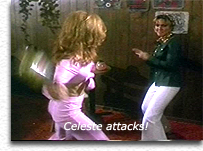 At the docks, one of Morgan's thugs is running his usual standover tactics on the dock workers. Later, in a cargo area, the thug sees Sugar in a stunning white-outfit, looking very Coffy-like, promising revenge on the 'Honk'. The goon laughs her off but the cobwebbed zombies, wielding machetes, appear from the darkness and soon despatch him, leaving one decapitated honkie. Lt. Valentine, (Richard Lawson) an old flame of Sugar's, is on the murder case and finds an old slave-manacle left at the scene. The forensics tell Valentine that the hand that killed the thug was composed of dead tissue, complete with mould. Later, the rattled Morgan gets another goon to find out who killed his henchman. He and his lover Celeste (Betty Anne Reese) receive Sugar's visit, pretending innocence of Langston's murder. Morgan makes Sugar an offer for the club that she's now inherited. Sugar stays cool and tells the mobster she'll 'think about it.' Celeste, racist honkie that she is, doesn't trust Sugar and gives her the cold shoulder. Sometime later, Celeste pays Sugar a visit at the club and ends up attacking her with a broken bottle, but the street-smart Sugar easily gets the better of her, and boots her out. Celeste swears revenge.

The hood that Morgan sent out to investigate the murder is lured into a taxi by Baron Samedi, posing as a taxi-driver working for Morgan. The 'taxi-driver' tells the hood that Morgan's waiting for him at a secluded place, and the crim reluctantly goes along with it. He meets Sugar at a pig-farm and as the vengeful heroine and Samedi laugh maniacally, the "Zombie Hit-Men" throw him into a pen of starving pigs. Valentine pays Sugar a visit but she fobs him off. Sugar and Samedi lure another goon into their den and as the zombies look on, use the black magic of a voodoo doll, to force him to stab himself to death. As he investigates the multiple murders, Valentine visits a magic expert and soon begins to assemble the clues - which all point to zombies and the supernatural being the culprits. More murders occur, with Samedi and Sugar in attendance and the herd of thugs is weeded down to almost nothing. Valentine interviews a priest who witnessed one of the killings, who describes the attackers as walking 'corpses'. He meets with Sugar again and asks to meet Mama Maitresse, the local voodoo expert. Sugar agrees and takes her old boyfriend to Mama. Mama takes one look at him and calls him a non-believer - then Samedi, in his guise as a worker on Mama's property, tells Valentine to leave. He obeys, but says he's got a hunch and he'll be back. 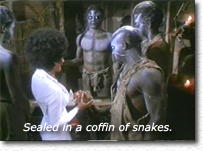 Morgan tries to win over Sugar again, and this time she seems to agree. With an extra ten thousand in cash she'll hand the club over to him. Morgan sends one of his remaining henchmen over with the cash, and after being frightened by a disembodied chicken leg that attacks him, the mobster is promptly set upon by zombies and sealed in a coffin filled with snakes! Sugar shows him what he can do with his money, by stuffing the cash in with the screaming man. Morgan tries to get to the bottom of things as he's now lost ten thousand smackers for nothing. His relations with Sugar hit an all-time low, and he tells the smug woman to get out of his pad. Fabulous makes his weekly visit to the local brothel, but Sugar's got there first and paid off the Madam. Now, as Fabulous lies naked on the bed on his chest, he complains that the various hands he's paid for are cold and unpleasant. We meet some female zombies this time! Exit Fabulous, stage left. Baron Samedi tells Sugar and Mama that Valentine's getting too close to finding out the truth. Sugars agrees to take him out of the picture, as long as he's not killed. With the help of a voodoo doll, Valentine pitches down some stairs and breaks his leg, but nothing more.

The now-furious Morgan calls Sugar and demands to see her. She agrees, and gets the mobster and Celeste to come to Mama Maitresses's eerie mansion. Morgan leaves Celeste in the car, and she's promptly attacked by window-smashing zombies. Morgan tries to confront Sugar but before he can do anything, is horrified to find his dead colleagues, now zombified and trying to kill him! Sugar, Mama and the Baron cackle with glee. After a cat leaps at him, he pitches out a window and into the bayou. Sugar, Mama and Baron Samedi follow. Morgan tries to shoot Samedi and the zombies, and of course the bullets do nothing. Morgan then tries to shoot Sugar, but has wasted all his bullets. Sugar announces her revenge is complete. Morgan flees the scene, but ends up quickly perishing in quicksand. Now the time has come for Samedi's payment. A soul is not required, but the Baron is something of a lady's man. And there is an obnoxious gangster's moll now being held captive by Sugar and her undead army ... 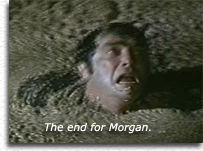 With virtually no blood, and a complete absence of sex and nudity, Sugar Hill's entertainment value lies mainly in it's atmosphere, which is pretty effective with it's fog-shrouded bayous and dark mansions. The music, other than the theme song, is not the funkariffic material that we can usually enjoy in these types of films, but at least we have our 'supernatural voodoo woman' by The Originals. The zombies are odd versions of the traditional walking corpses, with their silver eyes and cobwebs, but memorable nonetheless. Marki Bey as Sugar conveys her lust for vengeance well, unfortunately the script is not as catchy as some in the blaxploitation pantheon. You won't come away with many choice lines. It's mainly people calling each other 'honk' or 'boy'. I was amazed by Bey's hair, as in her revenge scenes she's sporting a Coffy-style afro, and in her 'civilian' scenes, her locks are long and loose. I guess she spent a lot of time at the hairdressers! She also fills a slinky white dress quite nicely - the fashions in this film are a treat for the eyes. Don Pedro Colley gives the role of Baron Samedi his all, with much gleeful cackling and eye-rolling. Robert Quarry's Morgan is fairly nondescript, but he does stand out as he gets more and more frustrated, sweaty and desperate. There does seem to be a genuine attempt by the film-makers to create a quality film - the production values are quite good and other than Samedi, it's all played straight. The last scene is a striking one and I guess I've hinted at it, but it does cap the film off quite nicely.

If you enjoy Blaxploitation cinema in general, I'd suggest a view of Sugar Hill. It's a nice addition to the horror subset of the genre, and even works quite well as a horror film in it's own right. See if you can track it down.