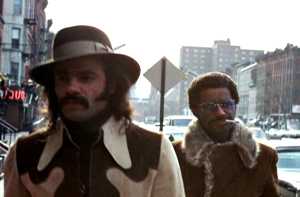 I love a good Blaxploitation film, and this little gem is one of the earliest, roughest-made and best. It's probably one of the few times where the soundtrack outsold the source film, but once you hear it you'll probably accept that it's true. Curtis Mayfield's funkadelic soundtrack just has to be one of the best ever put to vinyl. More on that later. Gordon Parks Junior's gritty urban work has none of the polish of other soulmates in the pantheon such as Shaft or Coffy - Superfly could almost pass as a home movie in some scenes.

Big-time Coke dealer Youngblood Priest (charismatic Ron O'Neal) is growing tired of the pusherman's life. His chase for two junkies that tried to rob him left him beating one of them up in an innocent and impoverished family's home, complete with crying, scared kids. His affair with a rich white woman Cynthia (Polly Niles) leaves him feeling empty, as he loves Georgia (Sheila Frazier), a decent black girl. He wants out of the life, and he has a plan. Deal thirty "keys" of coke in three months, and he'll be good for a million dollars and a new life of freedom away from the dealing, poverty and misery. He convinces his main partner, Eddie (super cool Carl Lee, pictured above with the behatted O'Neal) to get out with him and take half. Priest contacts his old mentor Scatter (Julius Harris) to obtain the coke. Scatter wants none of it, he wants to keep his life clean and just run his nightclub - where the Curtis Mayfield Experience just happen to be playing! I love the crowd scenes where the cool folk are bobbing around to Mayfield's music - I would kill to be able to transport myself into that scene and join them.

Something in Priest's pleadings and determination gets to Scatter, and he agrees to help. In the meantime, one of Priest's associates, Fat Freddie (Charles McGregor), forced into desperate measures to pay a debt to the angry Pusherman, robs a cop. Later he's arrested, roughed up by the corrupt police, and confesses to them about his boss. Freddie tries to escape, but is hit and killed by a car. The crooked cops then grab Youngblood and Eddie, and make them a deal - they'll supply the thirty keys, in order to be in on Priest's game. Priest and Eddie motion to agree, but Priest isn't too sure, later on. That night, Scatter turns up at Cynthia's apartment, in fear of his life. Now that the cops know about them all, they don't need Scatter as a middle man and are out to kill him - he knows too much. Scatter gives Priest all the information about the head bad cop, and flees, begging Priest to bring him twenty thousand dollars at the airport. Priest agrees, but Scatter never makes it and is bumped off by the cops.

The disgusted Priest meets up with some shady looking white folk and hands them some money. Later, he tries to talk sense with Eddie but he'll have none of it - he's now going to stay in the game and make enough money to live like a "Black Prince". Priest forces Eddie to put his money in a case and then he's going to get out for good. As Priest leaves, the greed-blinded Eddie calls the crooked cops and rats on him. In the meantime, Priest has swapped cases with his girl Georgia, in disguise as a bag lady. After a few minutes the cops grab him from his car, and the main cop on the take threatens him with death if he tries to leave. Priest calls him a motherfucker and a redneck faggot, and after beating up all the cops in slow-motion, Priest is halted by a gun pointed at his head. It's too late though - Priest has taken a contract out on this main honkie's head - if one hair on his "beautiful head" is harmed, the cop's whole family is history. Will this ploy enable our Pusherman hero to survive?

Superfly has it all, and hasn't a hypocritical moment in it's running time. There's enough slow scenes for drama hounds, enough action for those who need a thriller. The dialogue is superb ghetto argot, the fashions are to die for. You've got to see Priest's car - I don't know how to describe it other than dig those headlights. As I mentioned before, it's a roughly made film - the camerawork can be sloppy and grainy, the editing rough, yet somehow it all works. Even the credits look hand-drawn. As portrayed by Ron O'Neal, Youngblood Priest is a truly multi-dimensional character painted with shades of grey. Hardly a hero, he deals coke to his people, but wants pull himself out of the scene. When a group from the Black Nation of Islam confront him about his dealing ways, he tells them to leave and get some guns for his people - then he'll join them "killing Whitey". He can be ruthless to his "associates" such as Fat Freddie, and loving to his girl the next minute. Strangely, the soundtrack that Mayfield put together, to my mind, isn't used all that well in the film. Certain musical pieces are used over and over again in a repetitive way, calm, "nice" music is used when Scatter is killed. I guess I would have linked what Mayfield composed to different scenes - and used more of what was seemingly available - but it's only a minor quibble.

Definitely recommended as a starting point for those looking to explore the exciting vein of cinema known as Blaxploitation. I believe the film's worth the price of purchase if nothing else than to see Priest's venom-spitting final speech to the crooked head cop. This one's the real gritty deal, not one of the painful parodies that infected the genre later on.