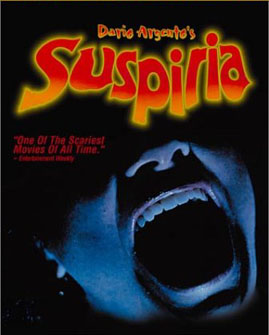 A young ballerina travels to an exclusive ballet school in Italy. As soon as she arrives, two fellow students are mysteriously, brutally murdered. The school seems a hostile place, more deaths occur and our heroine soon discovers a coven of evil witches are in charge. Soon the student is in danger herself, from the persecutory witches and must fight a bloody battle to survive.

A reasonably simple premise, definitely. In the hands of director Dario Argento though, "Suspiria" becomes a delirious assault on the senses. If I had any money to buy a DVD player, this is one of the, if not the, first DVD I'd buy. Argento presents a sonic assault of marvelous intensity from the moment actress Jessica Harper, providing a nice performance, steps out of the airport into a heavy rainstorm. The music from Italian staple "Goblin" starts, and never lets up from there. But it's not just the music. Attacks are preceded by well, supernatural "noise". Wailing, howling, shrieking evil female noise. It creates an incredible atmosphere of fear.

The use of colour and light augment the whole effect. It's like watching a moving painting, at times. Yeah, I'm impressed with this film. The settings are pretty easy on the eye too - even a point and shoot director could have forged some interesting images.

As usual with our friend Dario, it's the murders that are constructed to maximum effect. They're ballets of blood, in themselves. The opening deaths are impressive (Argento used jagged glass hideously well) but there's one scene that has such a hideous climax, that I cringe just thinking about it. Let's just say a pit of tangled razor-wire is not a good place to fall into.

Nothing really lets up, until the final fiery conflagration that devours the witches. Until then though, we've also had a reasonably well-scripted and acted film, mainly due to the presence of Jessica Harper. A lesser actor may have degraded the film a bit, but most of the cast are really just props, to move around the sets and massacre when required. They're certainly good at acting terrified though, which suits the purposes of the film.

Turn out the lights, turn up the volume, and allow yourself to soak up the mayhem. Suspiria is a modern horror masterpiece.