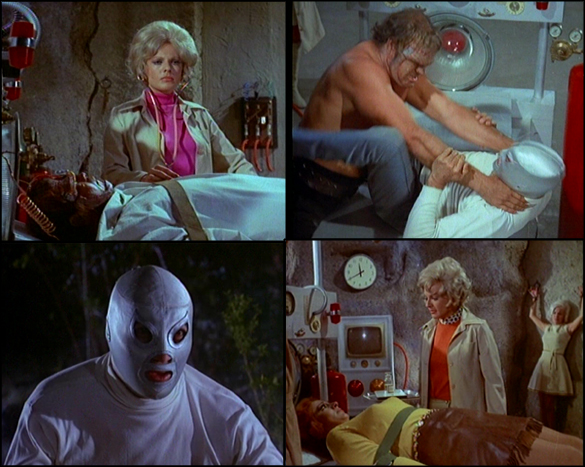 It's quite odd there aren't more El Santo films in these pages. That's because watching one of these is akin to sipping on a hot chocolate in front of an open fire, on a cold Winter's night. A true comfort. You've got the classic monsters, all taken seriously. Colourful Mexican wrestlers doing their energetic stuff. Handsome production values and groovy soundtracks. Someone like me couldn't really ask for much more! This particular entry in the pantheon of Santo is a more focused effort than Santo and the Blue Demon versus the Monsters which throws every monster but the kitchen sink in, and this makes it a superior film. Director Miguel M. Delgado's got a great visual eye and this is not a poverty-row production. Most scenes gleam with colour and gothic atmosphere. Let's feast our eyes on it, then. 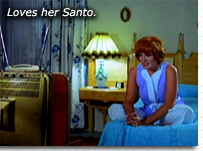 After some glorious credits showing bubbling coloured chemicals in test tubes to cool lounge music, we meet our main villainess. Doctor Freda Frankenstein (Gina Romand), the Dr. Frankenstein's daughter, is over a hundred years old and living in Mexico. She looks and feels young though, thanks to a serum she injects into herself on a regular basis. Unfortunately for her, the serum's efficacy is wearing off and the injections, which cause great agony, are required more and more often. This caused her despair until she watched the great masked wrestler Santo in action many years ago, then again recently, realising that he'd barely aged a bit. Testing a tiny droplet of his blood that she'd caught on a handkerchief, Freda now believes that Santo's blood may hold the key to her eternal youth beyond the serum. Freda's experiments don't just stop at youth serums, though. In a cage she keeps a monster called Truxon, who's been created by injecting one of her badly-behaved henchmen with gorilla blood. The resultant creature is actually like the one from Night of the Bloody Apes and getting more vicious by the minute. Freda's also working on a creature called Ursus who is more like her father's creation, and brings him to life in the opening scenes. She also keeps a horde of henchman compliant to her will by recruiting old men and giving them youth serum, which wears off like her doses do, and keep them coming back for more. So Freda's pretty busy! Her current plan is to have these henchman kidnap Norma (Lucy Gallardo) Santo's devoted girlfriend, whom we meet enthusiastically watching him wrestle on television. Then Santo will be forced to submit to Freda's experiments and desires. 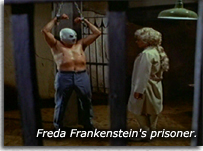 The kidnapping proceeds and the goons leave a note for Santo. Santo gives chase with Elsa (Sonia Fuentes) Norma's platinum blonde sister, who insists on coming along. Meanwhile Freda recruits several old men into her collection of slaves by giving them the injections. Geriatric screams of pain echo around her mansion. The wicked woman then makes an example of one of the henchmen who let her down recently. In front of the others, she lets him go past his injection time and begging and pleading, he withers into a mummy before their eyes. He's placed into a mausoleum along with other victims. Ursus, chained up, escapes and before he's subdued by fire, allows Norma to escape. Santo and Elsa meet with the town sheriff where the note told them to go, but the sheriff is secretely one of Freda's men. Santo and Elsa find Norma in the woods, but Freda and her men attempt to capture them all. Santo fights Freda's men in spectacular Luchador fashion, but is overwhelmed by force of numbers and a threat on Norma's life. Elsa escapes briefly but is captured by the corrupt Sheriff, screaming at his rapidly aging face. Santo is now Freda's prisoner. Chained up like Ursus, Santo rejects Freda's advances - she takes his mask off and sees how handsome he is - and offer to be a great team together, calling her an evil old woman wearing a young mask. Furious, she throws him in Truxon's cage and commands them to fight to the death. A brutal battle ensues. Santo finally gets the better of the vicious, shrieking monster and beats him down with a chain, in a fairly bloody scene. Angered by Truxon's failure, Freda has him shot dead offscreen and devises an even nastier fate for our hero in the silver mask. 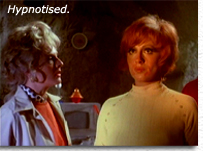 Hypnotizing Norma with some sort of hypnotic apparatus, the vengeful Freda wants Santo's lover to stab his eyes out. One of Freda's one-eyed men leaves them to it in a room, not wanting to see the tied-down Santo lose his eyes as it reminds him of losing his own eye. They hear Santo's screams, but as Freda tends to Ursus, suddenly the masked man and his girlfriend burst in on them - Norma was awakened from her trance by her love for Santo and couldn't go through with it. Freda commands Ursus to attack Santo and he does, but Santo overpowers the monster and he and Norma escape. Ursus and some goons give chase in a cemetary but again Santo gets the upper hand and this time Ursus ends up impaled on a steel arrow. Elsa makes her escape from Freda's cell and catches up to Santo and Norma. Santo waves down a men in a jeep who claims to be his greatest fan and asks him to take the girls into town while he takes care of the evil daughter of Frankenstein. 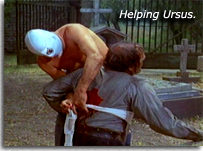 El Santo returns to the cemetary and find the barely-alive Ursus. He takes pity on him, and uses his top to bandage the wound. Ursus is grateful and helps Santo lift the gravestone that marks the secret entrance to Freda's lair. The jeep the girls are in breaks down, and while the driver tries to fix it, Freda's henchmen recaptures Norma and Elsa. Santo enters the tunnel leading into the Laboratory, waving off bats and spiders but is finally bested by sleeping gas pumping out through a mummy's face. Meanwhile Freda is beginning to need another agonising injection as her hands wrinkle up. She screams her way through another dose and chains up Elsa while Norma is strapped to a table. She's about to throw sulphuric acid in her face as Elsa watches - this Freda Frankenstein is one evil scientist! - when Santo bursts in on them. Freda's lead henchman, who obviously loves her, tries to fight the man in the silver mask but come on, it's Santo. Ursus reenters the lab, but as Freda commands him to kill Santo, Santo tells him it's her who's responsible for his misery. Ursus turns on Freda, picking her up by the throat, but she gives him a dose of sulphuric acid in the face for his pains, poor guy. Meanwhile, the ubiquitous lever that blows the lab up in five minutes has been pulled. It's a race against time for survival as Freda's lieutenant tries to help her, to no avail. He sadly watches her age into a dessicated corpse, as the lab begins to blow up. 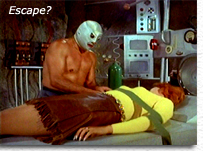 Santo releases Norma and Elsa from their straps and gets them out quickly, shouting at Ursus to follow. Ursus can't do much more than bellow in pain and stumble through the tunnel. The whole complex begins to explode. Santo, Norma and Elsa head for the secret entrance, hoping against hope to escape the conflagration. Will they make it out to daylight and safety. Will Santo live to fight another day, both in the ring and out of it? As I mentioned before, Santo vs. Frankenstein's Daughter is a visual feast by any standard. Director Delgado obviously loves his subject as each character, not just Santo, is filmed lovingly with great closeups. Gina Romand as Freda Frankenstein is a revelation, what an actor she is. Not only beautiful, she's full of passion, anger, hatred and ice-cold ruthlessness, the daughter of Frankenstein is a unique villainess in the roster of horror characters. She can even evoke pity, so desperate she is to remain young that she suffers blazing, tormenting pain to stay in that state. It's a pity she's not more well known. El Santo is a formidable presence but I guess he acts with his body, as, well obviously his face is not a factor. We never see it when Freda briefly removes the mask. Nonetheless, Santo is a physical hero with a unique charisma. The two women are mainly called on to scream, being tied down, chained up or just be general damsels-in-distress. That's not to say thay don't do justice to their roles, with Sonia Fuentes as Elsa having a particularly convincing scream. 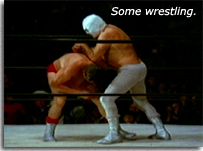 Delgado also throws in some nice trappings of horror whenever he can. Owls, rats, bats and spiders all make their appearance. Fog shrouds night-time cemetaries. Slime drips down underground tunnel walls. Beakers bubble, electronic lights flash and electricity zaps across life-bringing scientific equipment. The music is a sixties lounge music-lover's dream. Then there's the wrestling. Santo's a legendary wrestler and he certainly gives it his all both in, and outside the squared circle. His style is basic but hard-hitting, although he does do some high jumps into groups of unwary goons. We also see two proper matches against a couple of hapless, cheating opponents. Of course, the outcome is predictable - wouldn't it be nice if life was like this?

I can't find a single fault in a film like this. It is what it is, and worth every cent if this sub-genre is your thing. There's no nudity or salaciousness, but this type of picture doesn't need it. It's pure style all the way, and I'm definitely going to increase the mexican-wrestler-horror-movie content of these pages in the fullness of time. Very recommended, and even if you wanted to limit your experience of El Santo to just one film, I suspect in the right frame of mind, most fans of cult cinema will enjoy this one.