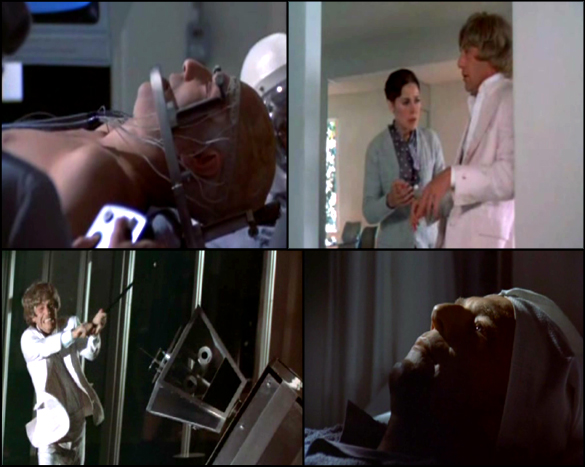 Without a whole lot of blood and hysterics, Mike Hodge's The Terminal Man, based on a Michael Crichton novel, manages to be an effectively chilling little science fiction film from the seventies. I have to say that in my travels of cinema, which are far from complete, this era seems to be a golden age for the science fiction genre. I won't tarry any further on that concept though, as an entire essay is warranted to do it any justice. Besides, there's a murderous psychopath wearing an ugly wig, with a computer chip implanted into his brain, that wants to tells us his story. And he's about to flip out at any moment. 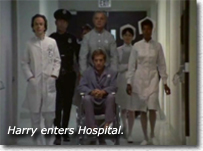 Harry Benson (George Segal) is a man with a big problem. In his previous life he was a computer technician who had developed a serious mistrust of computers and machines taking over the world. Then a car accident changed his life, by damaging his brain. After that, he was afflicted by seizures which caused complete blackouts. After recovering from these time lapses, Harry has no idea where he was, or what had happened. Unfortunately someone has usually been attacked in the meantime, like his wife and kids. After some months of living in this hellish situation, Harry after being imprisoned for his crimes, has volunteered for a radical medical procedure which offers some hope. A microcomputer will be implanted into his brain, power by a small atomic cell inserted behind his shoulder. The computer sense when a seizure is imminent, and sends a pulse of sedative into that part of his brain which is undergoing an attack. In theory, the seizure should be subverted at that point. Doctor Janet Ross (Joan Hackett) has some misgivings, but other experts insist on going ahead with the experiment, which so far has been successful on animals. Harry's a charming and obviously intelligent man, when not having an attack, so he endears himself to all the medical staff around him during the long wait before his operation. 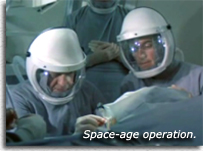 In a very long scene, the experiment goes ahead. Harry's conscious throughout and is only given a local anaesthetic, as the brain has no ability to feel pain. After a few misdirections and problems, the operation is complete and all the multiple sensors and equipment is implanted into Harry. With his head swathed in bandages, the patient is run through a battery of tests as each sensor is tested. As Janet sits with him, Harry is made to feel like he's eating a ham sandwich, burst in hysterical laughter, feel sexual pleasure - directed towards a startled Janet - and even made to cry like a baby. Eventually two sensors are found which seem to be the appropriate channel to deliver the sedative to Harry's hyperactive neurons. As the doctors look on, Harry begins to smell the noxious odour his senses generate when an attack is imminent. Within seconds the concerned man is given a jolt by his implant, his eyes rolling back into his head, and the seizure ends. He smiles his disbelief at the success of the experiment as all the onlooking surgeons, technicians and doctors clap. 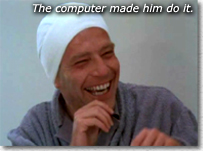 After a couple of days, the euphoria is quickly quelled, when Janet is told by one of her colleagues that what they've been observing with Harry is not good. It seems that he is having multiple seizures each day, because his brain has become addicted to the sedative and is initiating the attacks on a more frequent basis to obtain the reward. On top of that, technicians suddenly report that they cannot observe Benson anymore - he's missing! As they frantically search for the escapee, Harry's picked up in a tunnel by a stripper friend of his, Angela Black (Jill Clayburgh), with whom he was presumably having an affair prior to his operation. Angela had previously delivered a bag to Harry at the hospital which the naive doctors accepted - one of the items was a blonde wig which helped him make his escape. In Angela's apartment, the two make love but later that night Harry begins to have the mother of all seizures, one which his sedative computer can't even stop. Angela ends up stabbed to death on her water bed as Harry stabs frantically on the bed as well, sending water spraying everywhere. These scene is horrifying and haunting at the same time, as music from Bach is played over it, and it's all in slow motion. Rivulets of blood flow into the cracks between the tiles. Bloody murder was never so beautiful to watch. 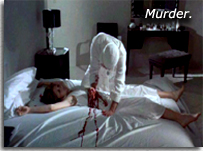 As the death of Angela is discovered, a wholesale manhunt ensues. Harry has his next attack in his own apartment, smashing the robot he'd been working on, then screaming at the world to 'let it stop!'. Segal's a fine actor and we feel the pathos of the situation as this man who began to fear that humans and machines were merging becomes technology's ultimate victim. He then goes to a church to seek some sort of salvation, only to suffer another seizure - they are becoming more and more frequent - and kill the presiding priest off-screen. Having earlier found out where all the doctors involved in the experiment live, Harry finds his way into Janet's apartment and startles the woman who's just gotten out of the shower. She tries to keep him calm. Harry's about to tell her why he ran away, but he's half-psychotic even between seizures now. He comes too close and Janet stabs him with a knife, in self-defense. A seizure is triggered and Benson attacks her, but she manages to get away and hide in her bathroom. Eventually he passes out and disappears, not before almost smashing his way through the door.

As the manhunt continues, Harry steals a pistol and finds his way to a graveyard. As a funeral procession makes its way to an open grave, Harry, wounded and bleeding, and wanting an end to all the lunacy and suffering, allows himself to fall in. Another attack takes place which leaves him a writhing, twitching wreck. Janet finds him there, as well as the accompanying police. He weakly lifts the gun, and a cop in a hovering helicopter thinks he's aiming for him. Can Harry find salvation in death, or will science offer an alternative escape? 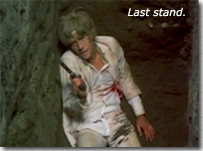 We've got a minor masterpiece on our hands, here folks. Maybe not even that minor! Though not that well-known, Director Mike Hodges does everything right with The Terminal Man. We're given a lot to think about, the nature of man and machine locked into an eternal struggle, and the ethics that are always required by science. In the early scenes there are some nay-sayers about the experiment, but it goes ahead nonetheless, and even as people start dying, the scientists remain cool and unfazed, barely wanting to interrupt their studies and opera. Segal gives a superb performance as Harry Benson, who's an oddball even before his seizures started. We can't help but feel sorry for him, a quiet, intelligent man paranoid about the rise of technology, who inevitably becomes it's victim. Even his performance as a man undergoing horrific, painful mental convulsions is convincing. Once he starts wandering around with a mop-top blonde wig clothed in a white suit, Harry becomes an unlikely, shambling figure of science-gone-wrong. Joan Hackett as Janet also convinces us as a beautiful but cool-minded scientist who's plagued with doubts about the whole procedure, and just wants to help the beleaguered man.

On a production level, The Terminal Man looks fantastic. Most scenes are bathed in white and silver. Homes with sun-drenched, white rooms filled with silver sculptures, white clothes, silver hospital equipment. The perfect sterile world. Classical piano music by Bach is the order of the day, there's no seventies funk on display tonight. We are taken through the whole experience on a day by day basis - title cards reading Monday, Tuesday, and so on, which adds a coldly clinical feel. The main time we see vivid colour is when blood is spilled - when science hits a wall and human chaos enters the picture. Still, when Harry's fate is sealed at the end of the film, we still get the feeling that there'll be more 'terminal men' - and even women. I must add, that this is not a gore film by any means. The blood's minimal compared to many films of the day, but Harry's murder of Angela Black is still jarring and horrifying, as the film had been completely sedate up until then.

If a sophisticated science-fiction-thriller is your filmic cup of tea, I'd definitely recommend this little classic, which should be receiving much more attention than it already does. I'm impressed with everyone involved, and wouldn't mind even watching more George Segal movies! I doubt there'll be a remake as the Hollywood suits probably don't see enough 'happening' to bother with it. There's plenty to think about though, as our society becomes less friendly, and more and more enmeshed with technology. Well overdue for a DVD release, see if you can track it down and take a look.