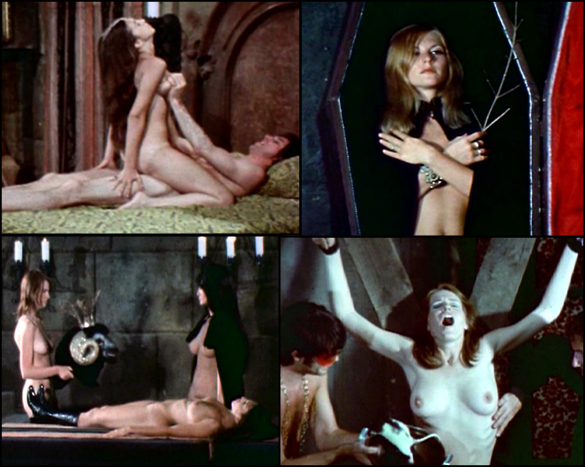 Can a film that doesn't even have a soundtrack, barely runs at over sixty minutes and only exists to show copious nudity and sex be a classic piece of cinema? You bet it can! Director Zoltan G. Spencer has fashioned a fine little entertainment that smacks of an ultra-stripped-down combination of The Rocky Horror Picture Show and Nude for Satan, by way of The Toy Box. With no dialogue recorded - or it was scrapped - we're left with a narration that actually wasn't half bad. As a sex film with a bit of a horror setting, Terror at Orgy Castle is completely successful on it's own terms. Let's take a look at the bare-bones plot and it's resultant pleasures. 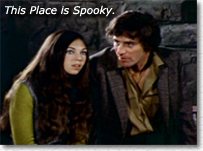 A young couple, the girl particularly stunning with long black hair and voluptuous figure, arrive at a castle. As we're told by our narrator - who's the guy telling us all about their fates in flashback - they figure they've had sex almost everywhere, so one of their ultimate experiences will be to do it in a gothic castle. The travel agent sent them to this one, and a moustache-wearing guy whom they call "Old Igor" greets them. He's not that old, though. They love the interior of the old castle, revelling in the creepiness that's going to enhance their lovemaking. They soon meet their host, 'The Countess.' A sort of beautiful Elvira lookaike, the Countess seems strange but they dine together and figure they'll make the best of it. Later, they settle into their bedroom and have a particularly torrid sex session. Now, If this wasn't real sex, it must have been just a matter of delicate positioning to hold it off! The young guy certainly loves his partner's bountiful breasts, that's for sure. After they're both utterly spent, the guy has some trouble sleeping and leaves his girl to investigate the castle further. 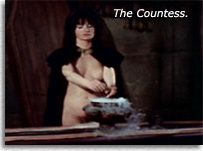 No soon does he venture down into a dungeon than he sees the Countess involved with a strange rite. As two nude girls lie on the floor, she smears some of their body with cream. Wearing only a cape herself, she burns some potion in a brazier and before the startled interloper's eyes, becomes a Satanic-looking man! Pointy-eared, the man ravishes the two girls. After the mini-orgy takes place, the young voyeur flees the weirdness, but the Countess, or is that Count, has spotted him watching. Placing one of the girls in a coffin with a long twig, the Countess makes her dissapear. Back upstairs, the man has returned to his bed and tries to forget the strange events he's witnessed. The blonde girl from the coffin suddenly appears in their room, and promptly seduces him. No sooner does their romp get underway than the other girl from the Countess's revels pops into the room! The man's sleeping partner is blissfuly unaware of the threesome taking place next to her. When the sex is over and the girls leave, the sleeping girl awakens, and wants her partner for her own desires. He's too exhausted though, and bats her away, to her annoyance. 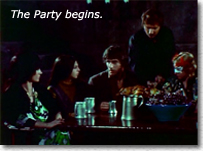 The guy and the girl try to make the most of their stay, when the Countess invites them to a banquet. There seems to be other masked people there who come across as mighty weird. The Countess makes them all drink a green liquid that seems to get the other guests high. As their hostess smiles enigmatically, the revelry begins. As a bellydancer cavorts around, 'Old' Igor brings the food in, which the guests eats with their hands, and turn it into an orgiastic experience of lip-smacking and post-dubbed cackles of pleasure. One of the girls begins to get frisky and strips off, and is promptly lashed to a cross and has a live rat strapped to her belly, imprisoned behind a metal bowl. Two of guys light a candle and place it on the bowl, driving the rat to bloodily gnaw through her in its attempts to escape the heat. As the girl screams and screams, the revellers all get off on her pain. The normal couple begin to freak out, but it's all revealed to be a gruesome magic trick, and the girl laughs as the part-goers applaude. Their senses on fire, two of the guests get carried away and have sex right on the dining table, as the other participants crush bunches of grapes all over them. As the orgy proceeds, the guy and the girl decide to leave straight away, to escape the bunch of sickoes they've just witnessed. They rush upstairs and pack their bags, but as they head downstairs, they find the scene has changed. It's a Satanic black mass that the Countess has convened, and the hapless pair have stumbled right into it. The Countess, using a skull and a pentagram, weaves a web of evil in the room. 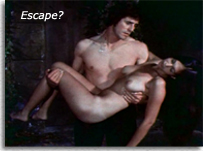 The girl is forced to undress and lie down on a sacrificial altar. The young man is then strapped to the cross and stripped, as two of the women come and pleasure him - and presumably themselves. As he's forced to watch, the Countess summons an invisible Satan into the room, to possess all the men, even Igor. One of them dons a huge goat mask with a crown on it, and naked, has sex with the helpless girl. The reveller then removes the mask, and hands it to another man who places it on his head. Another sex session with the girl takes place. Then another with a different man. Even 'Old' Igor gets a look in! Much later, once it's all over, the distraught man awakens from the delerium to find his lover unconscious on the altar. They're alone, the orgiasts have long since left. He frees himself from the cross and carries her naked form out, and away from the castle. Freedom is close, but the girls awakens and whispers something in his ear ... something that makes escape seem almost impossible. Will our sufferig couple make it back to the real world, or are they trapped forever as another addition to the Countess's prison of perversities?