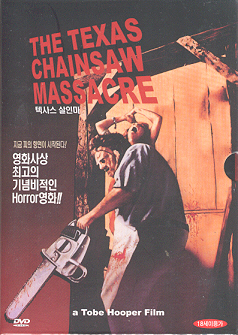 What a classic. Director Tobe Hooper, in my mind, has never really topped this, even after all these years. It's a masterpiece of relentless horror that affects the mind far beyond the standard gorefest. I'll quickly give you a rundown on the plot then spend a bit more time justifying my earlier praise.

Is there a chainsaw massacre? Well, sort of. A group of young Texans are returning to the home of one of the group's deceased grandfather's house. There's a girl, her boyfriend and her wheelchair-bound brother, and another couple. Stopping to pick up a hitchhiker, they soon experience his craziness as he tries to take pictures of them (to sell them back to the group), slashes his own hand with a razor then slashes Kirk, the guy in the wheelchair. Horrified, they throw him out of the vehicle and speed on. They encounter some of the locals in a truck-stop barbeque, and the propietor seems strange but affable.

The true nightmare starts when, trying to get some help from the strange house next to the grandfather's estate, one of their number is ambushed by a huge man in a mask made of parched human flesh. We get to know this beast as "Leatherface". He's a squealing monstrosoity with a sledgehammer, who kills the youth with a few savage blows and drags the still-twitching body through a doorway and slams the iron door shut. A startling scene to say the least!

The next dose of horror we have to swallow is the man's girlfriend, looking for him, finding her way into a room of charnel remains. Bones and rotting flesh everywhere, a chicken hanging squashed in a birdcage. The music, imagery and sound of the poor old chook clucking add up to a scene of sublime strangeness and repulsion. Suddenly Leatherface scoops her up and hangs her, screaming, on a meathook. Starting up his chainsaw, he proceeds to carve up his previous victim. This is one of the most intensely horrific scenes ever filmed, I'm convinced, and guess what? There's no blood shown! Horror film-makers take note.

Worse goes to even worse and finally Sally, the only survivor, has to defend herself against the monstrous Leatherface, the demented hitchhiker, the owner of the truckstop and his ancient, paralysed father, who can only suck blood weakly from her finger while they hold her. They are all one demented family who used to work in the abbatoir business - when it closed down, they simply continued doing what they did best.

Sally manages to escape temporarily from the madmen, but at what cost? And in the end does she truly escape? Watch and find out.

This is one of the few films that has invaded my dreams. I've seen it a few times, but the review-viewing I did recently for this, caused a nightmare that night which impressed me! Not specifically the same storyline, just a feeling from the film. The father is the most frightening character to me, as he generally disapproves of the mayhem but can be coaxed into enjoying it - some of the most uncomfortable moments in the film. But they're all horrific in their own right. The hitchhiker's gleeful sadism is not for the faint-hearted, as is what Sally has to go through. There's a lingering torture in some of the scenes which genuinely disturbs. I hear someone's doing a remake. Can't wait for that one .... NOT!

Marilyn Burns' performance as the main victim is a fantastic study in pain and unbelieving hysteria. Acting, music, cinematography are all perfect for what Hooper is trying to achieve. There's just a general sense of despair, decay, putrescense and sadism to the proceedings that is rare in a genre that often cops out into self-parody and boring irony these days. You want to see real horror, then take a look at this one. There may not be an actual "chainsaw massacre" but there is a lot of chainsaw action, plus far more horror than spraying blood effects and intestines flying could ever achieve.